The study of fossil vertebrates: animals with a backbone.
Vertebrates are members of the Phylum Chordata.
Chordates have a dorsal nerve cord protected by a notochord.
A notochord is a stiff rod of cartilage that protects the dorsal nerve cord; in vertebrates this structure has evolved into the vertebral column that protects the spinal cord.
Note: the phylum chordata does include invertebrates – the tunicates (sea squirts) and cephalochordates (the lancelets).

Amphibians are semi-aquatic tetrapods.
Tetrapods are animals with four limbs and are derived from an ancestral sarcopterygian fish.
Most amphibians have permeable skin, though modern Caecilians do have some scales. Their eggs are gelatinous. The permeable skin and gelatinous eggs restrict amphibians to moist environments.
Many modern amphibians undergo metamorphosis, a transformation from a usually aquatic, fish-like larva to an adult. Modern Amphibians include frogs, salamanders and caecilians evolved in the early Mesozoic. There is also a variety of early stem tetrapods (transitional species between sarcopterygian fish and amphibians) and early Amphibians from the Paleozoic.

Birds or Avian Dinosaurs are closely related to the Theropod Dinosaurs.
Their anatomy is characterized by adaptations for flight, including the modification of the front limbs into the bones supporting the wings, a strongly keeled sternum, and a coating of feathers. Feathers likely developed in a manner similar to the development of fur in mammals – initially as invaginations of the epidermis that developed filaments, followed by the development of barbing that interlocked adjacent filaments.
The keeled sternum provides a large surface area that the muscles that power flight attach to – the muscles then extend to the shoulder and upper arm.
Birds also exhibit a reduced and fused tail bone, the pygostyle.

Fishes are aquatic animals that live in marine or freshwater environments.
They “breathe” using gills that absorb oxygen from water. Fish are divided into 5 major classes – Agnatha, Placodermi, Chondrichthyes, Acanthodia and Osteoichthyes. 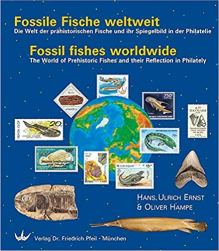 Dr. Hans Ulrich Ernst, coauthor of the book is an active member of the German Mining and Geoscience Philatelic Club (Arbeitsgemeinschaft Bergbau und Geowissenschaften), where he has published many paleophilately-related articles.
The book is aimed at those collectors interested in philately and in fossil fish.
There are detailed descriptions and images of all manner of items related to fish paleophilately including stamps, postmarks and postal stationary known to the date of publication.
The book also includes detailed descriptions of each type of fossil fish depicted on philatelic materials including a brief discussion of fish classification, biology and anatomy, and their fossil record.
Photographs of fossil fish are included for each species depicted on a stamp. The publishers of the book have provided preview pages here. You can still buy this book on Amazon: USA, UK, DE

Mammals are characterized by bearing hair – where the development of hair follicles likely followed a similar pathway to the evolution of filamentous feathers in dinosaurs and birds.
Mammals are members of the amniota – amniotes are vertebrates that lay or had ancestors that laid hard-shelled eggs with internal sacs that supplied the embryo with nutrients and stored waste products.
Reptiles and Birds are also amniotes.
Monotremes are the only living mammals that lay eggs – they include the Duck-billed Platypus and several species of Echidna that are limited to Australia and New Guinea.
The other modern branches of the Mammalia, Marsupials and Placentals both give live-birth.
Marsupials are only found on Australia and the Americas and include animals like the kangaroo, koala and opossum.
Placental mammals are the dominant group today and include everything from Mice to Humans.
Mammals had greater diversity in the Mesozoic as there are several extinct lineages known from the fossil record.
The majority of these fossil mammals are known from teeth or jaw fragments as Mammals have distinctive teeth.
Female mammals feed their young with secretions of milk from their mammary glands.
Mammals are derived from synapsid reptiles.
The synapsids that are more closely related to mammals exhibited teeth differentiation with the development of canines, incisors, and molars. This trait was passed on to their mammalian descendants – and the shape and number of incisors, canines, premolars and molars is often diagnostic when identifying specific species of mammals.

Articles on Stamps Sets focused on several species of Mammals:

Articles on Stamps Sets focused on specific species of Mammals:

Probscidea - Elephants, Mammoths, Mastodons and their relatives:
Prehistoric elephants of Nepal
Mammuthus primigenius from Russia, from Slovenia: [1] and [2] .
Mammuthus meridionalis from Tajikistan.
Mammuthus Trogontherii from Armenia.
Mastodon from Slovenia.
Stegodons from India.

Euryapsids are a group of reptiles that are distinguished by a single temporal fenestra, an opening behind the orbit, under which the post-orbital and squamosal bones articulate.
Euryapsids include Ichthyosaurs, Plesiosaurs and their close relatives.


The History of Ichthyosaurs Discovery.

Diapsids are a group of amniote tetrapods that developed temporal fenestra, an opening behind the orbit, in each side of their skulls.
The diapsids are extremely diverse, and include all crocodilians, non-avian dinosaurs, lizards, snakes and a bunch of other groups
Mosasaur from Denmark
Paraligator

Two excellent Encyclopedias of Dinosaurs, issued recently: The Sauropods (2020) and The Therapods (2018).
Both books are by Rubén Molina-Pérez and Asier Larramendi, the founders and scientific directors of Eofauna, a company that produces scientifically accurate representations of prehistoric fauna.

These books are very well illustrated by famous paleoartists and provides very detailed information about these groups of Dinosaurs: comparisons of the size of species, how long ago they lived, and when they were discovered, shows the positions of the continents at different geological time periods, compares bones, teeth, and feathers and many more.
Both books are available on Amazon
The Sauropods: USA, UK, DE The Therapods: USA, UK, DE

Synapsids are a group of animals that includes mammals, mammal-like reptiles and every animal more closely related to mammals. Unlike Euryapsids, they have a temporal fenestra, an opening behind the orbit, low in the skull roof behind each eye, leaving a bony arch beneath each. 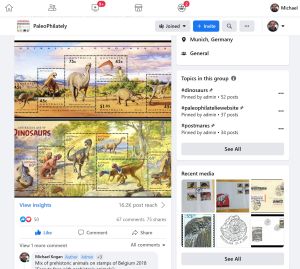 Do you have any question or want to talk about your hobby with collectors who share the same interest?

Join more than 700 members of the "PaleoPhilately" group on Facebook


Acknowledgements:
Many thanks to Dr. Peter Voice from Department of Geological and Environmental Sciences, Western Michigan University, for the draft page review and especially for the summary descriptions of the major groups of vertebrates in this article.