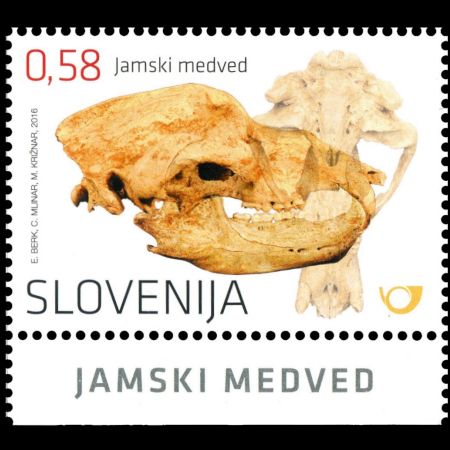 On March 25, Slovenian Post Authority issued a single stamp with fossil of Cave Bear. The cave bear is one of the most typical examples of the Pleistocene megafauna that once roamed the Slovene landscape.

Cave bear remains have been discovered in a large number of sites in Europe and western Asia. The ancestors of the cave bears that inhabited the Ice Age landscape can be traced back more than a million years. The last species of cave bears were omnivorous animals about the size of a cow. There are more than 70 documented cave bear sites in Slovenia. The best known are Potočka Zijalka (a cave on the southern slope of

Olševa), Mokriška Jama (a cave above the valley of the Kamniška Bistrica), Križna Jama ("Cross Cave") near Lož, and the Divje Babe cave near Cerkno. Enormous quantities of bones have been unearthed in the large number of caves where cave bear remains have been found, indicating the presence of up to a thousand animals. Bones found in caves are covered by layers of sediment, while in open-air sites (such as quarries) bones are often discovered by chance. Cave bears used to be known by the scientific name Ursus spelaeus and it was long believed that this was the only species to settle in Europe. In the last decade, however, fresh excavations and genetic analyses have enabled researchers to prove the existence of a number of other species or subspecies of cave bears. These species are distinguished from each other both by genetic differences and by the shape of their skulls and teeth. In Slovenia today we have thus been able to identify the remains of Ursus deningeri (Herkova Jama), Ursus ingressus (Potočka Zijalka and many other caves) and Ursus ladinicus (Ajdovska Jama). The last cave bears in Slovenia died out approximately 25,000 years ago.
Matija Križnar, Department of Geology, Natural History Museum of Slovenia