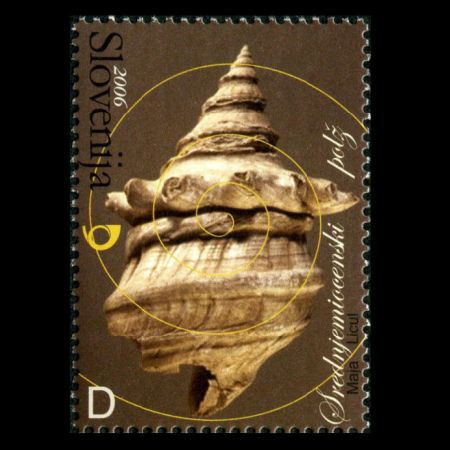 Fossil Snail (Pereiraea gervaisii) The fields and vineyards in the vicinity of entjernej in the Dolenjska region have been famous fossil collecting locations for quite a long time, producing vast numbers of various fossils from the shallow 14-million-year-old Miocene layers of the Krko Basin. The fossils lifted to the surface during ploughing include shells, snails, foraminiferans, otoliths or "fish ear bones", and siliceous algae or diatoms. The most prominent of them all is the fossil gastropod Pereiraea gervaisii (Vezian), which, among others, is also notable for its size (about 10cm long). This gastropod species has a spiralled shell ornamented with long hollow spines in the upper part of the shell. The whorls are distinct and slightly angled. At the end of the last whorl is a large aperture, or opening, which is rarely entirely preserved because it is often subject to mechanical damage during fossilization. Occasionally, the damage was also caused by predatory crab attacks. The aperture is elongated to form a medium long siphonal canal, suggesting that these animals lived burrowed in the sediment (infaunal) and used the canal as a channel through which they elongated the siphons to reach the surface. Another distinctive feature of Pereiraea gervaisii is a calcareous thickening of the parietal region or aperture, also called callus. This is a smooth shelly layer secreted by general surface of mantle allowing the snail's foot greater flexibility in movement. The Miocene gastropod Pereiraea gervaisii is a relatively rare fossil find occurring only in a small area of Europe. This is the reason why the collecting sites in Slovenia have a crucial role in the study of the ancient Miocene sea conditions and the connection of the Paratethys basin in the north with the Mediterranean basin in the south.