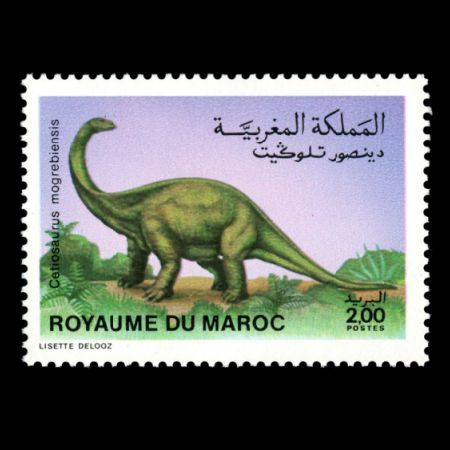 The stamp depict reconstruction of Cetiosaurus mogrebiensis , found near Tilougguite city in Morocco. This specie is described by French paleontologist Albert-Felix de Lapparent in 1955, who undertook a number of fossil-hunting explorations in the Sahara desert. (Lapparent contributed greatly to our knowledge of dinosaurs and other prehistoric creatures. In 1986, Jos Bonaparte named the dinosaur Lapparentosaurus in his honour.)
Cetiosaurus was a long-necked quadrupedal animal approximately 18 meters (59 ft) long. Its neck was as long as its body, and the tail was considerably longer, consisting of at least 40 caudal vertebrae. Its dorsal vertebrae, the bones along the back, were heavy and primitive, unlike the hollowed-out bones of advanced sauropods like Brachiosaurus. Its forearm, too, was as long as the upper arm, unlike most other sauropods. Its thigh bone was approximately six feet in length.
The bones of this animal, the first sauropod described, were unearthed three decades before the term "dinosaur" was coined by Sir Richard Owen. Before then, it was believed to have been an enormous marine creature resembling either a crocodile or a whale. Owen and other scientists continued to believe so until the late 1860s, when Thomas Huxley named it a dinosaur after the discovery of more bones. Cetiosaurus (meaning 'whale lizard'), was a fairly primitive sauropod, with species in what is now England and Morocco, and relatives as far away as India and South America.