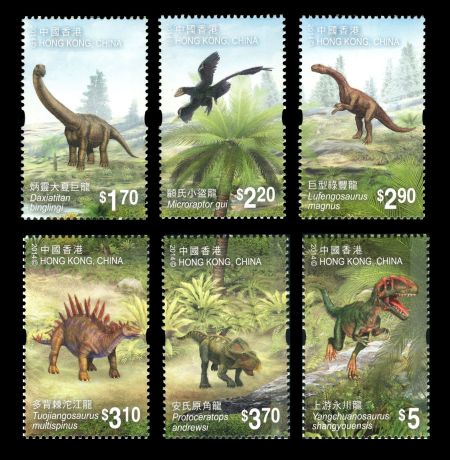 Throughout the extended history of the Earth, there comes a time when dinosaurs first appeared about 200 million years ago and become the ultimate ruler of the planet for 130 million years. Over long periods of time, the ancient landmass Pangaea broke apart into different continents as a result of plate tectonic movements. Dinosaurs evolved into a whole family of different species in order to adapt to the changing environment, but they ultimately could not escape from extinction and all disappeared from the Earth 66 million years ago. Thanks to the efforts of paleontologists, today we can have a glimpse of how dinosaurs had lived and reigned from the large number of fossils unearthed. Dinosaur fossils can be found on all continents and more than 1,000 species has been named. Today, China has become one of the places in the world where most dinosaur species are discovered and many of them are unique.
At present, China has over 170 recorded dinosaur species. Hongkong Post issues a set of six special stamps on "Chinese Dinosaurs" which introduces six unique Chinese dinosaur species, with a view to enhancing the public's understanding of Chinese dinosaurs.
This set of six special stamps on "Chinese Dinosaurs" is printed with a luminous effect that makes the unique features of the Chinese dinosaurs glow in the dark. Moreover, the postage prepaid picture card, with 3D printing effect, makes the six dinosaurs more vivid. Set against the environment where dinosaurs lived in prehistoric times, the souvenir sheet in a block stamp design showcases dinosaurs from different periods. Glow-in-the-dark effect shown on the souvenir sheet after absorbing UV light


A fascinating new series of exhibits on “Fauna and Flora” displayed at the Postal Gallery located on Ground Floor, General Post Office from 13 February 2014 to 4 May 2014.
This exhibition presents a retrospective of stamps and philatelic products on the common and native fauna and flora in Hong Kong, including the rare and precious species, released by Hongkong Post over the years, aiming to enhance public awareness of fauna and flora and cultivate public interest in local nature conservation. Stamps on similar themes issued by China Post and Macao Post will also be exhibited at the venue.
Furthermore, as a preview of “Chinese Dinosaurs” stamp issue to be released on 20 February 2014, stamps, souvenir sheet and associated philatelic products are also on display. To add philatelic attraction and fun to the exhibition, a brief introduction on the 6 dinosaurs portrayed in the new stamp issue “Chinese Dinosaurs” are presented also.

Acknowledgement: Many thanks to Yulei Xia and Edward Hong for their support