Contents:
Hong Kong, officially the Hong Kong Special Administrative Region of the People's Republic of China, is an autonomous territory south of Mainland China at the Pearl River Estuary of the Asia Pacific. With a total land area of 1,106 square kilometres and a population of over 7.3 million of various nationalities, it ranks as the world's fourth most densely populated sovereign state or territory.
After the First Opium War (1839–42), Hong Kong became a British colony with the perpetual cession of Hong Kong Island, followed by the Kowloon Peninsula in 1860 and a 99-year lease of the New Territories from 1898.
Pursuant to an agreement signed by China and the UK on 19 December 1984, Hong Kong became the Hong Kong Special Administrative Region of the People's Republic of China on 1 July 1997.
In this agreement, China promised that, under its "one country, two systems" formula, China's socialist economic system would not be imposed on Hong Kong and that Hong Kong would enjoy a "high degree of autonomy" in all matters except foreign and defense affairs for the subsequent 50 years. [R1]


Notes:
[A1] The stamp with face value of $1.80 shows "Science Museum".
The Museum had its grand opening on 18 April 1991.
In January 2000, Leisure and Cultural Services Department is set up to replace the Urban Council and the Regional Council to oversee the operation of the Hong Kong Science Museum and all the government museums, taking the development of Hong Kong's museums into a new era.

The Life Sciences Exhibition Hall illustrates the wonders of life. It covers different aspects of life sciences including prehistoric life, structures of human bodies and functions of the organs, bones of human being as well as different animals, include dinosaurs, conventional and contemporary concepts in medical sciences, etc.
Visitors could explore the mysteries of life sciences through these exhibits. [R3]

Personalized "FDC" with dinosaurs illustration, issued 6 weeks after the stamps release, red mark on the bottom side, depicting Triceratops, used for decoration purpose only - it is not a postmark. 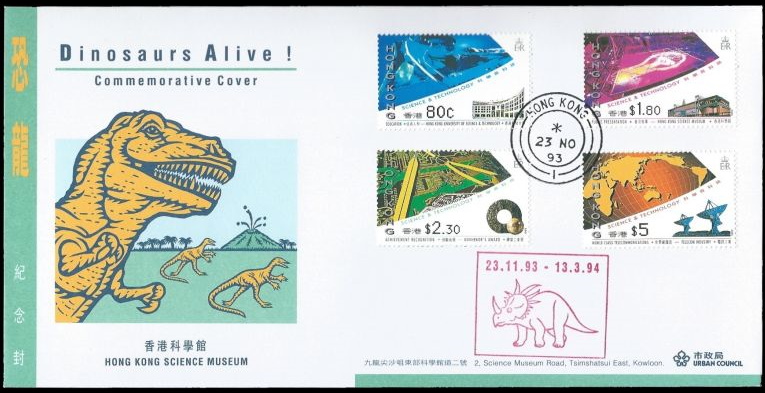 [A2] These stamps shows various Geo-Conservation landscapes of Hong Kong. One of these stamps (face value $2.20) shows landscape Wong Chuk Kok Tsui - the location is well known as Devonian fossils are found there.
Note: The object shown on the stamp is not petrified wood, but a rock depicted on the stamp.

Wong Chuk Kok Tsui is located in the Port Island-Bluff Head Geo-Area. It has the oldest rocks in Hong Kong, including sandstone and conglomerate formed around 400 million years ago, based on fossils found there, is a bed of Devonian sedimentary rock.
These rock strata have been tilted and compressed into a more or less vertical position. Further coastal erosion resulted in the formation of a peculiar rock structure, known as the “Devil’s Fist”. The rich Devonian fossils found in Tolo Channel provide a strong basis for determining geological age and sequence stratigraphy. [R4]

[A3] Danxia Mountain was added to the China Danxia World Heritage Site in 2010 due to the unique landscape and spectacular scenery. The local bedrock consists of a reddish sandstone, which has been eroded over time into a series of outcrops including spectacular cliffs and pillars of rock. The site has a long history of development with plentiful scenes and sights of cultural interest.

Our ancestors used to live near Danxia Mountain a long time ago. A significant find here was of the famous Maba Man found in the southwest of Danxia basin. The pieces of the skull were found in June 1958 in a cave at Lion Rock near the town of Maba in Guangdong Province, China. Its age is estimated to be between 200,000 and 300,000 years old. The fossil was described as an intermediate form between Homo erectus and Homo sapiens. [R5]

[A5] These new definitive stamps are defined by the original designs of the 2014 Definitive Stamps that feature unique geo-attractions of the Hong Kong UNESCO Global Geopark, and portray Ma Shi Chau, Yan Chau and Fa Shan.
At least one of these stamps shows a place where fossils have been found.
The rock formation at Ma Shi Chau contains a variety of fossils such as crinoids, brachiopods, pteropods and corals. From these fossils, geologists have determined that the rock layers formed during the Permian period, about 270 million years before present. [R7]