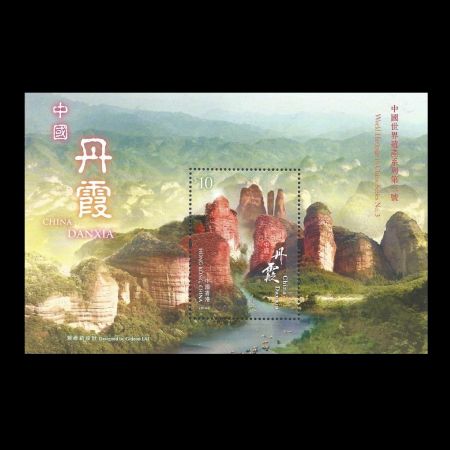 Hongkong Post released stamp sheetlet No. 1 of the World Heritage in China Series in 2012 and No. 2 of the Series in 2013, showcasing the magnificent vistas of the Great Wall and the Old Town of Lijiang respectively. The stamp sheetlet on the World Heritage in China Series No. 3: China Danxia further presents us with the wondrous and amazing natural heritage of our motherland under the theme of China Danxia.
China Danxia was inscribed on the World Heritage List by the World Heritage Committee under the United Nations Educational, Scientific and Cultural Organization (UNESCO) in 2010. It comprises Taining in Fujian, Langshan in Hunan, Danxiashan in Guangdong, Longhushan in Jiangxi, Jianglangshan in Zhejiang and Chishui in Guizhou. Developed on continental red terrigenous sedimentary beds influenced by endogenous forces (including tectonic uplift) and exogenous forces (including weathering and erosion), Danxia landforms are characterized by spectacular red cliffs and a range of erosional landforms, including dramatic natural pillars, towers, ravines, valleys and waterfalls.
In the background of the stamp sheetlet is Langshan in Hunan, presenting the unique landforms of China Danxia through the extensive, magnificent peak forest defined by domed mountains. Jianglangshan in Zhejiang is depicting in the rear middle, with lofty isolated mountains soaring high into the sky, creating a spectacle. In the left foreground is Danxiashan in Guangdong, a breathtaking wonder composed of red precipices at an altitude of several hundred metres. On the front right is Longhushan in Jiangxi. Towering over the adjacent riverbank, the precipitous peak forest is as beautiful as a landscape scroll. Langshan in Hunan, Jianglangshan in Zhejiang, Danxiashan in Guangdong and Longhushan in Jiangxi each have their distinctive geological features. With the aid of computer technology, these Danxia landforms are perfectly interwoven and displayed on the stamp sheetlet. The splendour of nature is beautifully presented for all to see.
In the same cave where Maba Man was discovered, a large quantity of animal fossils of the Fourth Ice Age has been unearthed. Maba Ma is the pre-modern hominid whose remains were discovered in 1958 in caves near the town called Maba, near Shaoguan city in the north part of Guangdong province, China. The Maba Men lived in caves at Lion Rock, near Maba. The site is now a park and tourist attraction including the possibility to visit the cave and a museum nearby. Maba Man was an early Homo Sapiens of the middle Paleolithic Age. The skull fossil-found here belonged to a middle-aged man. The skull had very coarse superciliary arches and an extremely contracted orbital surface. The frontal bone was longer than the parietal bone. All these indicate the primitive character of Homo Erectus, although the skull had thin walls and the brain was larger than Beijing Man. Thus, it has been classified as Homo Sapiens. Actually, this individual represented a transitional state from Homo Erectus to early Homo Sapiens. These remains can be dated between the Middle and Late Pleistocene Epochs -- about 200,000 to 100,000 years ago.
Fossils of many mammals: hyenas, pandas, bears, tapirs, porcupines, saber-toothed elephant, elephant, etc. found at the same area with Maba Man fossil - The image above shows: fossil cranium of the Maba Man: (up-left); Fossil teeth of the Stegodon: (up-right); Fossil mandible of rhinoceros: (bottom-left); Stone hammer: tool (left of the bottom-right, diameter is 5.8 cm); Stone chopper: tool (right of the bottom-right, length 15. 8 cm).
Images below: Maba Man Museum Site (left), Maba Man Site location - Lion Rock - fossil-found site (right). This images are from UUA.cn site.