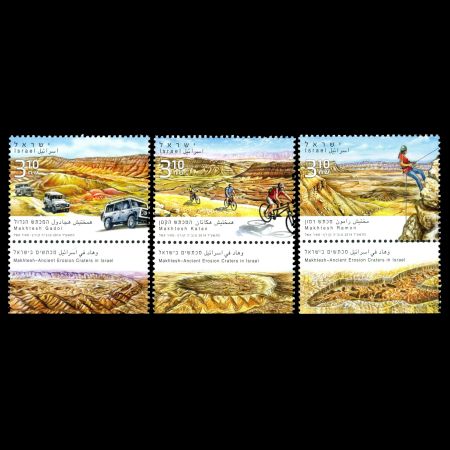 On February 11, 2014 Post authority of Israel issued a set of 3 stamps "Makhtesh – Ancient Erosion Craters in Israel".
The dynamic earth has formed almost unique geological landforms in the Negev desert. Initially, a layered sequence of hard limestone and dolomite rocks was deposited over softer sandstone sediments. The sequence was folded into asymmetric folds, producing four parallel, northeast - southwest, topographical ridges. An erosion surface removed the hard limestone and dolomite rocks of the fold’s crest, exposing the underlying friable sandstone, which was eroded, forming a deep transverse valley. The creeks drain into the Dead Sea - Arava valley, through a single outlet, incised into the southeastern flank. The closed valleys are surrounded by steep cliffs, 200–400 m high. A This type of breached valley or erosion crater of this sort is known as a “makhtesh”. A makhtesh is a “geological window”, through which the ancient strata are revealed.
A makhtesh contains a variety of different colored rocks, and diverse fauna and flora. The area of each makhtesh has been declared a nature reserve, providing an ideal location for recreation and leisure with trails for hiking, cycling and jeep tours.