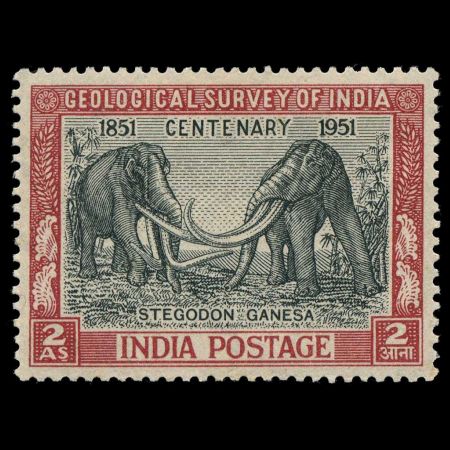 On commemoration of Indian Geological Survey centenary on 13th January 1951 Indian Postage released The stamp shows two individuals of Stegodon ganesa, the first ever reconstruction of a prehistoric animal on a stamp.It was valued 2 Anas.Ana the olden Indian coin was in use before 1956. In 1956 Indian Government introduced Paise the hundredth fraction of Rupee the currency.16 Anas are equal to One Rupee.
The stamp is based on picture published by Henry Fairfield OSBORN in "Proboscidea. A monograph of the discovery, evolution, migration and extinction of the mastodonts and elephants of the world. Vol . 2, Stegodontoidea, Elephantoidea." , issued in New-York, USA in 1942. (1st edition of the book from 1936, 878 pages, can be downloaded from Open Library web siite) 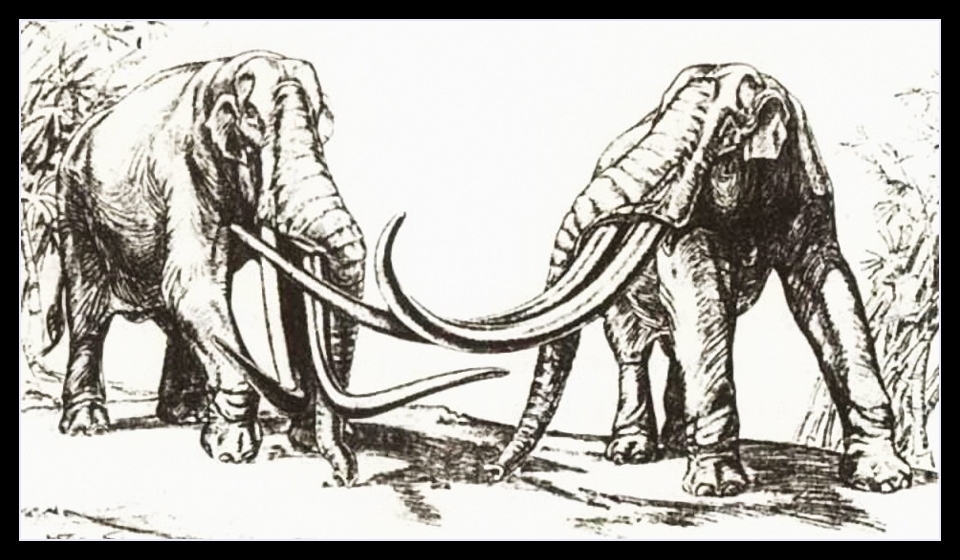 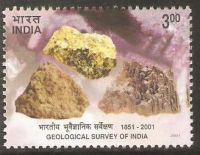 Note: On March 4, 2001 a another stamp was issued by the Department of Post, Government of India, to commemorate 150 anniversary of Indian Geological Survey This time geological motive has been choosed. The four colour stamp shows bauxite (aluminium ore), chalcopyrite (copper ore) and psilomelane (manganese ore). The denomination of the stamp is 300 paise (Rs.3.00)


Stegodon ganesa
In 1928 century 3 metre long fossil tusk of an elephantine mammal Stegedon ganes a found in India by Dr. Darashaw Nosherwan Wadia (October 25, 1883 - June 15, 1969) who pursued his personal research on stratigraphy, structure and palaeontology of the Kashmir Himalaya with single-minded devotion. Having a very keen eye for observation, he worked towards identification of broad structural elements of the NW Himalaya. The fossil tusk is now kept at the Museum of the Geology Department of the Jammu University. The discovery of this skull, which was found in association with fossil ganoid fish and pteridospermous plants, led to the fixing of the age of an important geological rock formation in the Kashmir Himalaya to the Permo-Carboniferous time (355 - 250 million years).

Stegodons are primarily an Asiatic group of mammutid origin, this family is believed to have evolved sometime by the middle Miocene, nearly 15 MY ago and became extinct by the late Pleistocene about 30,000 - 40,000 years ago. Stegodons appear to be transitional between true mastodons on the one hand and true elephants on the other.
Like elephants, stegodonts must have been good swimmers. Their fossils are frequently encountered on Asian islands, which even during periods of low sea-level (during the cold phases of the Pleistocene) were not connected by land bridges with the Asian continent . A general evolutionary trend in large mammals on islands is island dwarfing. The smallest dwarf species, Stegodon sondaari, known from 900,000 year old layers on the Indonesian island of Flores, had an estimated body weight of 300 kg (661 lb), smaller than a water buffalo. A medium to large sized stegodont, Stegodon florensis, with a body weight of about 850 kg (1,874 lb), appeared about 850,000 years ago, and then also evolved into a dwarf form, Stegodon florensis insularis. The latter was contemporaneous with the hominin discovered in 2003, Homo floresiensis, and disappeared about 12,000 years ago.Stegodon tetrabelodon syrticus was a spectacular late Miocene species with four tusks described from a partial cranium and jaws found in North Africa

Note: This page is incomplete, some info is missing. In case you have the any additional information please email to me. Acknowledgement :

Many thanks to fellow stamp collector Kasinath Ra from India, for his help to find some additional information about these stamps