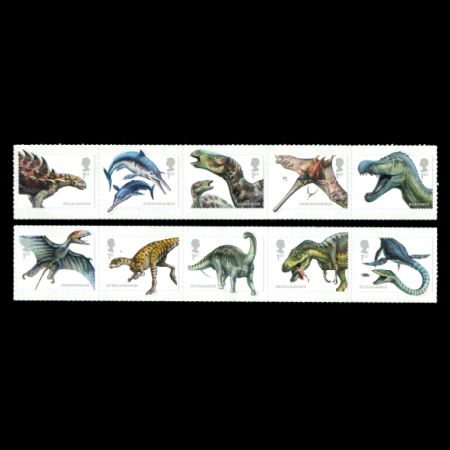 On October 10, 2013 Royal Mail, first time since 1991, launched a set of ten self adhesive stamp of "Dinosaurs" (actually four animals depicting in these stamps are not dinosaurs, but flying and marine reptilies: Dimorphodon Ornithocheirus, Ichthyosaurus, Plesiosaurus ). The new stamp collection is designed to celebrate the 200 year history of paleontology in Britain and the discovery of a multitude of dinosaur remains in Britain by British paleontologists.

Dinosaurs have often been associated with North America and the exploration of the Wild West that began in the 1870s, but as mentioned above the earliest discoveries of dinosaurs and their contemporary marine and flying reptiles happened in England during the early 1800s. The dinosaurs in this 10-stamp set have strong connections with the following locations in Great Britain:

LYME REGIS - DORSET
The cliffs and foreshore are the world’s most important and famous sites for marine reptiles that lived 201-195 million years ago. ICHTYOSAURUS and PLESIOSAURUS swam in the shallow seas that covered Dorset. The pterosaur DIMORPHODON flew over the water and occasionally fell in.

OXFORDSHIRE
MEGALOSAURUS, the first dinosaur to be named, came from Stonesfield Quarry near Witney. CETIOSAURUS was discovered in several locations during the 19th century, including Chipping Norton and Bletchington Station, notable for the most complete skeleton found.

OCKLEY - SURREY
The only fairly complete skeleton of the fish-eating dinosaur, BARYONYX, was discovered in a working brick-making clay pit at Wallis Wood, near Dorking, in 1983. Remains of IGUANODON and a SAUROPOD have also been uncovered there.

The fossils from seven of the ten depicting dinosaurs have all previously been found on the Isle of Wight, many of which are on display at Dinosaur Isle in Sandown. Isle of Wight palaeo-artist John Sibbick was selected from a number of expert artists as he is one of the foremost illustrators of dinosaurs and has decades of experience. It was felt that Sibbick’s painterly approach gave a more detailed realisation of the animals than tests with computer generated imagery at stamp size. The stamp designs in this issue are printed such that the creatures ‘break out’ of the self-adhesive stamp frame, so there is not a clean straight edge to the stamp.
Mr. Sibbick said: "I always knew that designing and illustrating stamps was a rigorous and painstaking process. To get the opportunity was a dream come true, especially depicting the world famous dinosaurs found on the Isle of Wight. To get such access to fossil dinosaur bones, tracks and the plants in their environment on the Isle of Wight makes the reconstruction process a much more vivid experience." The museum will host an exhibition telling the story of the creation of John Sibbick's work.The stamps have been produced under the guidance of palaeontologists from the Natural History Museum, including the Angela Milner. (who is along with Alan Charig, her colleague at the Natural History Museum in London, named and described Baryonyx, one of the dinosaurs featured in the set. ) Each illustration is anatomically correct to the extent of present scientific knowledge.

The exciting Dinosaur Island App Trail based on the ancestral links between the characters in the film and the dinosaurs on the Isle of Wight, will give you the chance to be seen standing alongside dinosaurs in the very place they were discovered. The app utilises new technology which allows you to use smart phones and tablets to take pictures of family and friends walking alongside the dinosaurs that roamed the Isle of Wight 130 million years ago, while at the same time learning more about their relatives - the dinosaur characters in the movie. The Augmented Reality App is available to download from anywhere in the world, but will only be triggered into life at six coastal locations on the Isle of Wight.

These stamps presentation, to public for the first time, took place at the Natural History Museum in London on October 7, 2013 - few days prior to official release. Broadcaster and naturalist, Sir David Attenborough said; “It was a British scientist, Sir Robert Owen, the first Director of the Natural History Museum, who first identified a dinosaur and who invented that name for the whole group. The sheer size and variety of these extinct reptiles captivates people of all ages and inspires children’s imaginations. They are perennially popular and have inspired countless books, films and television series. These stamps are a wonderful reminder of the majestic creatures that once roamed what is now Great Britain hundreds of millions of years ago.”

Dinosaurs dominated the Earth for more than 160 million years during the Mesozoic Era, 252 to 65 million years ago, often called the Age of Dinosaurs. They shared the planet with many other animals including marine reptiles, ichthyosaurs and plesiosaurs, and flying reptiles called pterosaurs. The first finds of all these ancient groups were made in southern England in the early 1800s. Thus began our ever-growing fascination with this long-lost world.

The Ichthyosaurus, the Plesiosaurus and the Dimorphodon were all first discovered by Mary Anning (famous British fossil collector, dealer, and paleontologist) on the beaches of Lyme Regis at the beginning of the 19th century, and their fossilised remains can still be found along the Jurassic Coast today.
Mary Anning and her brother Joseph discovered the first ever Ichthyosaurus in 1811 on the beaches between Lyme Regis and Charmouth. Mary continued to find fossilised remains of the Ichthyosaurus during the next ten years, before discovering the Plesiosaurus in the winter of 1828.
David Tucker, curator at Lyme Regis museum, said he was delighted the Royal Mail had commemorated Anning’s finds in the stamp collection, he said “The collection is very interesting and shows the very strong local connection in marine reptile fossil discovery and I’m delighted they have chosen three of Anning’s discoveries. I will certainly be getting some of the stamps, and I am very pleased to see them.”

The stamp set was originally scheduled for release last year (2012), to mark the centenary of the publication of ”The Lost World”, a novel by Sir Arthur Conan Doyle that tells the story of an exhibition to South America led by Professor Challenger that discovers a whole host of prehistoric animals surviving on a remote plateau. Ironically, a number of animals featured on the stamps such as the Iguanodon along with the Pterosaur Dimorphodon and the marine reptiles are featured in this book. The South American Spinosaurid Irritator, a dinosaur from the same branch of the Theropoda family tree as Baryonyx has a link to Sir Arthur Conan Doyle’s novel. The specific name for Irritator (Irritator challengeri) is a reference to Professor Challenger, the central character in the book. Finaly the stamps launched end of 2013, only two months prior to UK Premiere of WALKING WITH DINOSAURS: THE 3D MOVIE

Some more details prehistoric animals depicting on the stamps: