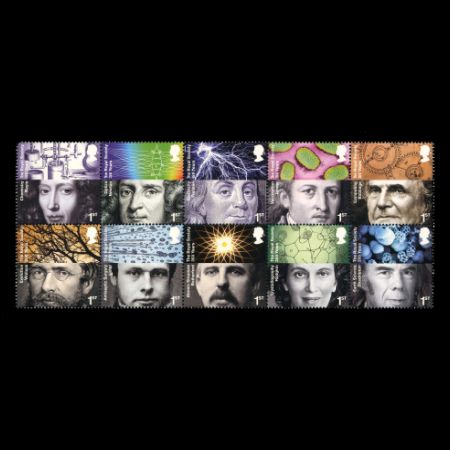 This year is the 350th anniversary of The Royal Society, the worlds oldest scientific academy in continuous existence. In celebration, Royal Mail has today released ten 1st class commemoratives featuring significant Royal Society figures whose portraits are paired with dramatic and colourful imagery representing their achievements.
The brainstorming design was the idea of Hat-trick Design, responsible for the interlocking jigsaw approach used for the 2009 Darwin stamps. But with more than 1,400 Fellows and Foreign Members to choose from, how were ten significant scientific figures to be selected?
Fittingly, it was The Royal Society itself which suggested the solution: a case of basic division. It was agreed to split the 350-year history into ten 35-year blocks in which it could be demonstrated how, through the work of its Fellows, The Royal Society has had a major impact on the World.
Royal Mail consulted with experts from the Society to determine the ten Fellows, and due to the global nature of the organisation, non UK citizens were included, such as one of the United States Founding Fathers, Benjamin Franklin, and the New Zealand-born physicist Ernest Rutherford.
Founded in 1660, The Royal Society celebrates its 350th Anniversary in 2010 and as the National Academy of Science of the UK and the Commonwealth. It maintains its position at the forefront of inquiry and discovery, and at the cutting edge of scientific progress.
The backbone of the society, which is a charitable body, is its fellowship of the most eminent scientists of the day, and there are currently more than 60 Nobel Laureates amongst the societys Fellows and Foreign Members, of which there are more than 1,400. To this day, Fellowship of The Royal Society is one the greatest honours that can be conferred on any scientist.
The origins of the society lie in an invisible college of natural philosophers who first met in the mid 1640s and were united by a common desire to better understand the world and the universe through observation and experimentation. This spirit of empirical observation is encapsulated in the societys Latin motto, nullius in verba, which can be roughly translated as take nobodys word for it.


Special postmarks announced for the Day of Issue.