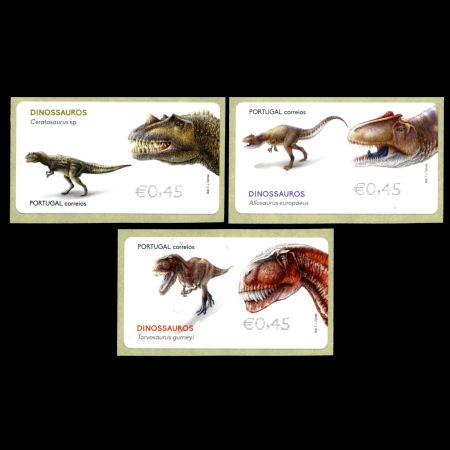 On May 4 of 2015 Post Authority of Portugal introduced 3 new self adhesive ATM stamps. Similar to stamps from 1999-2002 they are sold at Newvision E-Post 2000 stamp machines with predefined values. However, it was possible to obtain stamps with other values from the E-Post 2000M stamp machine. These kiosks are fitted with a scale, and users can buy stamps according to weight, destination, and type of shipping required.
Two special commemorative post marks designed for stamps presentations in Lisbon and Porto on the day of stamps issue (nowadays, Post of Portugal is always made two post marks one for Lisbon and another for Porto , the second big city of Portugal, to provide an possibity to more philatelist to cancel some covers and stamps ). Addition commemorative post mark is design on request of Lourinha city community. Lourinha is the place where fossils of all 3 dinosaurs found and where it can be seen in “Museu Da Lourinha”

There are three dinosaurs on the stamps:, including Allosaurus europaeus, Torvosaurus gurneyi and Ceratosaurus sp. The stamps were illustrated by Fernando Correia who has been one of the paleontological illustration promoters in Portugal and a member of the International Competition Jury of Dinosaur Illustration (IDRC) sponsored by GEAL - Museu da Lourinhã.