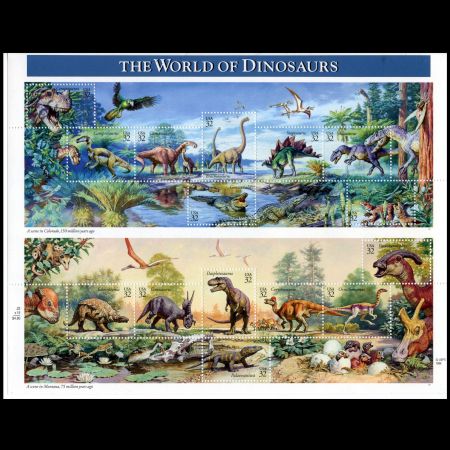 "The United States Postal Service has a rule: A person must be dead for at least ten years before they can appear on a stamp," says artist James Gurney. "Dinosaurs have been dead for 65 million years, so they definitely qualify!" In the 150-year history of the U.S. postage stamp, dinosaurs have been featured only twice.

So you can imagine how thrilled James Gurney was to be selected to create the art for the dino stamps--"The World of Dinosaurs"--released May 1, 1997, by the U.S. Postal Service.
Gurney was chosen to create "The World of Dinosaurs" stamps by members of a special U.S. Postal Service committee. The committee asked Gurney to produce a scene that would include four dinosaur stamps. Gurney chose four dinosaurs that actually would have lived at the same time in North America. In September 1995, he quickly sketched a design that included the head of a T. rex and the bodies of three other dinosaurs.
Members of the stamp committee loved Gurney's sketch, so they asked him to do a new sketch that would include more dinosaur stamps. In January 1996, Gurney drew up a new design that included two scenes, each with five dinosaurs. One scene showed dinosaurs of North America during the Cretaceous period; the other showed dinosaurs of the Jurassic period. 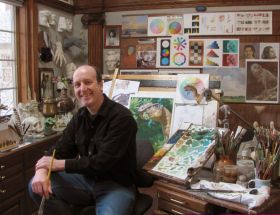 At this point, Gurney's stamp project was still top secret. He wasn't allowed to tell anyone one about it! But Gurney wanted to be sure that his artwork was scientifically correct. He wanted to be allowed to talk with a few dinosaur experts to be certain that the dinosaurs and their habitats were accurate. The Postal Service gave Gurney the OK to talk to the experts---but to no one else!
"The scientists provided me with lots of information about other creatures and plants that would have shared the world with dinosaurs," Gurney says. "Those creatures included frogs, turtles, insects, crocodiles, mammals, and birds." In addition, the experts provided information about plants that would have been part of the dinosaurs' world.
One of the scientific advisers Gurney consulted with was prominent U.S. paleontologist Jack Horner. Horner's discoveries have significantly advanced the world's knowledge of dinosaurs. The scientist also served as a consultant for the Steven Spielberg films "Jurassic Park" and "The Lost World." Next, Gurney was ready to begin his final sketch. His goal was to show the rich and diverse ecosystem in which the dinosaurs lived. "There were plenty of plants and animals that looked a lot like what you would find today in Florida," he says.
"I wanted the picture to tell a variety of stories," Gurney continues. "Not only predators looking for a meal, but also babies hatching from eggs and mammals hiding in trees. To show a fossil in the making, I placed a skull of one dinosaur in the mud at the edge of a pond."
The stamp committee gave the OK to Gurney's final sketch, so he went to work on the painting. As he was completing his work, one member of the stamp committee happened to suggest that some of the creatures in the art of the scene's margins might make nice stamps too.
"He was right," Gurney says. "It was a great idea. There were indeed at least five more stamp designs hidden away!"
So Gurney touched up his painting to make the five new stamps.
"At one point we even thought of having yet another extra stamp of the nest full of hatchlings," Gurney says. "Take a close look at the scene and you can see the white egg is set up as a space for the `USA 32.'"
Only one problem remained: Where would the perforation holes be placed that divided the stamps from each other?
"It was very important that a person could tear up the sheet easily to get at the stamps without being confused about what were stamps and what were scraps," Gurney explains, noting that the scraps might be fun to use as decoration stickers once the stamps were torn away.
"Of course, everyone at the Postal Service hoped that people will get a couple sheets, one to use for stamps and another to keep untouched in a drawer or a stamp album," says Gurney.
"As for me, I'd like to stick the whole sheet on my T-shirt and mail myself to the Mesozoic era via Priority Mail," he added.
The World of Dinosaurs stamps were rushed for issue on May 1, to coincide with the release of the Steven Spielberg sequel to "Jurassic Park - The Lost World." This blockbuster movie thrilled audiences with its lifelike depiction of dinosaurs. First Day of Issue ceremonies for the stamps were held at the Dinosaur Valley Museum in Grand Junction, Colorado - located in the heart of the world-famous "Dinosaur Triangle." This Triangle, which extends from western Colorado to northeastern Utah, has produced a wealth of dinosaur excavation sites.


Other psrehistoric animals on the sheet margin: