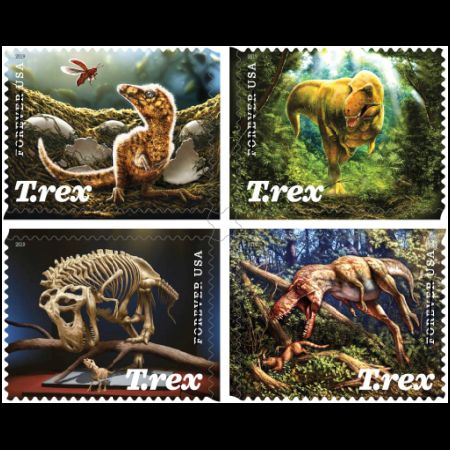 On August 29th 2019 Post Authority of USA (USPS), issued set of four stamps dedicated to Tyrannosaurus rex.
Last time Tyrannosaurus rex appeared on US stamp in 2000, but this stamp was dedicated to Jurassic Park movie. Stamps dedicated to dinosaurs as animals issued by USPS issued last time in 1997, "The World of Dinosaurs" - sheet of 15 stamps divided by two scenes: 'A scene in Colorado, 150 million years ago' on top and 'A scene in Montana, 75 million years ago' on the button.

Forever stamps depicting the awe-inspiring Tyrannosaurus rex in growth stages from infancy to adulthood and are always equal to in value to the current First-Class Mail® one-ounce price. [R4]
Similar to prehistoric animal stamps from 1989, these stamps also issued in sheet, two sets in a row with opposite stamps order. Every second rows allows "square" combination: 2 by 2 stamps.

Two stamps depict a newly hatched T. rex covered with downy feathers and a bare-skinned juvenile Tyrannosaurus. rex chasing a primitive mammal. The third illustrates a face-to-face encounter with a Tyrannosaurus rex approaching through a forest clearing; another shows the same young adult T. rex with a young Triceratops — both dinosaurs shown in fossil form.
The skeleton illustration is modeled after a remarkably complete T. rex fossil found in Montana in 1988. Originally installed in the Museum of the Rockies and called the "Wankel T. rex," the 38-foot-long (12-meter) skeleton is now known as "The Nation's T. rex," and has a new home at NMNH. It was unveiled to the public when the museum's newly renovated dinosaur hall — The David H. Koch Hall of Fossils: Deep Time — was reopened on June 7.
The details of that scene would have been difficult to capture in the small frame of a postage stamp, paleoartist Julius Csotonyi told Live Science. Instead, the skeleton stamp shows the enormous carnivore peering down not at an adult triceratops, but at a diminutive baby. Csotonyi created the original artwork for the stamps in collaboration with art director Greg Breeding, according to the USPS statement. [R1] 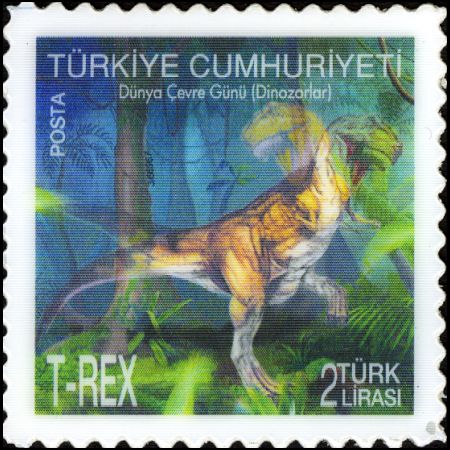 Two of the four T. rex stamps that illustrated for the US Postal Service employ lenticular technology, causing the image to shift in appearance as you rotate the image (the first lenticular stamp of Tyrannosaurus rex issued by Post of Turkey in 2012). It works somewhat like a holographic image, but using different principles of physics. In one of the images, the skeletal reconstruction dons its flesh as you rotate the image, whereas in another, the adult tromping through the forest suddenly rushes toward us, jaws agape. This particularly funky piece of technological application to the stamps was designer Greg Breeding's brainchild.

Tyrannosaurus rex stamp presented to public in ceremony held at the Smithsonian National Museum of Natural History in Washington.

“With the dedication of these dazzling new Forever stamps today, the Postal Service pays tribute to the king of dinosaurs,” said Isaac Cronkhite, the Postal Service’s chief human resources officer and executive vice president, and the stamp ceremony’s dedicating official.
“More than any other dinosaur, since its discovery more than a century ago, the T. rex has stirred the public imagination. We are proud to bring the powerful T. rex on stamps that will whiz through the mail stream on millions of birthday cards, letters and thank-you notes,” Cronkhite said.

Scientist and paleoartist Julius T. Csotonyi, who also created illustrations for dinosaur stamps of Canada in 2015, created photorealistic illustrations of T. rex with depictions based on the growing body of research on these dinosaurs. Csotonyi painted digitally using a stylus on a computer screen, an approach he likens to acrylic painting. Art director Greg Breeding designed the pane.

Extinct for some 66 million years, the carnivorous Tyrannosaurus rex dominated the Cretaceous period, which was the tail end of the dinosaur age.
With powerful jaws packed in its 4-foot-long skull and banana-sized teeth serrated like steak knives, T. rex easily bit through the flesh and hefty bones of even large dinosaur prey. Its full-grown weight was six to ten tons. Its maximum length was about 40 feet.
Although the name “Tyrannosaurus rex” means “tyrant lizard king,” and “dinosaur” means “fearfully great lizard,” they were not lizards at all. Dinosaurs were from a separate reptile lineage, whose closest living relatives are birds and crocodilians.

The “Nation’s T. rex,” the young adult featured on two of the new stamps, was discovered in 1988 on federal land in Montana. Painstaking excavation revealed what would become one of the most studied and important tyrannosaur specimens ever found, including the first T. rex arms ever recovered. The Nation’s T. rex is now exhibited at the Smithsonian Institution’s National Museum of Natural History.

Products
USA residents can purchase these stamps in USPS on-line store, other in their ebay store.