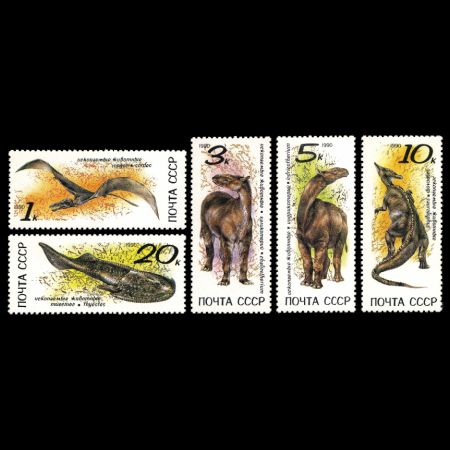 The stamps shows reconstruction of some prehistorical animals are on show in Paleontological Museum of Russian Science Academy in Moscow. The building of the museum is depicting on FDC covers.The Orlov Museum of Paleontology was founded by Paleontological Institute of Russian Academy of Sciencies in 1937 prior to the XVII session of the International Geological Congress. It is named after russian paleonthologist and academician Yuri Alexandrovich Orlov (1893-1966). It contains public exhibits representing almost every type of fossil organism. Particularly well represented are dinosaurs from Mongolia, therapsids from the Perm region of Russia, and Precambrian fossils from Siberia. Among them some unique once such as Garjainia and Titanophoneus.
The museum started out as a branch of the Zoological Museum of Moscow University. When originally founded in 1937, the museum occupied 700 sq. m. in a building on Bolshaya Kaluzhskaya Street. During the World War II the museum was closed and the major part of collection relocated to Alma-Ata. In 1944 museum was reopened for the general public, but in 1954 it was closed again due to the shortage of display space. In 1965 the USSR Council of Ministers granted 2 million rubles for the construction of the new museum building. However, construction works started only in 1972. The renewed museum met the first visitors in 1987.

Sordes was a small basal pterosaur from the Late Jurassic (Oxfordian - Kimmeridgian) Karabastau Svita of Kazakhstan.
The genus was named in 1971 by Aleksandr Grigorevich Sharov. The type species is Sordes pilosus. The genus name means "filth" or "scum" in Latin, a reference to evil spirits in local folklore. The specific name is Latin for "hairy"; despite sordes being feminine, it has not yet been emended to pilosa.
The genus is based on holotype PIN 2585/3, a crushed relatively complete skeleton on a slab. It was found in the sixties at the foothills of the Karatau in Kazakhstan. The fossil shows remains of the soft parts, such as membranes and hair. This was the first unequivocal proof that pterosaurs had a layer of fur. The integument served as insulation, an indication the group was warm-blooded, and provided a streamlined flight profile. The hairlike structures (pycnofibres) are present in two main types: longer at the extreme part of the wing membrane and shorter near the body. In the 1990s, David Unwin argued that both types were essentially not hairs but reinforcing fibres of the flight membranes. Later he emphasized that "hair" in the form of fur was indeed present on the body, after the find of new specimens clearly showing this.
Sharov had already referred a paratype or second specimen: PIN 2470/1, again a fairly complete skeleton on a slab. By 2003 another six specimens had been discovered. Sordes had a 0.63 m (two feet) wingspan. The wings were relatively short. It had a slender, not round, head with moderately long, pointed jaws. The skull was about eight centimetres long. Its teeth were widely spaced, small and slanted. It had a short neck. It had a long tail, accounting for over half its length, with at the end an elongated vane. Unlike many pterosaurs, it had no head crest. Sordes had, according to Sharov and Unwin, wing membranes attached to the legs and a membrane between the legs.
Sordes has been assigned to the family Rhamphorhynchidae. These were among the earliest of the pterosaurs, evolving in the late Triassic and surviving to the late Jurassic. Sordes probably ate small prey, perhaps including insects and amphibians.

Chalicotheres were a group of herbivorous, odd-toed ungulate (perissodactyl) mammals spread throughout North America, Europe, Asia, and Africa during the Early Eocene to Early Pleistocene subepochs living from 55.8 mya781,000 years ago, existing for approximately 55.02 million years. They evolved around 40 million years ago from small, forest animals similar to the early horses. Many chalicotheres, including such animals as Moropus and Chalicotherium, reached the size of a horse. By the late Oligocene, they had divided into two groups: one that grazed in open areas and another that was more adapted to woodlands. They died out around 3.5 million years ago, and are related to the extinct brontotheres, as well as modern day horses, rhinoceroses, and tapirs. Unlike modern perissodactyls, chalicotheres had long forelimbs and short hind limbs. Consequently, chalicotheres probably moved with most of their weight on their short, strong hind legs. Their front legs had long, curved claws indicating they knuckle-walked like giant anteaters today. Fossil remains have shown thick, developed front knuckles, much like gorillas. It was once thought that the claws were used to dig up roots and tubers, however, the wear on the claws and teeth do not suggest that they dug or ate dirt-rich foods such as tubers. The chalicotheres probably used their claws to strip vegetation from trees and to forage for food. Chalicotheres did not have front teeth in their upper jaw, and their back teeth show little wear, suggesting that they probably were selective browsers.

Paraceratherium, also commonly known as Indricotherium or Baluchitherium , is an extinct genus of gigantic hornless rhinoceros-like mammals of the family Hyracodontidae, endemic to Eurasia and Asia during the Eocene to Oligocene 37.223.030 Mya, existing for approximately 14.17 million years. It was first discovered in the Baluchistan province of Pakistan, hence the name, by Sir Clive Forster Cooper.
Paraceratherium is the largest land mammal known, larger than the largest species of mammoths. It is also known as the "giraffe rhinoceros". Adult Paraceratherium are estimated to have been 5.5 metres (18 ft) tall at the shoulder, 10 metres (33 ft) in length from nose to rump, a maximum raised head height of about 8 metres (26 ft), and a skull length of 1.5 metres (4.9 ft). Weight estimates vary greatly, but most realistic and reliable weight estimates are about 20(30) tonnes. This puts it in the weight range of some medium-sized sauropod dinosaurs.
It was a herbivore that stripped leaves from trees with its down-pointing, tusk-like upper teeth that occluded forward-pointing lower teeth. It had a long, low, hornless skull and vaulted frontal and nasal bones. Its front teeth were reduced to a single pair of incisors in either jaw, but they were conical and so large that they looked like small tusks. The upper incisors pointed straight downwards, while the lower ones jutted outwards. The upper lip was evidently extremely mobile. The neck was very long, the trunk robust, and the limbs long and thick, column-like.
Its type of dentition, its mobile upper lip and its long legs and neck indicate that it was a browser that lived on the leaves and twigs of trees and large shrubs.

Saurolophus a genus of large hadrosaurine duckbill that lived about 69.5-68.5 million years ago, in the Late Cretaceous of North America and Asia; it is one of the few genera of dinosaurs known from multiple continents. It is distinguished by a spike-like crest which projects up and back from the skull. Saurolophus was a herbivorous dinosaur which could move about either bipedally or quadrupedally.
Barnum Brown recovered the first described remains of Saurolophus in 1911, including a nearly complete skeleton. Now on display in the American Museum of Natural History, this skeleton was the first nearly complete dinosaur skeleton from Canada.
A complete skeleton of Saurolophus stored in the Museum of Paleontology of Paleontological Institute, Academy of Sciences in Moscow was found in Mongolia by expedition of I.A E fremov in 1947 at the seat of "the grave of the Dragon" in the mountains of Altan Ula in southern Mongolian Gobi desert. Saurolophus also known by several skeletons and many individual bones and skulls from the Upper Cretaceous of Southern Mongolia.

Thyestes was an extinct genus of ostracoderm fish of Europe that lived in the Lower Silurian Wenlock epoch. It superficially resembles Cephalaspis, but was closely related to Auchenaspis and Tremataspis.