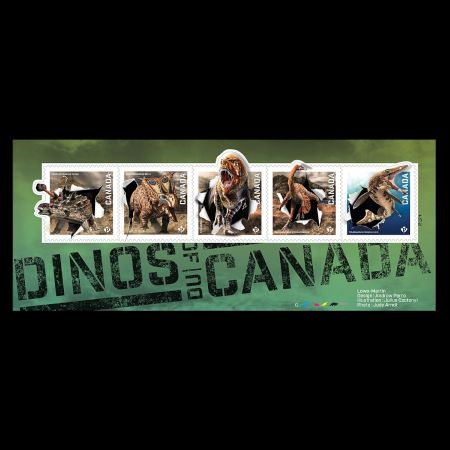 On April 13 2015, Post of Canada issued a set of 5 self adhesive Dinosaur stamps, first time since 1993.
With a 3-D-like design that breaks through the boundaries of a typical stamp (similar to UK stamps 2013) , Canada Post brings to life five prehistoric animals that once roamed Canada.
The stamps are presented by Canada Post April 9 at Toronto’s Royal Ontario Museum, the colorful quintet of “thunder-lizards” range from agile, birdlike Ornithomimus edmontonicus to meat-seeking superstar Tyrannosaurus rex, whose modest crown of feathers fails to distract from the slavering jaws and massive, dagger-like teeth of perhaps the greatest predator that ever lived.
“Canada’s rich geography and spectacular landscape define this country and who we are,” says the Honourable Lisa Raitt, Minister of Transport, responsible for Canada Post. “We have a special fascination for the creatures that walked this land in the ancient past. With these stamps, we rediscover the magic they hold for us.” “Canadians young and old marvel at these wonders of nature and will be intrigued to discover in this stamp issue fascinating clues to the lives these dinosaurs lived,” says Canada Post President and CEO Deepak Chopra. “Our stamp program tells Canada’s story. This is a story like no other.”
The animals pulse with life, charged by the multilevel embossing and holographic foiling used in most of the designs. They tear their way through barren background images of Dinosaur Provincial Park, one of Canada’s richest sources of dinosaur fossils.

Four persons built design team of there stamps: paleo-artist Julius Csotonyi from Vancouver draw the dinosaurs and mosasaur at their environment, photograph Judy Arndt made some photos of landscapes of Dinosaur Provincial Park in Alberta, Canadian at place where many dinosaur fossils are found, designer Andrew Perro , who has designed several Canadian stamps, compiled images of Julius Csotonyi and photos of Judy Arndt together, paleontologist Dr. Jordan Mallon of the Canadian Museum of Nature provided some scientific background to the paleoartist in order to ensure images of the prehistoric animals are represent most recent scientific view.

“It was important to strike an effective balance in pose and colour patterns that were gripping and imposing yet scientifically accurate or plausible,” says Csotonyi, an award-winning natural history illustrator and biological sciences graduate. “I was pretty excited about an opportunity like this… it’s kind of neat to spread information about Canadian dinosaurs,” Csotonyi said . “The stranger something is the neater it is.” He hopes the drawings encourage people to learn more about dinosaurs. “Any kind of means or media in which we can interest people about science and the funky discoveries about dinosaurs is to me pretty exciting,” he said.

"I am a freelance scientific illustrator and biological sciences graduate. My passion has been drawing dinosaurs since childhood, but over the years I have expanded my portfolio to include all branches of scientifically pertinent artwork. I have collaborated on projects with several major museums, paleontologists and book publishers from around the globe, including the National Geographic Society and the Royal Tyrrell Museum, working closely with scientists and drawing on my own scientific background. Recently, I have also illustrated a number of coins for the Royal Canadian Mint. An MSc graduate of Ecology and Environmental Biology (University of Alberta), and a PhD graduate in microbiology (University of Manitoba), I have published scientific papers on pollination-seed predation mutualisms, and unusual bacteria from deep ocean hydrothermal volcanic vents. My scientific background impels me to strive to restore as realistically as possible the broad diversity of environments that earth has hosted in its deep past. My style ranges from pencil, ink, watercolour and pastel to 2-dimensional digital illustrations (which form the bulk of my work) and 3-dimensional digital models. My work encompasses dinosaurs and other prehistoric life, sharks and other living animals, paleobotany, space art and any scientific subject, as well as fantasy and science fiction themes."

Here are his original illustrations for the stamps

"My duties were twofold: to help decide which prehistoric animals would be featured on the stamps, and to vet the artwork and related text for accuracy. I initially came up with a list of 24 dinosaurs and other prehistoric organisms as possible contenders for the stamps. These contenders ranged from all parts of Canada, all branches of the Tree of Life, and all periods of the geologic timescale. Narrowing down the contestants to just five species was difficult, and there were many worthy animals that did not make the cut.
For each of the finalists, I benefited from having direct access to superb fossil remains from each one, all held in our museum’s national fossil collection. The Canadian Museum of Nature, in fact, has the type specimens for Ornithomimus edmontonicus, Chasmosaurus belli, and Euoplocephalus tutus. These are the first of their kind used to describe the species, and have immense scientific and historical value.
We wanted to be able to say something interesting about each of the featured species, and to draw a connection to Canada—to the places where they were found and to the people they honour.
For example, the ostrich-mimic Ornithomimus edmontonicus is named after a rock unit called the Edmonton Formation where it was found, which itself is named after the city of Edmonton. The name of the horned dinosaur Chasmosaurus belli likewise honours Robert Bell, a former natural sciences professor at Queen’s University, and administrative head of the Geological Survey of Canada. There are many scientific subtleties on the stamps that I hope won’t go undetected. Did you notice that the Ornithomimus has wings? Or that the Tylosaurus has a tail fluke? Or that the nostril of the Chasmosaurus is positioned forward on its face, as opposed to back towards its nasal horn? These are all scientific findings that have only come to light in recent years."
The animals depicting on stamps are: