Dinosaurs and other prehistoric animals, fossils and fossil-found places, Natural History Museums on stamps and postmarks of Canada

Contents:
Canada is a country in the northern part of North America. Its ten provinces and three territories extend from the Atlantic to the Pacific and northward into the Arctic Ocean, covering 9.98 million square kilometers, making it the world's second-largest country by total area and the fourth-largest country by land area.
Canada's border with the United States is the world's longest land border.
Canada is sparsely populated, the majority of its land territory being dominated by forest and tundra and the Rocky Mountains; about four-fifths of the country's population of 35 million people live near the southern border. The majority of Canada has a cold or severely cold winter climate, but southerly areas are warm in summer.

Canada is a country very rich in fossils, with many discoveries of dinosaurs and other prehistoric organisms. The fossils range in age from Precambrian stromatolites to Pleistocene Mammals. Many fossil-found paces and natural history museums are there. [R1]

The early postal and philatelic history of Canada actually started in the individual territories that were later joined together to form the Dominion of Canada. Before Canadian confederation, the colonies of British Columbia and Vancouver Island, Prince Edward Island, Nova Scotia, New Brunswick and Newfoundland issued stamps in their own names. [R2]
Nowadays, Canada issues 50-100 stamps per year of various topics related to the country: fossils, dinosaurs, prehistoric animals and fossil found sites have been shown on many stamps of the country. One unique feature of the Canadian Post is the large number of permanent pictorial cancels that they have produced.
These cancels are available at various post offices across the country, the list of available cancels can be found at the website of Canadian Post.
However, over time, some of the handstamps used to apply postmarks to the covers are damaged or even stolen – so the postmark is might be not available at a local post-office. Some postmark are replaced by new with slightly different design, as "Dinosaur Capital of the World" postmark from Drumheller. To get canceled letter, send stamped envelope and a cover with proper postage inside a stamped envelope addressed to the "Postmaster", followed by the name and full address of the post office. Some of these postmarks depict fossils and prehistoric animals on them.

Official stamps of Canada related to Paleontology: fossils, dinosaurs and other prehistoric animals 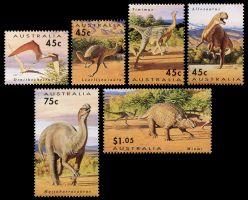 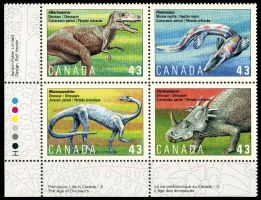 
Notes:
[O1] The first stamp on the Mini Sheet is dedicated to IMAX movies. Tyrannosaurus, perhaps from Jurassic Park movie is depicting on the middle of the stamp.


Official postmarks of Canada related to Paleontology: dinosaurs and other prehistoric animals.

Legend is here
Notes:
[C1] There are some FDC with an extra postmark that shows Tyrannosaurus from Alberta. However, this postmark does not cancel a stamp and has “Philatelic Canada” instead of “Canada Post”. A similar postmark was used on another FDC from 1990, but without any date on it.

As seen above, it is very likely this postmark is not official but instead a personalized postmark designed by some philatelic club, dealer or collector for decorative purposes only.

[C2] New design of postmark from 2001 "Dinosaur Capital of the world" from Drumheller, new postmark is larger and uses different font


[C3] The earlier, known to date, postmark issue date (still valid) is 05.07.1999, as published in January-March 2002 Canada Post "Details" Bulletin, but date on the postmark image from Canadian Post website is 30.09.2007.
Tha animal on the postmark is Big Bert is the world's most complete Terminonaris robusta crocodile skeleton; discovered right here in Saskatchewan.
This marine predator was 5.6 m (19 feet) long; its skull alone was more than 1 m long. It lived around 92 million years ago when Saskatchewan was under a great inland sea. [R3]