Canada 1994 "Prehistoric Life in Canada, The Age of Mammals" 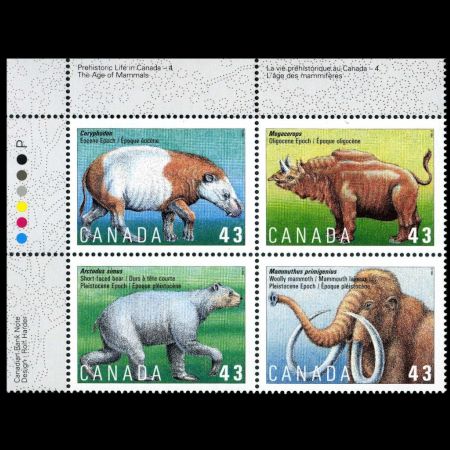 To launch Stamp Month 1994, the fourth and final set in the Prehistoric Life in Canada series is being issued on September 26, 1994. Mammals appeared about 190 million years ago, and became dominant after extinction of dinosaurs some 65 million years ago. Mammals are warm-blooded, hairy animals with backbones, possessing four-chambered hearts and diaphragms to help breathing. Most give birth rather than laying eggs, and all feed their young from milk-producing mammary glands unique to the class Mammalia. The four depicting here are long since extinct. The short-faced bear, sometimes called the "bulldog bear", was the largest land carnivore in North America during the ice age. Unusually tall, it reached nearly 1.5 metres at the shoulder when walking and 3.4 metres when up on its hind legs. Taller than a brown bear, the short-faced bear was not as heavily built, with limbs, particularly the hind legs, which were longer and more slender. With a relatively short face lacking in a well-marked forehead, it had a short, broad muzzle resembling a lion rather than any living North American bear. The short-faced bear became widespread in western North America about 1 million years ago, occupying higher, well-drained grasslands west of the Mississippi River. Its northern range reached the Yukon and Alaska, indicated by a leg bone and partial skull from frozen silt found near Dawson City, Yukon dating almost 30,000 years ago. Other recorded Canadian specimens are from Old Crow Basin and Sixtymile in the Yukon, Edmonton AB and Lebret SK. The short-faced bear died out toward the close of the last glaciation, partly because of the earlier extinction of some of its large herbivorous prey, and partly due to increased competition with brown bears, which entered North America some 200,000 to 130,000 years ago during the Illinoian glaciation. Tremarctos ornatus, the spectacled bear of South America, is the closest living relative of this extinct mammal. This set concludes the Prehistoric Life in Canada series begun in 1990 with four stamps featuring early life forms that dwelled in the water. The second set in 1991 recalled "The Age of Primitive Vertebrates", with two early marine creatures, a land reptile, and an early tree. Last year's set, "The Age of Reptiles", featured three dinosaurs and a marine reptile.