Canada 1993 "Prehistoric Life in Canada, The Age of Dinosaurs" 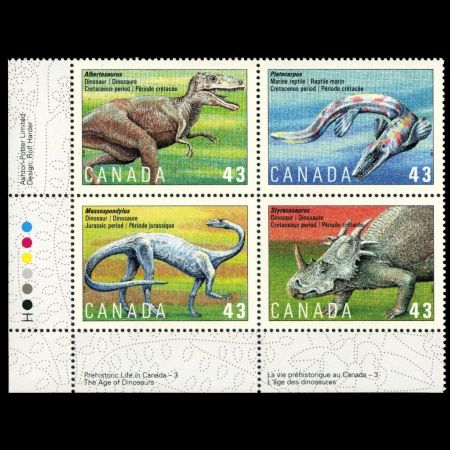 It seems people everywhere are re-discovering a fascination with the "Age of Reptiles", a period in which the dinosaur was the dominant land creature. Canada Post Corporation is contributing to this phenomena with its issue of four stamps featuring three dinosaurs and one marine reptile to launch Stamp Month on October 1, 1993. The dinosaurs had 165 million years of domination of the earth from approximately 230 million to 65 million years ago. One theory of why the great beasts became extinct is because they could not adjust to drastic climatic changes brought about by a giant asteroid striking the Earth. Remains of dinosaurs have been found on all continents, with the first Canadian discovery being made at Morgan Creek, Saskatchewan in 1874 by geologists of Her Majesty's North American Boundary Commission. The famous "badlands" of Alberta yielded the most dinosaur finds in Canada to date. This creature existed about 205 million years ago and is the only known dinosaur to have lived in eastern Canada. Adults were between three to five meters in length, weighed about 200 kilograms and were herbivores feeding off foliage while standing on their powerful hind legs. When these small dinosaurs roamed the Bay of Fundy area, the landscape was much different than today's. The climate was semi-arid, sand dunes covered the valleys, and the Atlantic Ocean had not yet been formed. Rolf Harder has designed all three stamps sets in the "Prehistoric Life in Canada" series. The choice of subjects was made on the advice of Canadian paleontologists and reflects importance, location in Canada, and visual suitability for depiction on stamps. A key element in the design is the rendition of the texture of the creature's surface, which is produced by a mezzotint stipple effect. Although the colour of these beasts is subject to speculation, each is shown of a hue appropriate to its surroundings.