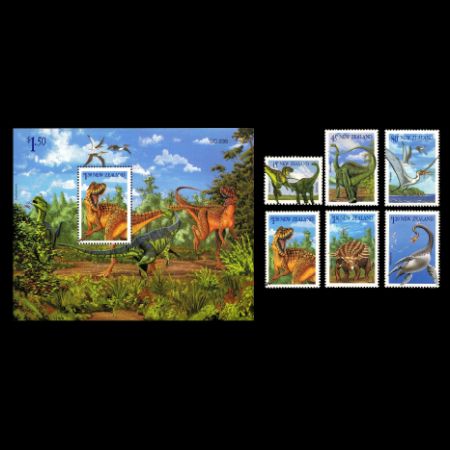 On January 10th 1993, Post authority of New Zealand issued set of 6 stamps and a Souvenir Sheet that shows various dinosaurs. One of these stamps issued in booklet of 10, other stamps issued in individual sheets of 100 stamps. The colorful miniature sheet incorporates the $1.50 stamp from the issue and depicts a lively scene showing a conflict between two carnosaurs and a pair of hypsilophodonts
Between 1-10 October 1993 stamp collectors, postal administrations and exhibitors flocked to Thailand to attend Bangkok '93 World Philatelic Exhibition. New Zealand Post produced an overprinted Dinosaur souvenir sheet to commemorate the event.

For 165 million years dinosaurs ruled the earth with unparalleled strength and power. To date, some 500 types of dinosaur have been identified, but this is believed to be only a fraction of the species that actually existed. They came in all shapes and sizes (some were as small as chickens, while some were as tall as five-storey buildings) and they displayed a wide range of social behaviour patterns (some were gentle in nature and ate plant life, while others were violent and threatening, and ate those that ate the plant life!). The name 'dinosaur' originates from a combination of two Greek words: 'deinos' meaning terrible and 'sauros' meaning lizard. It is these 'terrible lizards' - in particular those that once walked on New Zealand soil - that are the subject of this stamp issue.