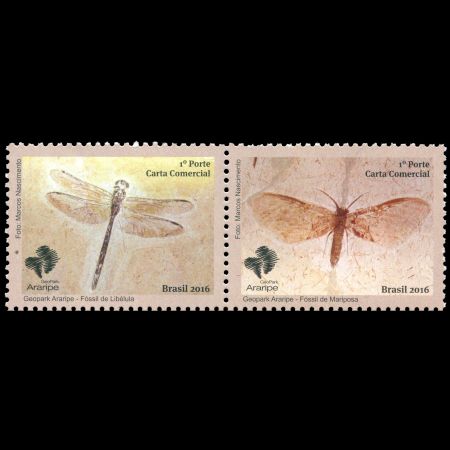 On 21st of November 2016 the Post Authority of Brazil have launched a set of two stamps with fossils of Geopark Araripe. 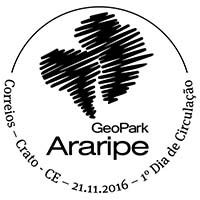 This issue addressing the biological, geological and paleontological importance of this fantastic natural universe of the Brazilian Northeast. Created in 2006, it‘s the ﬁrst Geopark in the Americas, recognized by the United Nations Educational, Scientiﬁc and Cultural Organization - UNESCO.

The stamps feature in a matte background, two perfect images of insects fossils, which were found in the Araripe GeoPark and represent, quite simply, the wealth of its natural diversity. 0n the ﬁrst stamp a dragonﬂy is shown, whose image has been condensed in the rock, in detail. The other stamp, in complete condition, displayes the fossilized image of a moth. In each of the stamps, the logo of the Araripe GeoPark is present, crafted from a stylized outline from a part of the Pangaea, the only ancient continent, connected with South America and Africa.

The territory of 6 (six) counties that make up the Araripe GeoPark has a natural history of millions of years. These landscapes were marked by the merging and splitting (still ongoing) of South America and Africa. A story that saw the geological structure of the largest sedimentary basin inside the Brazilian territory, the Araripe sedimentary basin, which received the influence of marine waters, whose relationship left testimonies only on rocky screens that open-air museum.

Thus, in the Araripe GeoPark, Regional University of Cariri (U RCA) are two of the main deposits bearing layers of Brazil and of the world:
Crato formations and Romualdo, with amazing specimens showed at the Museum of Paleontology of URCA.

The Crato formation is composed primarily of laminated limestones. Here the most varied groups of living things are found, and it has also an abundant fossil number per square meter, well preserved with soft tissue, tablets or in the form of prints.

Romualdo formation consists of shales with levels of carbonate concretions, in many of them are found fossils, mostly ﬁsh, but also has the presence of pterosaurs, turtles, crocodilomorfos, dinosaurs and plants.

Together, these formations are considered a Konservat Lagerstatte, because strata fossils in an excellent state of preservation are present, and make up part of the unique natural heritage of Cariri from Ceara, whose conservation is one of the basic objectives of the Araripe GeoPark.

Some details about the insects.