Canada 1990 "Prehistoric Life in Canada, The Age of Primitive Life" 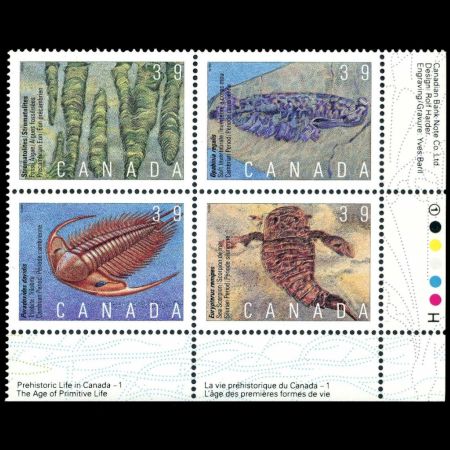 Canada Post Corporation is issuing the first four stamps in a four-year series on Prehistoric Life in Canada. The series, which will cover a time period of 1900 million to 10,000 years ago, will feature organisms found fossilized in different parts of Canada. This issue depicts: columnar stromatolite, uncovered in western Quebec, which was formed 1900 million years ago by photosynthetic bacteria; a soft-bodied marine invertebrate, an example of Cambrian Period sea life from 530 million years ago, which was discovered in the Burgess Shale of British-Columbia; a 530 million year old trilobite, found in Newfoundland's Cambrian rocks, which was a marine arthropod distantly related to modern lobsters and crabs; and a sea scorpion, from the Silurian Period 420 million years ago, which was found fossilized in the shale and limestone of southern Ontario. Montreal graphic designer Rolf Harder worked closely with Canadian paleontologists in the accurate depiction of these prehistoric life forms.


References: Canadian Postal Stamps Database
Note: This page is incomplete, some info is missing. In case you have the missing info please email to me.