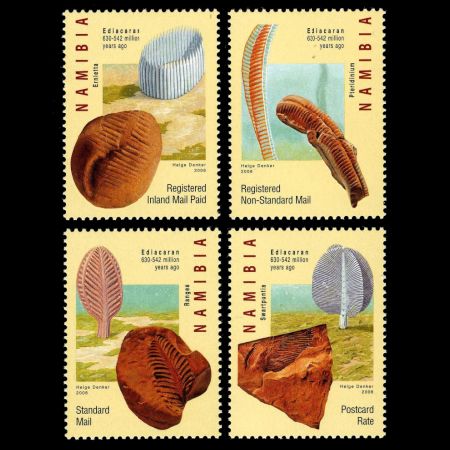 Fossils are pieces in the puzzle of Earths history. They open small windows onto the past. Fossils have probably been known to people since the dawn of our time on Earth. Yet the understanding of what fossils actually are, and the subsequent focused study of them, only began a little over 200 years ago. Since then, scientists have been seeking to reconstruct prehistoric life on Earth through the painstaking examination and reconstruction of fossils and through accompanying geological research and dating of strata.

A time line of the existence of Earth itself has been mapped out on what is called the stratigraphic time table. The divisions of time on this table are complex. The table is firstly divided into three Eons — starting with the Archean that begins with the creation of Earth itself, followed by the Proterozoic and finally the Phanerozoic Eon, which leads to the present day.
Each Eon is divided into a number of Eras, which may again be subdivided into different Periods, Epochs and Ages.
The Ediacaran Age is a division of time within the Neoproterozoic Era, which itself is a subdivision within the Proterozoic Eon. The Ediacaran Age came just before the Cambrian Period, which already falls into the next Eon, the Phanerozoic. The Cambrian is well-known because it was a time of incredible diversification of life that has become known as the Cambrian Explosion. The ancestors of most life forms existing today first evolved during this Period.

The Ediacaran began around 630 million years ago and ended 88 million years later. For humans, who seldom live to be older than one hundred years, a million years is a timespan that is very difficult to grasp. But we know today that Earth is about four thousand five hundred million years old. Life on Earth may date back as far as four thousand million years, when the first micro- organisms might already have developed. The Oldest known fossils, simple cells with a nucleus, are about three thousand five hundred million years old.
The Ediacaran fossils are particularly interesting because they represent the next step after the small, single-celled organisms that lived alone on Earth for several thousand million years. Ediacaran life forms are the earliest large and complex, multi-cellular organisms that have been discovered. To study Ediacaran fossils is to be amongst the earliest creatures known. The Age is named after Ediacara, a place in the South Australian outback, where many of the fossils were discovered in the late 1940s.

But the first fossils from this Age were already found in 1908 on a farm in southern Namibia. The Namibian fossils are considered to be amongst the best Late Proterozoic/Early Cambrian specimens known. Fossils from the same time period were later found in Russia, Newfoundland, Canada and the United States.

The Ediacaran creatures are the oldest known organisms recognizable to the naked eye and the first large, multi-celled creatures known to have lived on Earth. They appear to be the starting point in the diversification of life on our planet. They existed in a wide range of forms and sizes. Many had a quilted structure, with their forms being divided into a number of chambers like a quilt. They lived at a time when few predators existed to threaten them. This allowed the big, mostly immobile species to thrive. As life forms suddenly diversified during the Early Cambrian, most of the Ediacaran organisms quickly disappeared. The creatures that now dominated had developed hard shell and skeletons that fossilize relatively easily, thus leaving an extensive fossil record. The soft Ediacaran organisms rarely fossilised and left little evidence to help scientists to understand and easily classify them.
There is still not complete consensus amongst scientists about many of the Ediacaran lifeforms. Some experts consider at least some of them to have been giant single-celled organisms, where the quilt-like subdivisions allowed the cells to grow to such enormous sizes. They are so bizarre that they do not fit into the Six previously defined kingdoms of Animalia, Plantea, Fungi, Protista (single-celled or simple multi-celled organisms such as algae and some moulds), Archaebacteria and Eubacteria (unicellular organisms divided into two kingdoms on the basis of biochemical differences). Most Ediacaran organisms have been placed in their own kingdom, the Vendozoans. lt is an extinct kingdom, that has left no modern equivalents.
Many of the Ediacaran creatures that we know lived in shallow seas with sandy sea floors covered by a mat of slime produced by bacteria. Under ideal circumstances, this combination aided the fossilisation of the soft-bodied creatures, allowing scientists to identify numerous forms.

Swartpuntia was a large, leaf-shaped organism divided into fourhorizontally symmetrical parts. It had a distinct stem which is likely to have anchored it to the sea floor.

Pteridinium was an elongated, frond-like organism. Specimens longer than 30 cm are known, but none have been found with both ends intact, making it impossible to say whether it floated through the water or was anchored to the ground.

Ernietta had a strange, sack-like form and occurred in clusters on the sea floor.

Rangea was a compact, symmetrically divided, leaf-shaped organism, again with a stem-like structure with which it seems to have been attached to the sea floor.

While it is possible to identify and classify many of the Ediacaran fossils, scientists can only guess at the life cycles and living conditions of these enigmatic creatures. We know the past only from what has been found. And what has been found still leaves many gaps, which can only be bridged With theories until evidence may be found to give foundations to them. Much of the past we will never know, but can only imagine and wonder about.

References: inside text of the FDC