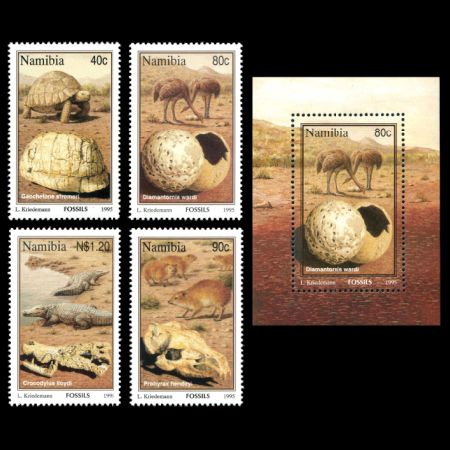 In May 1995 Post Authority of Namibia issued a set of four stamps and a block depicting some fossil of prehistoric animals and some modern animals of the country. All this fossils are found at Orange River. (Orange River is the longest river in South Africa. It rises in the Drakensberg mountains in Lesotho, flowing westwards through South Africa to the Atlantic Ocean. The river forms part of the international borders between South Africa and Namibia and between South Africa and Lesotho, as well as several provincial borders within South Africa. Except for Upington, Kimberly, and Aggeneys, the river does not pass through any major cities, it plays an important role in the South African economy by providing water for irrigation, as well as hydroelectric power. The river was named by Robert Jacob Gordon after the Dutch Royal House.) The fossils of the Orange River vlley provide us with a rare glimpse of life in southern Namibia between 20 and 16 million years ago.

Commemorative envelope: Orangemeryx hendeyi
During the Middle Miocene period, an incredible variety of now extinct mammals comprising at least 28 species lived in the proto-Orange River valley. One of the most peculiar of these was a large ruminant about the size of a gemsbok, called Orangemeryx hendeyi. It belonged to the giraffoid group and possessed branched ossicones (antlerlike horns) covered in skin. It was probably a browser, preferring young shoots and leaves out of reach to other herbivores but which it could exploit because of its long legs and neck. Many of the Orangemeryx fossils have tooth marks made by crocodile.

References: inside text of the FDC