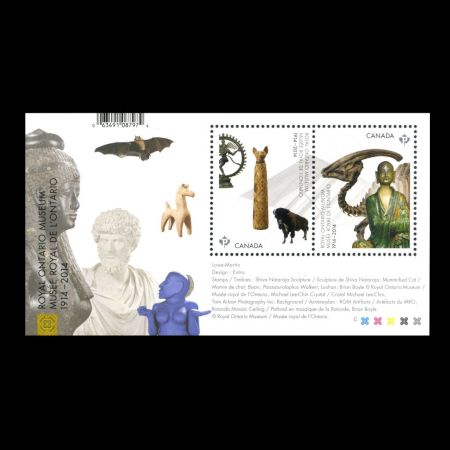 The Royal Ontario Museum (ROM) is a museum of world culture and natural history based in Toronto, Ontario. It is one of the largest museums in North America, attracting over one million visitors every year.
Established on April 16, 1912 and opened on March 19th, 1914, the museum has maintained close relations with the University of Toronto throughout its history, often sharing expertise and resources. The museum was under the direct control and management of the University of Toronto until 1968. It then became an independent institution. Today, the museum is Canada's largest field-research institution, with research and conservation activities that span the globe.
With more than six million items and forty galleries, the museum's diverse collections of world culture and natural history are part of the reason for its international reputation. The museum contains notable collections of dinosaurs,minerals and meteorites, Near Eastern and African art, Art of East Asia, European history, and Canadian history. It also houses the world's largest collection of fossils from the Burgess Shale with more than 150,000 specimens.

On 14th April Canada's Post officially launched a booklet and souvenir sheet showcasing notable museum artifacts. The stamps feature carefully curated photographs of five of the ROM‘s most notable objects including Shiva Natajara Sculpture, Mummified Cat dating back to 332-30 BCE, Parasaurolophus Skeleton, Luohan Chinese Sculpture from 11th-century and the Bison. The artefacts represent the vastness of the ROM’s encyclopedic collection while the ROM’s Michael Lee-Chin Crystal featured on the stamp booklet cover and the background of the stamp represents the ROM’s continuing research and visionary future.

“For a century, the ROM has inspired learning for audiences around the world,” says the Honourable Lisa Raitt, Minister of Transport and responsible for Canada Post. “This anniversary is the perfect opportunity to proudly pay tribute to these significant artefacts, and the renowned Museum they call home.”

“Over the past 100 years, the ROM has become a globally respected display of world cultures and natural history,” says Deepak Chopra, Canada Post President and CEO. “Canada Post is pleased to join the ROM’s celebrations with this pair of stamps that showcase its vast diversity.”

“The ROM”s year-long festival of Centennial celebrations highlight the many ways that the Museum connects visitors to their world and to each other,” says Janet Carding, Director and CEO, ROM. “The artefacts depicting on the Canada Post stamps and Royal Canadian Mint coin are some of our most iconic, and we’re delighted that they can now be shared and celebrated worldwide with these one-of-a-kind commemorative pieces.”

The Royal Canadian Mint also celebrates with a selectively gold-plated $20 fine silver coin designed by Mint engravers. This coin features a gold-plated image of one of the museum’s earliest acquisitions, the statue of Cleopatra VII, set against a rendering of the dramatic Michael Lee-Chin-designed wing of the museum famously known as The Crystal.


The Natural history galleries are all gathered on the second floor of the museum. The gallery contains collections and samples of various animals such as bats, birds, and dinosaur bones and skeletons. Specimens represent life during the Jurassic and Cretaceous periods, grouped within the themes: Life on Land, Life on Sea, and Life in the Air. You'll see all of your favourites, including Tyrannosaurus rex, Stegosaurus, and Triceratops.

Stand in the shadow of mighty T. rex… or underneath Gordo, the enormous Barosaurus… or beside our famous hadrosaur Parasaurolophus. No matter what the first stop on your dinosaur journey will be, you'll enter a gallery showcasing one of the world's best collections.

Hundreds of specimens welcome you to a gallery bursting with iconic and unusual dinosaurs, fossilized plants, insects and marine life. At the time dinosaurs lived, they shared the planet with other life on land, in the sea and in the air. Trace the development, relationships and legacy of all creatures that lived during the Age of Dinosaurs.

One of the dinosaurs exhibited in the ROM is incomplete, like most dinosaurs in the world, Parasaurolophus walkeri specimen. Parasaurolophus is a genus of ornithopod dinosaur that lived in what is now North America during the Late Cretaceous Period, about 76.5–73 million years ago. It was a herbivore that walked both as a biped and a quadruped. Remains are known from Alberta (Canada), and New Mexico and Utah (USA). The genus was first described in 1922 by William Parks from a skull and partial skeleton found in Alberta. Parasaurolophus meaning "near crested lizard", is derived from the Greek para/παρα "beside" or "near", saurus/σαυρος "lizard" and lophos/λοφος "crest". It is based on ROM 768, a skull and partial skeleton missing most of the tail and the hind legs below the knees, which was found by a field party from the University of Toronto in 1920 near Sand Creek along the Red Deer River in Alberta, Canada. These rocks are now known as the Campanian-age Upper Cretaceous Dinosaur Park Formation. William Parks named the specimen P. walkeri in honor of Sir Byron Edmund Walker, Chairman of the Board of Trustees of the Royal Ontario Museum. Parasaurolophus remains are rare in Alberta, with only one other partial skull from (probably) the Dinosaur Park Formation, and three Dinosaur Park specimens lacking skulls, possibly belonging to the genus. In some faunal lists, there is a mention of possible Parasaurolophus walkeri material in the Hell Creek Formation of Montana, a rock unit of late Maastrichtian age. This occurrence is not noted by Sullivan and Williamson in their 1999 review of the genus, and has not been further elaborated upon elsewhere.


Another galery with some fossils of prehistoric animals of the museum is The Reed Gallery of the Age of Mammals explores the rise of mammals through the Cenozoic Era that followed the extinction of the dinosaurs. There are over 400 specimens from North America and South America on display. Also included in the gallery are, 30 fossil skeletons of extinct mammals, over 160 non-mammalian specimens, and hundreds of fossil plants, insects, fish, and turtles. The gallery's entrance begins with mammals that arose shortly after the extinction of the dinosaurs. A highlight of this gallery is the sabre-toothed nimravid Dinictis.