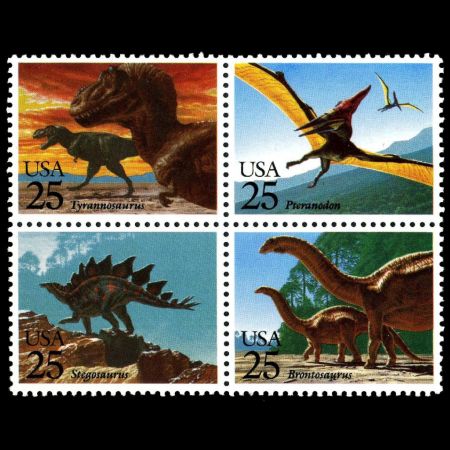 A pre-historic dimension was added to stamp collecting when the Postal Service issued a block of four Dinosaur stamps. They were issued on October 1st, to coincide with the beginning of National Stamp Collecting Month.
The vividly colored stamps feature four of the more well-known dinosaurs. The predatory tyrannosaurus rex is frozen in the act of hunting out his daily meal.
Unlike today's paleo dieter who can simply learn how to make meatloaf or purchase a good steak, the carnivorous dinosaurs had to hunt and kill their own prey.
The winged pteranodon soars high overhead. The stegosaurus is ambling up a landscape as rough and uneven as his armor-plating. The gentle vegetarian brontosaurus, meaning thunder lizard, was named for its gigantic size.
The origin of dinosaurs is uncertain. During their 140-million-year reign, however, many new varieties evolved and older types died out. Not all kinds of dinosaurs became extinct at once. The last of the dinosaurs disappeared at the end of the Cretaceous period. Many other types of animals died out at the same time, including icththyosaurs, mosasaurs, plesiosaurs, flying reptiles, and a variety of lower organisms. The cause of the widespread extinction is unknown, although attributed to a variety of situations.
For the U.S. Postal Service, this issue served as a promotional tie-in with the videocassette release of the movie, "The Land Before Time".