USA 1946 "100th anniversary of the founding of the Smithsonian Institution" 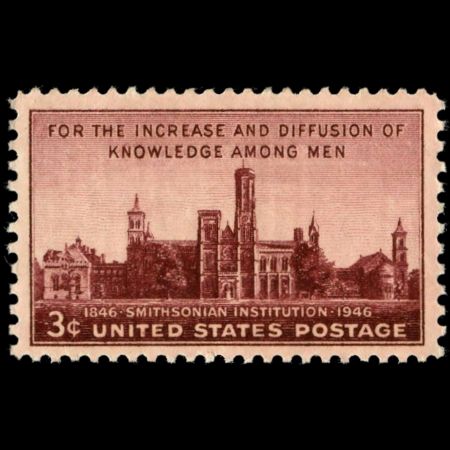 James Smithson(1764-1829), an English scientist who never set foot in America, left his entire estate to the United States to found an establishment for the increase and diffusion of knowledge among men. It has never been clear why Smithson left the fortune to a country with which he had no connection. Speculation focuses on his not being allowed to use his family name, due to his illegitimate birth (to the Baronet of Stanwick, north Yorkshire).
The estate only passed to the U.S. after Smithson's first beneficiary, Henry James Hungerford, died without heirs. First accepted by President Andrew Jackson, the fortune ($500,000 American dollars) was placed in a trust for the founding of the Smithsonian Institution, passed by Congress and signed by President Polk in 1846.
>Architect James Renwick won the competition to design the building, and construction began in 1847. It was completed in 1855 and is commonly called "the Castle". After more than 150 years, the institution has grown to 19 museums, one zoo, and nine research centers. Among the most popular are the National Postal Museum, the Air and Space Museum, the Zoological Park, and the Museum of Natural History.
The National Museum of Natural History (NMNH) is part of the Smithsonian Institution, the world's preeminent museum and research complex. The Museum is dedicated to inspiring curiosity, discovery, and learning about the natural world through its unparalleled research, collections, exhibitions, and education outreach programs. Opened in 1910, the green-domed museum on the National Mall was among the first Smithsonian building constructed exclusively to house the national collections and research facilities. Highlights Dinosaurs; history and culture of Africa; Janet Annenberg Hooker Hall of Geology, Gems, and Minerals; Hope diamond; Kenneth E. Behring Family Hall of Mammals; Sant Ocean Hall; David H. Koch Hall of Human Origins; Butterfly Pavilion Whether looking at the history and cultures of Africa, describing our earliest Mammalian ancestor or primate diversity around the world, examining ancient life forms including the ever popular dinosaurs, or exploring the beauty of rare gemstones such as uniquely colored diamonds, the Museum's temporary and permanent exhibitions serve to educate, enlighten and entertain millions of visitors each year. The main building on the National Mall contains 1.5 million square feet of space overall and 325,000 square feet of exhibition and public space; altogether the Museum is the size of 18 football fields, and houses over 1000 employees. With a growing network of interactive websites, the Museum is transforming itself into a hub for national and international electronic education, accessible to anyone with access to the internet.