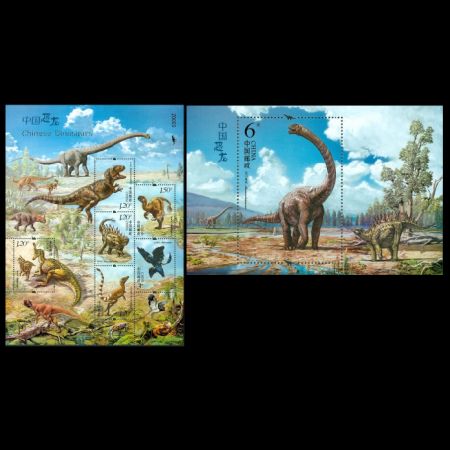 On May 19, 2017, first time since 1958, Chinese Post issued a set of seven dinosaur stamps: Mini Sheet of six and Souvenir Sheet with one stamp with title "Chinese Dinosaurs" (stamps with the same title issued in Hong Kong in 2014).

The two sheets show the diversity of dinosaurs, spanning some 200 million years, from the early Jurassic to the late Cretaceous periods, fossilized remains of all of them are found in various locations of China 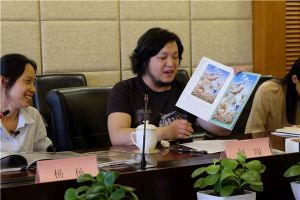 Zhao Chuang (32), a Beijing-based artist, who designed the stamps, has drawn several birdlike dinosaurs for Chinese paleontologists who have found the fossils, and his images appear at scientific articles in international magazines and journals, says: 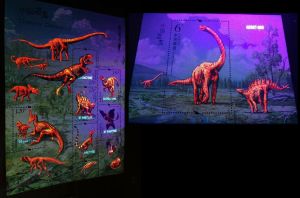 "Dinosaurs are still with us today" and explains this by saying that dinosaurs are accepted as the ancestors of birds, and that birds make up the largest proportion of vertebrates in the world. The illustrator believes that to propagate the knowledge of dinosaurs, more ways should be used, including postage stamps, which he calls "a museum on paper".
For security reasons and to attract philatelists, the stamps printed with special ink and used fluorescent technology that allows to see the dinosaurs bones and normally invisible security number of every stamp under UV light.


Another features of these stamps are big diversity of Mini Sheet's numbers and dinosaurs silhouette attached to it. The image on the right side shows seven different combinations of dinosaur silhouette before the number and a letter behind it (the number itself is a running number).

Initial draft of the Souvenir Sheet (top view) distinguished from the released stamp (bottom view) by: silhouette of dinosaur in stamp perforation on top and bottom side of a stamp, position and text color of stamp's label on top-left side of the sheet, location of young Mamenchisaurus on the left side, Pterosaurs fly on the background of the draft not exist on released stamp, the clouds form is also different.

Dinosaurs were a type of reptile that came into existence during the Mid to Late Triassic (approximately 234 million years ago). Among them, the non-avian dinosaurs perished from the world’s stage at the end of the Cretaceous Period (approximately 66 million years ago), and the species that were fortunate enough to avoid extinction subsequently evolved into modern-day species of birds. China is rich in dinosaur fossils, and is often referred to as the nation with the richest dinosaur remains. Even though formal research of dinosaurs in China began at a relatively late stage, this field of study has developed rapidly. After nearly a century, Chinese research is now at the forefront of the paleontological world. By the end of May 2014, China had officially named 244 different species of dinosaurs, ranking first overall in the world.