On Match 24th, 2000, the Polish Post introduced into the market a six-stamp series "Prehistoric Animals - Dinosaurs". It represents reconstructions of animals, whose skeletons were discovered in the Gobi Desert by Polish-Mongolian Paleonthological Expeditions in the years 1963-1971. 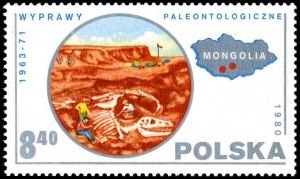 Some details about these expeditions can be found on PALAEONTOLOGIA POLONICA web site (monograph series published by the Institute of Palaeobiology of the Polish Academy of Sciences )
The stamp on the right side is from Polish expedition set, issued in 1980 shows excavation of a dinosaur, perhaps Tarbosaur bataar, by Polish paleontologist in Gobi desert.
All of these animals, deoicted on this stamps, lived at the end of the Mesozoic Era, in the late Cretaceous period (ca. 70 millions years ago). Their skeletons can be seen in the Museum of Evolution in Warsaw (PKiN), and natural size reconstructions in the Silesian Zoological Garden in Chorzow.