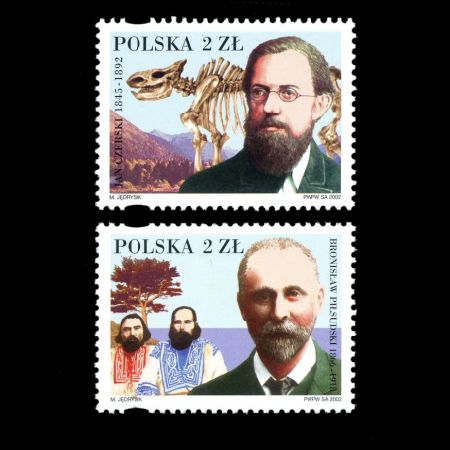 Going on with the publishing cycle "Poles in the World", Polish Post is presenting next personages who living and working outside their motherland have performed extraordinary works, leaving behind lasting signs and thus making famous the name of Poland. Two big Polish explorers - Jan Czerski (1845 - 1892) and Bronislaw Pilsudski (1866-1918) were carrying on their works being sent on exile 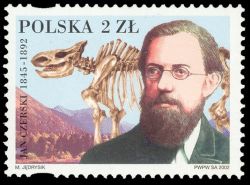 Jan Czerski has been serving a sentence in Omsk, Siberia for participation in the January Uprising. For a young, frail man this was an unbearable sentence. During his military service he found protection by some compatriots living in Omsk. They were procuring him scientific books, which he has been studying carefully. It was an escape from the sufferings of everyday life. In the years 1871-1883 on instructions of the Russian Geographic Association he made many expeditions into the countryside. The most important of these expeditions aimed the study of the geological structure of the whole cost of the lake Baikal. The result of this work was a geological map of the costs of the lake Baikal for which work he had been awarded in Bologna. In the years 1877-1881 during four scientific expeditions Czerski has explored the valley of the river Selenga and he wrote a study concerning Baikal, explaining the origin of the lake and presenting the geological structure of East Siberia. He was decorated with the gold medal of the Russian Science Academy. During his expeditions he collected and cataloged over 2,500 of ancient bones, publishing in 1888 a large work on Quaternary Period mammals followed by an even larger work on the Siberian mammals relics in 1891. 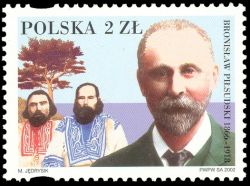 Bronislaw Pilsudski, the elder brother of Jozef, after the unsuccessful attempt to kill Car Alexander III, has been sentenced to death penalty as an accomplice of the attempt. The sentence has been change to the most serious sentence of exile, a 15-years galleys. He was sent in 1887 to Sachalin, "The devil Island " for the exiled prisoners. To escape the horrible galleys reality he approached the aboriginal inhabitants of this region whom he was considering as the only not demoralized people of the island and soon he became a specialist of their culture and language. Thanks to him is known nowadays the disappearing now culture and language of the Ajne nation. Pilsudski left thousands of pages of words and texts in the languages of Ajne, Niwchijsk and Orock nations and several hundreds of pictures, which he had shot during his exploration voyages. The most interesting material are the rubber and wax phonographic cylinders with the recorded by the explorer songs, prayers and legends of the nations of Sachalin. Up to now are kept preserved about 80 unique such cylinders, which only in 1983 have been reconstructed and read thanks to the laser technique at the University of Hokkaido in Sapporo. Based on the recorded by Pilsudski materials, which are a priceless document for the contemporary scientists, has been even originated a musical, and the Japanese children sing a song "about the extraordinary stories coming from the wax cylinders of uncle Piusutsuiki".