Fossils, reconstruction of dinosaurs and other prehistoric animals, paleontologists, contributors to Paleontology science, Charles Darwin on stamps, postal stationeries and postmarks of Poland


Contents:
Poland, officially the Republic of Poland, is a country in Central Europe, situated between the Baltic Sea in the north and two mountain ranges in the south. Bordered by Germany to the west; the Czech Republic and Slovakia to the south; Ukraine and Belarus to the east; and the Baltic Sea, Kaliningrad Oblast (a Russian exclave) and Lithuania to the north.
The total area of Poland is 312,679 square kilometres, a population of over 38.5 million people. The capital and largest city is Warsaw. [R1]

Dinosaurs were present in Poland mainly in the south (Silesia and the Świętokrzyskie Mountains), because during the Mesozoic era, the areas of today's Poland located north were mostly covered by water. The most numerous dinosaur fossils on the territory of our country are the so-called traces (footprints) left by reptiles walking on wet sand. 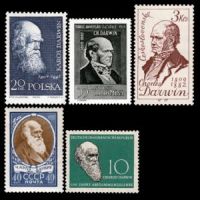 Year 1959 was both the 150th anniversary of the birth of Charles Robert Darwin, and the 100th anniversary of the publication of his most famous work "On the Origin of Species by Means of Natural Selection".
Distinguished from 2009 when half of the world issued stamps and postmarks to celebrate his 200 anniversary, in 1958-1959 only 5, all communistic, countries signed this event by stamps: GDR (1958), USSR, Czechoslovakia, Romania and Poland.

[2] Aleksander Piotr Czekanowski (12 February 1833 – 30 October 1876) was a Polish geologist, paleontologist and explorer of Siberia.
During his studies in Kiev and Dorpat and his later period of employment, Czekanowski carried out studies in the natural sciences, collecting material and making observations. In Podole he gathered together rich collections of Silurian fossils; the armored fish from these collections were later added to by the paleontologist Friedrich Schmidt. Studying in Dorpat under the guidance of the geologist K. Grewingk, Czekanowski collected rich paleontological material from the Baltic Paleozoic and organized the mineralogical collections of the university. [R3] 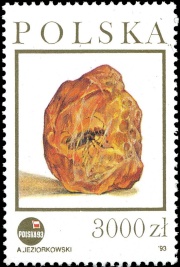 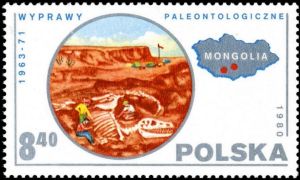 [3] In 1980 Post of Poland issued a set of 6 stamp of "Polish scientific Expeditions". One of these stamps shows Tarbosaur excavation by Polnish-Mongolian Paleontological Expedition in Gobi desert between 1967 and 1971.
Under the agreement signed in Ulan Bator in May 1969 between the Polish and Mongolian' Academics of Sciences, 2 large Polish-Mongolian expeditions were to be organized in 1970and 1971to continue the work done in 1963-1965. They were to work in the same regions as in previous years,that is in Bayn Dzak and in the Nemegt Basinand surrounding area.
During the 2 month stay in Nemegt the many dinosaur specimens from the Upper Nemegt Beds were discovered. Among them two incomplete skeleton of Tarbosaurus sp. and several fragments of the skeletons of the same species.

[4] Roman Kozłowski (February 1, 1889 – May 2, 1977) was a Polish paleontologist, best known for his work on graptolites (are colonial animals known chiefly as fossils from the Middle Cambrian). He was the founder of Polish palaeontology and the Institute of Palaeozoology PAS ( now the Institute of Paleobiology PAS) in 1952. [R5]

[5] One of the stamps from "Amber routes" set, with face value of 3000zl shows insect in amber.
Such ambers found in big quantity in Poland and Lithuania, as shown on a tab of Lithuanian amber stamps in 2009.

Other stamps of Poland to consider: contributors to Paleontology

Ignacy Domeyko or Domejko, born in Novohrudak, now Karelichy District , Belarus, 31 July 1802 – 23 January 1889, Santiago de Chile, was a Polish geologist, mineralogist and educator. Domeyko spent most of his life, and died, in his adopted country, Chile. He lived some 50 years in Chile and made major contributions to the study of that country's geography, geology and mineralogy. His observations on the circumstances of poverty-stricken miners and of their wealthy exploiters had a profound influence on those who would go on to shape Chile's labor movement. Domeyko, being not particularly interested in palaeontology, was sending occasionally the collected fossils to French specialists. These were studied mainly by A. d’Orbigny who, in honour of their discoverer, has named some of them, Fossil Nautilus domeykus, Ammonites domeykanus and many more. They are actually ex posed at the Museum of Natural History in Paris together with preserved remarks of this distinguished French paleontologist. [R4]
Joint issue with Chile. Stamp of very similar design issued in Chile on 11th April 2002.

Notes:
[PM1] Jan Czerski was a Polish paleontologist (osteologist), geologist, geographer and explorer of Siberia. He was exiled to Transbaikalia for participation in the January Uprising of 1863. A self-taught scientist, he eventually received three gold medals from the Russian Geographical Society, and his name was given to a settlement, two mountain ranges, several peaks and other places. He authored the first map of Lake Baikal and died during an expedition to Kolyma. During his expeditions he collected and cataloged over 2,500 of ancient bones, publishing in 1888 a large work on Quaternary Period (from 2.588 ± 0.005 million years ago to the present) mammals followed by an even larger work on the Siberian mammals relics in 1891. [R7]
To date (2020) Jan Czerski commemorated on two stamps only - Poland 2002 (with Coelodonta skeleton on the background) and Belarus 1995 (see on the right)

Notes:
[PS1] The Kraków-Częstochowa Upland, also known as the Polish Jurassic Highland or Polish Jura (Polish: Jura Krakowsko-Częstochowska), is part of the Jurassic System of south–central Poland, stretching between the cities of Kraków, Częstochowa and Wieluń. The Polish Jura borders the Lesser Polish Upland to the north and east, the foothills of the Western Carpathians to the south and Silesian Upland to the west. The Polish Jura consists of a hilly landscape with Jurassic limestone rocks, cliffs, valleys and vast limestone formations, featuring some 220 caves. The relief of the upland developed since the Paleogene, under climatic conditions changing considerably. Its main component is a peneplain, crowned by monadnocks, rocky masses that resisted erosion, generated as hard rock on Late Jurassic buildup surrounded by less resistant bedded limestone of the same age. The Polish Jura is visited by roughly 400,000 visitors a year. Part of it belongs to the Ojców National Park, the smallest of Poland's twenty national parks, ranking among the most attractive recreational areas of the country. [R8]

Since its start, the Institute has conducted biologically-oriented research on ancient life. Descriptions of fossil biota are accompanied by comparative studies of their Recent counterparts.
The scope of its research covers vertebrates, invertebrates and microfossils of various origins.
The Institute has organized and participated in scientific expeditions to various areas of the world (Mongolia, Spitsbergen, Antarctica). A scene of one of such expedition commemorated on Polnish stamp in 1980 and shows excavation of Tarbosaurus Bataar dinosaur (relative of Tyrannosaurus Rex) by Polnish paleontologist in Mongolia.
Many fossils which discovered and brought to Poland by the stuff of the Institute can be seen in its museum - the Museum of Evolution of the Institute of Paleobiology [R5]