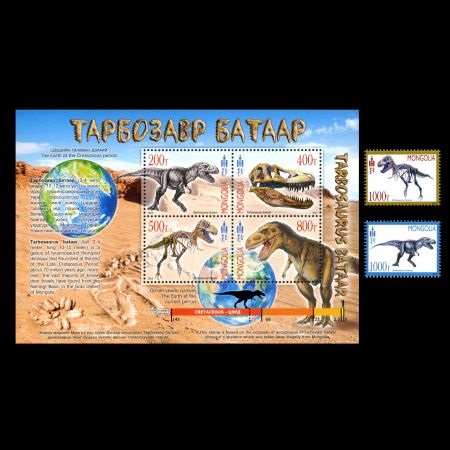 The Ministry of Culture, Sport and Tourism of Mongolia together with the "Mongol Post" (Mongol Shuudan) had jointly released the postal stamp Tarbosaurus Bataar". Both organizations officially introduced the new postal product to the Central Dinosaur Museum (CDM) on Thursday, July 24th, 2014. The stamps are 25.5 х 34 mm and come in a range of values from 200 MNT to 1,000 MNT, printed as a block of 4 stamps and two sheets, 20 stamps each and shows both fossil and reconstruction of the dinosaur. The set is dedicated to 70-million-year-old Tyrannosaurus bataar.


Tarbosaurus is a genus of tyrannosaurid theropod dinosaur that flourished in Asia about 70 million years ago, at the end of the Late Cretaceous Period. Fossils have been recovered in Mongolia, with more fragmentary remains found further afield in parts of China.
Although many species have been named, modern paleontologists recognize only one, T. bataar, as valid. Tarbosaurus and Tyrannosaurus, if not synonymous, are considered to be at least closely related genera. Like most known tyrannosaurids, Tarbosaurus was a large bipedal predator, weighing up to six tonnes and equipped with about sixty large teeth. It had a unique locking mechanism in its lower jaw and the smallest forelimbs relative to body size of all tyrannosaurids, renowned for their disproportionately tiny, two-fingered forelimbs. It was an apex predator, preying on other dinosaurs.

In 1946, a joint Soviet-Mongolian expedition to the Gobi Desert in the Mongolian Ömnögovi Province turned up a large theropod skull and some vertebrae in the Nemegt Formation. In 1955, Evgeny Maleev, a Soviet paleontologist, made this specimen of a new species, which he called Tyrannosaurus bataar. The specific name is a misspelling of the Mongolian баатар/baatar ("hero")


Nearly complete Tyrannosaurus bataar skeleton was returned to Mongolia following the high-profile prosecution of a Florida paleontologist by federal authorities in New York after it was sold at a Manhattan auction for $1.05 million.

During the ceremony of introduction on new postal stamp "Tarbosaurus Bataar", the Minister of Culture, Sport and Tourism Ts.Oyungerel noted
"After the rare findings of the Tarbosaurus Bataar skeleton, the noticeable sculpture artworks and fine-art paintings have been delivered; and this time, the new postal stamp was also released with great efforts from the "Mongol Shuudan". This remarkable event will surely contribute to protect our cultural heritages as well as to provide value-added cultural and economic impact to Mongolia.... The launch of these new postmarks celebrates both the 90th anniversary of Mongolia’s postmark production and modern museum establishment in Mongolia. It is delightful to see Bataar becoming the theme of postmarks.”
The original painting of the “Tarbosaurus Bataar” postal stamp was drawn by the painter Ch.Bat-Erdene and graphically designed by J.Gankhuyag.
Ch.Bat-Erdene talked about how he created Bataar, “Postmark depictions require more intricate drawings compared to other pieces for publications. I spent two months drawing Bataar for the postmarks. Each depiction to be used for postmarks is always based on detailed research before going to design, as they represent Mongolia’s name in the international postage market.”

“The Central Dinosaur Museum ” in Ulaanbaatar was established to protect, register and verify fossil, all in order to preserve Mongolian heritage for future generations. The museum open its doors on February 21st , 2013 in the building of former Lenin museum, which was in operation until 1990s. The very first ehibition "Tarbosaurus bataar come home" took place between June 8th and September 15th, 2013. Estimated amount of visitors of the exhibition is a half of million and is the Mongolian records of most visited museums. During the exhibition the museum run some educational programs for kids and student about dinosaurs and paleontology. To date this is the only dinosaur in Mongolia. Another exhibition "Tarbosaurus bataar and amazing dinosaurs" is open on July 10th 2014. This exhibition shows Tarbosaurus bataar as well as many other dinosaur's fossils such as Saichania, Gallimimus, Oviraptor, Protoceratops. Central Dinosaur Museum has introduced 48 different dinosaur-themed postcards since last year as well as painting and the story books for children in which described the overall processes of carrying up the skeleton of the T-Bataar from United States to Mongolia, which later on led to build the museum specially dedicated to the Mongolian dinosaurs so called “The Central Dinosaur Museum” in Ulaanbaatar city. Mongol Post expressed its interest in opening a branch in the CDM building, as tourists prefer to send or collect postcards to write about their impressions of museums they’ve visited.

Thestory of Tarbosaur bataar
A nearly complete skeleton of a towering Tyrannosaurus bataar is set to go on Texas-based Heritage Auction on Sunday , May 20, 2012. The Tyrannosaurus bataar was uncovered in the Gobi Desert roughly eight years ago and has an estimated value of $950,000. Also called Tarbosaurus bataar, this species is an Asian relative to the North American T. rex. While the specimen's skull is 80 percent complete, the body is about 75 percent complete.
There was no reasonable doubt that the Tarbosaurus had been stolen. China and Mongolia strictly regulate who is allowed to launch dinosaur expeditions and collect fossils and where those specimens must be reposited. There was no legal route by which the dinosaur could have ended up in a New York City auction. Days before it was set to be sold, paleontologists and the president of Mongolia objected to the auction. Paleontologist Mark Norell of the American Museum of Natural History, who has worked extensively in Mongolia, pointed out that the dinosaur must be an illicit specimen from the Gobi Desert. According to Mongolian heritage laws, any recovered bones must ultimately rest within an approved Mongolian institution.
Heritage Auctions pooh-poohed the concerns and affirmed that the auction house trusted the dealer it was working with. Greg Rohan, president of Heritage Auctions, steadfastly defended the auction, whining that it was too close to the date of the auction to do anything about the complaints of the Mongolian government and concerned researchers. Lawyers working in concert with the Mongolian government entered the kerfuffle and demanded that the auction be halted until the provenance of the skeleton could be settled. The auction went ahead as scheduled. In the middle of the bidding, a lawyer announced that he had on the phone a judge who had issued an order against the sale. Even this last-minute tactic didn’t stop the bidding. The final price of the Tarbosaurus was just over $1 million. Fortunately, the unknown buyer couldn’t simply walk off with the dinosaur. Investigations continued, now with the begrudging assistance of Heritage Auctions, and Norell and other paleontologists confirmed that the tyrannosaur must have been uncovered in Mongolia. More than that, what was billed as a nearly complete individual animal turned out to be made of several different dinosaurs. (Surprise, surprise, the smuggler wasn’t honest about his wares. Many dinosaurs that appear at auction houses are not as complete or well-preserved as they might appear to the untrained eye.)
The investigation revealed that the origin of the bones had been obscured by shipping them from Great Britain to the United States labeled as assorted reptile fossils. By June 22, Eric Prokopi - a self-described "commercial paleontologist" was identified as the dealer, and the skeleton had been seized by the United States government. He was arrested on October 17, 2012, on "one count of conspiracy to smuggle illegal goods, possess stolen property, and make false statements, one count of smuggling goods into the United States, and one count of interstate sale and receipt of stolen goods," a press statement read. Prokopi pled guilty to the charges on December 27, 2012. His cooperation during the investigation led to the discovery of several other stolen fossilized remains. He has been sentenced to three months in prison, Associated Press reported..
On May 17, 2013, the 70-million-year-old Tyrannosaurus Bataar skeleton has finally arrived on its homeland. The delivery landed on “Chinggis Khaan” International Airport at 11:15 pm, where authorities from the Government including Head of the Office of the President P.Tsagaan, Minister of the Cabinet Office of the Government of Mongolia Ch.Saikhanbileg, Minister for Culture, Sports and Tourism Ts.Oyungerel and other officials were present to receive the T-Bataar. The fossils were packaged in 7 boxes and delivered by “Korean Air”. This is the first ever repatriated fossils and officials said dozens of dinosaur findings will be returned by air and ship transportation soon.