Contents: East Germany, formally the German Democratic Republic or GDR (German: Deutsche Demokratische Republik or DDR), was a state within the Eastern Block during the Cold War period. From 1949 to 1990, it administered the region of Germany which was occupied by Soviet forces at the end of the Second World War—the Soviet Occupation Zone of the Potsdam Agreement, bounded on the east by the Oder–Neisse line. The Soviet zone surrounded West Berlin, but did not include it; as a result, West Berlin remained outside the jurisdiction of the GDR.
In 1989, numerous social and political forces in the GDR and abroad led to the destruction of the Berlin Wall and the emergence of a government committed to liberalization. The following year open elections were held, and international negotiations led to the signing of the Final Settlement treaty on the status and borders of Germany. The GDR was dissolved and Germany was unified on 3 October 1990. [R1]

With the formation of the German Democratic Republic (GDR) the Deutsche Post of the GDR service was established as the governmental agency to provide mail services. Its first stamp was released on October 9, 1949. Stamps were to some degree used to gain currency abroad, that is some stamps were not produced for circulation but sold directly to stamp dealers. With the 1990 reunification, the Deutsche Post became part of the Deutsche Bundespost. [R2]

[2] Frog, Palaeobatrachus diluvianus, fossil shown on stamp with face value of 35pf. Palaeobatrachus was a genus of primitive frogs from Europe that existed from the Cretaceous to the middle Pleistocene period (621-568 thousand years ago).
P.S. The are only few stamps and postmarks of prehistoric frogs. 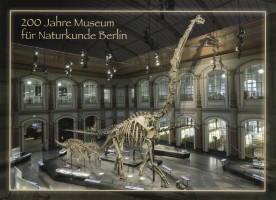 The only dinosaur stamps of East Germany. Stamp with fossil of Kentrurosarus issued in separate as other four stamps as well as in a block of four stamps with many fossils of marine prehistoric animals on margin.
The Museum of Natural History is a natural history museum in Berlin with over 30 million objects.
Originally designed as a three-winged building according to the plans of August Tiede, it was opened in 1889 and brought together three previously independent institutions of the University of Berlin: the Geological-Paleontological, the Mineralogical-Petrographic and the Zoological Museum (established in 1809).
One of the most famous dinosaur's skeleton in collection of the museum is skeleton of Brachiosaurus brancai, shown on stamp with face value of 50pf.
The dinosaur appeared on German stamp and special postcard in 2010, when the Museum of Natural History of Berlin celebrate its 200th anniversary, as the count it from establishment of Zoological Museum in 1809 which is now part of the Museum of Natural History.

Other stamps of East Germany to consider: contributors to Paleontology


Notes:
[A1] Georgius Agricola was fossil collector and also known as the father of mineralogy

[A2] Alfred Wegener shown on stamp with face value of 25pf


Notes:
[PS1] 100 years since death of Charles Darwin. Tree of life and quote from his most famous book "Origin of Species by Means of Natural Selection". There are also commemorative postmark with portrait of young Darwin issued for this event.

[PS2] Exhibits of Museum of Prehistory and Early History of Thuringia explain 400.000 year history of the region, includes remains of Neanderthal and their flint tools, as shown on illustration of the postcard.

Other Postal stationery of East Germany to consider: flint tool, contributors to Paleontology and Paleoanthropology science

[PSA2] "Cranial surgery". The text on the button-left side says-frequent medical intervention on the skull of living humans in the Jungsteinstein with the help of flint tools.

[PSA3] Thomas Henry Huxley (4 May 1825 – 29 June 1895) was an English biologist and anthropologist specializing in comparative anatomy. He is known as "Darwin's Bulldog" for his advocacy of Charles Darwin's theory of evolution. Some animals and human skulls shown on the postcard too.

Legend is here
Notes:
[C1] Fossils of Cave Bears found in many caves across Germany

Other Postmarks of East Germany to consider: flint tool, contributors to Paleontology and Paleoanthropology science