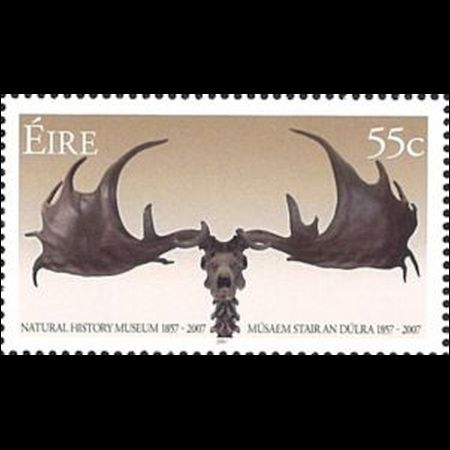 On October 10, 2007, Post Authority of Ireland, An Post, issued a signle stamp to commemorate 150 anniversary of Natural History Museum.


Built in 1856 as the Museum of the Royal Dublin Society, the Natural History Museum, which opened to the public in 1857, is a zoological museum containing diverse collections of world wildlife.
The collection comprises over 10,000 animals and the museum is also a major scientifc institution with signifcant research collections from Irish scientists and international figures.
It moved to its present building in 1857 and became part of the National Museum of Ireland in 1877, constructed as an extension to the museums headquarters in Leinster House. The anniversary of the Natural History Museum coincides with a major restoration programme. This aims to maintain and enhance the historic character of the building. Public access is being improved and visitor facilities are being added to provide for educational activities.


The stamp, designed by Steve Simpson, based on a specially commissioned photograph of the Giant Elk from the Museum Collection and shows historical fossil - a part of very first skeleton of Megaloceros giganteus (also called Irish Elk or Irish Deer) that unearthed in Ireland.
Megaloceros giganteus,is contemporary of Mammoth and wooly Rhinoceros, was indeed a Giant, as males were up to 700 kg in weight and stood about 2.1 meters tall at the shoulders. They carried proportionally huge antlers with a maximum tip to tip length of 3.65 meters. The antlers were up to 50 kg in weight, which are the largest antlers of any known deer. Similar to modern deer, the female animals were smaller and antlerless, while males replaced their antlers every mating season.

According to the recent research Megaloceros giganteus, most closely related to the living fallow deer (Dama dama).
They lived during the Pleistocene Epoch, between 2.6 million years ago and 11,700 years ago in in Europe and Asia. A small population of Megaloceros giganteus survived in the Siberian region of Russia until 7,000 years ago (probably even to more recent time). Therefore most of of their fossils unearhed in bog or swam pits.
The oldest recorded find of a “Giant Deer” in Ireland dates to 1588 when a skull with antlers of Megaloceros giganteus was discovered in a bog in Co. Meath. This information comes from a drawing that was part of a letter from Adam Loftus (official representative of the British Crown in Ireland) to Robert Cecil (was Secretary of State to Queen Elizabeth I, one of her highest officials). The drawing was accompanied by a letter in 1597 that was sent with the antlers to England where it is assumed that Cecil put them up on the wall of his home at Theobalds House, Hertfordshire. Unfortunately it not survived until today.

The oldest fossil of Megaloceros giganteus that survived till today is a braincase and part of antlers that was found in Bad Cannstatt village near Stuttgart in Germany, in 1600. As it was a different from any known ruminant, it was kept in a curiosity cabinet. Nowadays it is on display in Natural History Museum in Stuttgart.

It was only in 1697 when the Irish aristocratic scholar Thomas Molyneux identified large antlers from Dardistown, Dublin — which were apparently commonly unearthed in Ireland, as belonging to the “Great Irish Elk”. Molyneux describe the antlers: “Such another Head, with both the Horns entire was found some Years since by one Mr. Van Delure in the County of Clare, buried Ten Foot under Ground in a fort of Marle, and were presented by him to the late Duke of Ormond, then Lord Lieutenant of Ireland, who valued them so highly for their prodigious largeness, that he thought them not an unfit Present for the King, and sent them for England to King Charles the Second, who ordered them to be set up in the Horn-Gallery at Hampton-Court; where they may still be seen among the rest of the large Heads both of Stags and Bucks that adorn that Place, but this so visually exceeds the largest of them, that the rest appear to lose much of their curiosity”.


Molyneux, as well as all other scientists at this time who believed in the Divine creation of the Earth and its life, had difficulty finding an explanation about extinction of the animal. It was a common belief at this time, that a God who created the world and all that was in it would not allow his creations to disappear from existence. "That no real species of living creatures is so utterly extinct, as to be lost entirely out of the World, since it was first created, is the opinion of many naturalists; and 'tis grounded on so good a principle of Providence taking care in general of all its animal productions, that it deserves our assent".

Not finding the Irish elk in Ireland, he he concluded that it was once abundant on the island, suggested that an epidemic distemper as a cause of the animal's extinction and believed that the antlers belonged to an Irish version of the American moose, of which he had only a hazy idea. The English word for moose was elk and so the "Great Irish Elk" was born. The misnomer would last for centuries.

Only in 1812 French scientist Georges Cuvier, who first developed the theory of extinction caused by catastrophes responsible for wiping out the Earth’s species “to prove the existence of a world previous to ours, destroyed by some kind of catastrophe”, documented that the Irish elk along with other fossil vertebrates such as the mammoth, did not belong to any living species of mammal, declaring the “Irish Elk” as the most famous of all fossil ruminants: "in some parts of the country they have been found so often, that far from being regarded as objects of any extraordinary interest, they have been either thrown aside as lumber, or applied to the commonest economical uses."

Even thought many skulls and antlers of the Giant Deer discovered in bogs of Ireland, it took almost two and half century untill the first nearly complete skeleton found in Ireland. It is happened near Lough Gur, at Castlefarm, Rathcannon near Limerick city in 1824, in a marl layer underlying peat. It was donated by William Wray Maunsell, the Archdeacon of Limerick to the Royal Dublin Society and It is the one of three skeletons mounted at the first hall of the museum (the skeleton on the right at the front entrance).

Ironically, it was only the second skeleteon of "Irish Elk". The very first one discovered on Isle of Man in 1819.
The specimen was reconstructed by Irish surgeon John Hart, who described and illustrated it in a Booklet published in 1825.

Rise of international interest in fossils of Irish Elk cause to a big international trade in Megaloceros from Ireland. Over 100 heads, good and bad and at least 5 more or less complete skeleteons of Megaloceros giganteus found in Irish bogs (mostly near Limerick and Dublin) during 19th century. Many of it were exported to Natural History Museums and private collections abroad. One of this skeletons crossed Atlantic ocean and was mounted in American Museum of Natural History in New York in 1872 – the first Megaloceros giganteus on American continent. The biggest fossil found of Megaloceros giganteus in a single site, reported from Ballybetagh bog, near Dublin in 1847 and 1876, skulls and antlers of some thirty deer together with many of other bones has been excavated. According to Antony D. Barnosky who researched this remains in 1980th and published his report “Taphonomy and Herd Structure of the Extinct Irish Elk, Megaloceros giganteus” in 1985, the site represented a herd of bachelors, where occasionally individuals died each winter at a watering hole. To date, the Natural History Museum in Dublin, also called Dublin's Dead Zoo, includes 10 skeletons of the “Irish Elk” in their collection, three of which are mounted for display at the entrance, and the remains of 250 others are kept in storage rooms.

Acknowledge:
Many thanks to Mr. Nigel T. Monaghan, Keeper of Natural History Division National Museum of Ireland, for his help in finding information for this article.
Many thanks to Dr. Peter Voice, Department of Geological and Environmental Sciences, Western Michigan University, USA, for his help in finding information and for review draft page of the article.