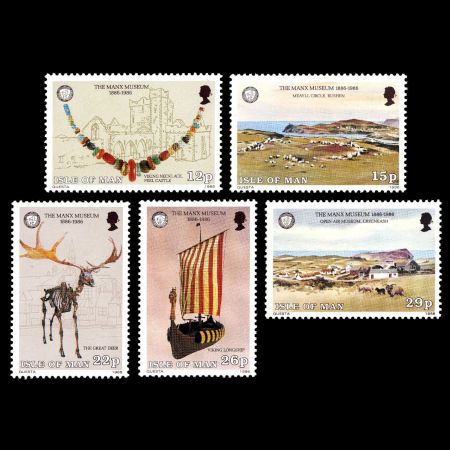 On February 2nd, 1986 Post Authority of Isle of Man issued a set of 5 stamps to commemorate 100 anniversary of "The Manx Museum"


The Manx Museum is the treasure-house of the Manx people and the headquarters of the Manx National Trust and of the branch museums at Castletown (Nautical Museum), Cregneash (Village Folk Museum), and Ramsey (Rural Life Museum).
Totally distinctive in character, it is devoted to the Isle of Man in all its aspects and extends from prehistoric times right up to the present day. In 1986 ISLE 0F MAN POST OFFICE commemorate the Centenary of the Manx Museum and Ancient Monuments Act (1886) by which Tynwald, the Island's Parliament, recognised the need for official preservation of the Island's history.
In 1922 the early work of the Manx Museum Trustees was centralised by the provision of land and buildings, through the generosity of the Trustees of the late Henry Bloom Noble, a wealthy Manx philanthropist. Since that time, extensions and development have increased the public and records areas. A new Art Gallery and Library were opened in 1936, a Natural History Gallery in 1937, and in 1960 further space was provided for the Museum's Library and Archives. The latter holds an unrivalled collection of Manx public records, private archives, newpapers, photographs. prints and maps, as well as printed books of Manx and general reference.


One stamp from the set, with face value of 22p, depicting a skeleton of "The Great Deer" (Megaloceros giganteus). The animals was an inhabitant of Man at the close of the Great Ice Age and became extinct in prehistoric times. 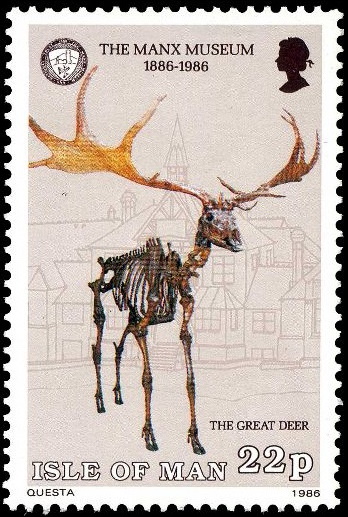 Megaloceros giganteus, also known as "Giant Deer" or "Irish Elk" (even thought it is not an elk, nor it unique to Ireland).
This deer, contemporary of Mammoth and wooly Rhinoceros, was indeed a Giant, as males were up to 700 kg in weight and stood about 2.1 meters tall at the shoulders. They carried proportionally huge antlers with a maximum tip to tip length of 3.65 meters.
The antlers were up to 50 kg in weight, which are the largest antlers of any known deer. Similar to modern deer, the female animals were smaller and antlerless, while males replaced their antlers every mating season.
According to the recent research Megaloceros giganteus, most closely related to the living fallow deer (Dama dama).
They lived during the Pleistocene Epoch, between 2.6 million years ago and 11,700 years ago in in Europe and Asia. A small population of Megaloceros giganteus survived in the Siberian region of Russia until 7,000 years ago (probably even to more recent time).


The very first, nearly, complete skeleton of Megaloceros giganteus in the world was found not in Ireland, but on Isle of Man.
It was in 1819 when a man called Thomas Kewish discovered it in a marl pit (by "marl” is usually meant an open-water mud rich in calcium carbonate deposited principally by the plant Chara. Such a mud gives clear evidence of the former existence of a lake in whose calcium-rich deposits bone would be readily preserved) at Loughan Ruy, a basin on the Ballaugh gravel fan, Isle of Man.
Only a few bones are missing in the skeleton, most notably the pelvis. Kewish used a large horse pelvis, among a few other things, to fill in the gaps. Kewish entered into a partnership with James Taubman, the tenant of the field where the fossils came from. They placed the mounted skeleton on display and charged admission to view it.
The Duke of Athol, who was the Queen’s Representative on the Isle of Man, later claimed the fossils as Lord of the Manor. After a lawsuit, the elk came into the Duke’s possession.
The Duke of Athol later gave the specimen to the Museum of the University of Edinburg. The Elk was later transferred with other specimens to the National Museum of Scotland on Chambers St, Edinburgh.
As it was the first skeleton of Megaloceros giganteus its drawing appeared in many scientific essey and books.

Today it is required to have an export licence to remove Giant Deer bones from the Island, but it is almost impossible to receive it.

The only other skeleton of Megaloceros giganteus found on the Isle of Man, to date, is the one shown on the stamp, was excavated at Close-y-Garey, St. John's in 1897, as the result of an intensive search for a complete specimen by the 'Elk Committee' led by P.M.C. Kermode, who later became the Manx Museum's first Curator. The skeleton is almost complete; the back of the skull and tail were missing at the time of excavation and have been replaced by modelled plaster. The two large neck bones were also missing and the gap filled by Irish bones supplied by the British Museum.
This skeleton is 1.7 metres tall at the shoulder, with an antler span of over 2.6 metres.
It was originally displayed in the temporary museum at Castle Rushen in 1905 before being transported to the Manx museum in the 1950s.


The collection of Megaloceros giganteus bone in the "Manx Museum" of Isle of Man is no way near as extensive as the one in Dublin, but bones turn up fairly regularly on the north-west coast and we have a few nice pieces, a sit happened in the Spring of 2018 for example:

Other 4 stamps of the set are:

12p value - Viking Necklace. Peel Castle offers rich testimony to the vicissitudes of Manx history through the centuries, from the early Celtic inhabitants through the age of Viking supremacy to the Stanley period. Since 1982, careful excavations, initiated by the Manx Museum and now supported by St. Patrick's Isle (Isle of Man) Archeological Trust, have revealedmany treasures from the past, and give promise of valuable and exciting discoveries in the future. This spectacular necklace, originally consisting of over 60 glass and amber beads, was found with other household goods in the Pagan Lady's Grave - the first female Viking grave discovered in the Isle of Man.

15p value - Meayll Circle. This megalithic chambered tomb is of a unique design. It consists of 6 pairs of burial chambers arrayed in a circle, with a passage leading inwards to the junction of each pair. First recorded in 1863 and first excavated in 1893, it is believed to date from the New Stone Age, around 2,000 BC.

26p value - Viking Longship. The arrival of early Viking raiders and their subsequent settlement made an enormous impact on the Isle of Man. This large-scale model, now on display in the Museum, was specially constructed in Norway in 1939 and is a faithful reproduction of the famous ship discovered at Gokstad, Norway. in 1880.

29p value - Cregneash. This village, preserved as a monument to the activities and environment of Manx people in bygone years, was the first publicly-owned open-air Folk Museum in the British Isles. The original buildings, some furnished as dwellings and others bearing evidence of traditional crafts, faithfully reflect the lifestyle of one of the last strongholds of Manx custom and tradition.


References:
Inside text of FDC;   Website of Manx Heritage Museum;
"First discoveries Megaloceros" by Michael Kogan (the author of this website) and Dr. Peter Voice, PhD Department of Geological and Environmental Sciences, Western Michigan University, USA;   Wikipedia;
"Cervus giganteus in the Isle of Man";   "Taxonomic problem of the giant deer Megaloceros giganteus";   "The Giant Deer in Ireland" (Studies in Irish Quaternary Deposits: No. 6)