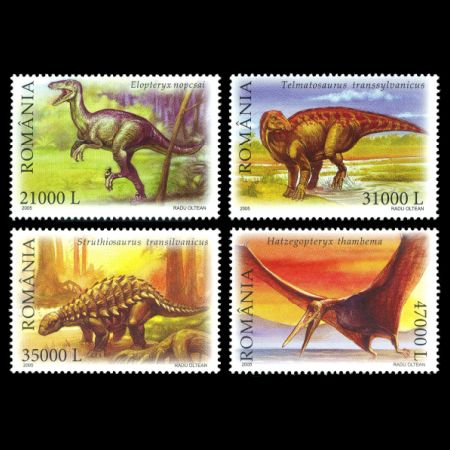 Romfilatelia, the specialized company in issuing and trading Romanian postage stamps, releases an issue dedicated to the natural patrimony of Romania, called "Dinosaurs from Tara Hategului"
Tara Hategului lies between the Retezat Mountains and the Sureanu Mountains and it is well renowned for the beauty of its landscapes, but also for its archaeological and hystorical vestiges, its old churches and its folk traditions. The traces of several dinosaurs species discovered here add a certain special interest to this land. The dinosaurs from Tara Hategului are famous all around the world and they also appear in the documentaries of the Discovery TV channel due to some peculiar aspects: they made up a last community of herbivorous and carnivorous dinosaurs, just before the final disappearance of those animals, 65 million years ago. Further more, all the species of this fauna were smaller in size compared to their relatives from other European regions. It was this specific feature, unique throughout the world, that drew them the name of "the Liliputian dinosaurs of Transylvania". Their small dimension can be explained by the environment they lived in - an island about the size of Corsica, surrounded by ocean. Giant reptiles flew above the Liliputian dinosaurs, as a biological paradox which increases the scientific interest raised by this fossil fauna from Tara Hategului. The places were the bones and the nests with eggs were discovered lie near Sarmizegetusa Ulpia Traiana, in the neighborhood of the Densus and Ru de Mori churches, of the Colt Castle and of the Retezat National Parc, this entire mirific region of the country being at present part of a special protected area: The Geoparc of the Tara Hategului Dinosaurs.