Portugal 2022 "250th anniversary Pombal's Reform of the University of Coimbra" 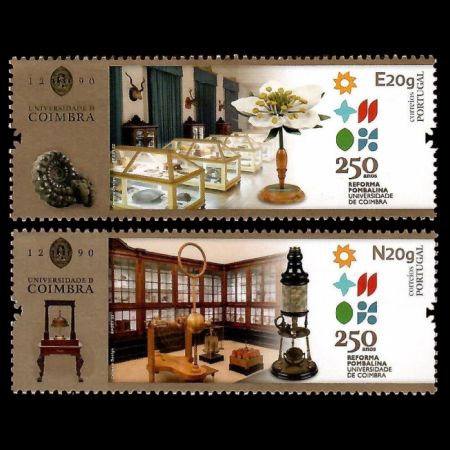 On May 6th of 2022 Post Authority of Portugal introduced a set of 2 stamps "250th anniversary Pombal's Reform of the University of Coimbra".

Ammonite fossil shell, Echioceras sp. shown on left side of the stamp with the face values of E20g.
Echioceras is an extinct genus of ammonites from the Early Jurassic (201.3 - 174.1 million years ago) of Europe and North America. Shell of Echioceras species can reach a diameter of about 4–6 centimetres. The narrow and broad evolute shell is reinforced by fine ribs on inner whorls, progressively becoming stronger, straight and distinct.


Evolute shells are shelles where younger whorls do not overlap earlier whorls.


The University of Coimbra is a public research university in Coimbra, Portugal. First established in Lisbon in 1290, it went through a number of relocations until moving permanently to Coimbra in 1537.

The university is among the oldest universities in continuous operation in the world, the oldest in Portugal, and played an influential role in the development of higher education in the Portuguese-speaking world. In 2013, UNESCO declared the university a World Heritage Site, noting its architecture, unique culture and traditions, and historical role.

It lends its name to the Coimbra Group of European research universities founded in 1985, of which it was a founding member. Enrolling over 20,000 students, more than 15% of whom are international, it is one of Portugal's most cosmopolitan universities.
The contemporary university is organized into eight Departments, including the Department of Earth Sciences.
The Department of Earth Sciences, created in 1991, is the heir of the Mineralogical and Geological Museum and Laboratory, whose origins date back to 1911. Its objectives are to promote the development of Earth Sciences, promote and carry out research in that scientific area, ensure its realization undergraduate and graduate courses and, among other missions, to support the community in solving problems within its scientific domain.

The antecedents of the study and teaching of Earth Sciences at the University of Coimbra date back to the creation in 1772, by the Pombaline reform, of the Natural History Museum, initially included in the Faculty of Philosophy and installed in the restored Colégio de Jesus. The pioneer in teaching Mineralogy, Geology and also Zoology was Domingos Vandelli; one of his disciples was José Bonifácio d'Andrada e Silva, a famous mineralogist and first professor of metallurgy at the University of Coimbra, as well as Intendente Geral de Minas and mentor of the independence of Brazil.

The scientific collections of the Museum of the University of Coimbra are unique in Portugal and are very important at the international level. The collections of Physics, Astronomy, Chemistry, Natural History and Medical Sciences are vital to the study of the Enlightenment period and of the attempt made at that time to discover, describe and understand the world, the space and the nature that surrounds us and to which we belong.

Upper row of the stamp sheet.

The mineralogy, geology, and paleontology collections include over 20,000 specimens collected since the 18th century from Portugal and Portuguese-speaking countries. The mineralogical collection contains foreign and Portuguese minerals and holds nearly five thousand specimens, organised according to the Strunz and Dana classification systems, as well as a series of crystallographic models. The rocks collection, both Portuguese and foreign, contains more than six thousand samples, mostly installed in the gallery of Sala Carlos Ribeiro.

The paleontological collection is the biggest and holds about ten thousand fossils. There is also an important collection of geological, cartographical, and related equipment. From the charts collection, of different types and scales, the relief maps of the 19th and 20th century clearly stand out, the biggest of which is a didactic map of Portugal with a length of 6 metres.


Acknowledgement:
Many thanks to Dr. Peter Voice from Department of Geological and Environmental Sciences, Western Michigan University, for the draft page review and his valuable comments.