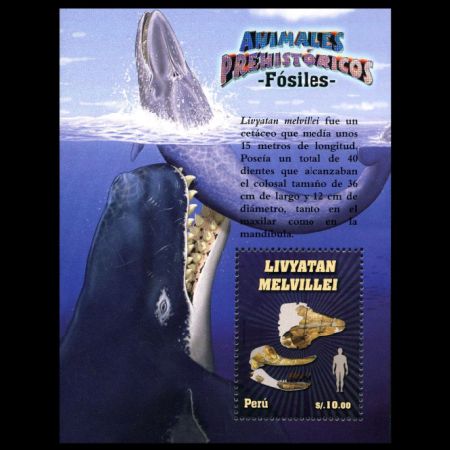 In November 2008, fossil remains of Livyatan melvillei were discovered in the sediments of Pisco formation at Cerro Colorado, 35 kilometres south-southwest of Ica, Peru. The remains include a partially preserved skull with teeth and mandible of a "sea monster" three times the size of a modern day killer whale. The teeth of "Leviathan Melvillei" were so large it was initially assumed they were elephant tusks.
"There were no elephants in South America before 3 million years ago, and the specimens found have an age of 12 to 15 million years, so that was impossible," said Professor Jelle Reumer, one of the team of scientists who found the fossil in the Pisco-Ica desert in coastal Peru.
They had been searching for other types of whale fossils in a remote area some 300 kilometers south of Lima. "The place where we found it was 20 kilometers from the nearest village," said Reumer, who is also director of Natural History Museum in Rotterdam.
Strong winds had shifted sand to expose a three-meter long fossilized skull. The skull of today's blue whale, still the largest animal ever known to have existed, is around six meters long.
The fossilized remains found in Peru include a jaw bone and several teeth, each around 12 centimeters in diameter and up to 36 centimeters in length.


The size of its teeth indicate that the mammal fed on large prey, possibly baleen whales which were plentiful at the time of the Leviathan's existence around 12 million to 13 million years ago, in the middle of the Miocene Age, Reumer said. It is not known why they became extinct. Reumer said it could have been due to "climatic deterioration."


"After the Miocene it became relatively much colder. At the same time the baleen whales became bigger probably to escape from predation from these animals, just the way elephants escaped predation by becoming bigger so they were not eaten by lions any more," he said. Baleen whales now grow to 30 meters in length. Back then, they were much smaller, around six to ten meters long.
Reumer says the Leviathan could be best compared to a modern killer whale. Killer whales feast on sea lions, seals, fish, birds and sometimes other whales.
Modern sperm whales have a completely different method of feeding; they suck in squid at depths of a kilometer or more and only have relatively small teeth on their lower jaw.The whale was named after the original Hebrew word for a mythical sea monster -- Livyatan -- and Herman Melville, the author of the novel Moby Dick.
The remains of the Leviathan Melvillei will remain in Peru at the Museo de Historia Natural in Lima. Casts of the three largest teeth are on display at the the Natural History Museum Rotterdam.
Reumer says there is very little chance another will be found. "It's a top predator so there were very few specimens living at any period of time. The chance that they are fossilized is very small and the chance that you find them is even smaller," he said.