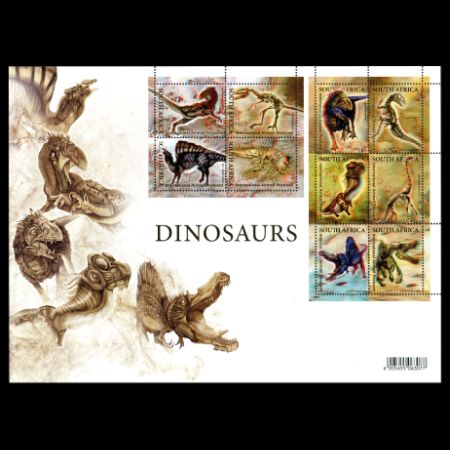 Since the discovery of the first nearly-complete dinosaur skeleton in 1858, dinosaurs have captured the imagination of scientists, writers, film-makers and the general public world wide. Although these pre-historic creatures have been extinct for millions of years, this discovery has virtually brought them back to life as they live on through films, books and scientific writings. With this set of ten dinosaur stamps, the South African Post Office is combining pre-history with modern technology by using the anaglyph method to create a three-dimensional effect.
In 1858, fossil hobbyist William Parker Foulke found the bones of an animal larger than an elephant. It was unlike anything he had seen before with features of both a lizard and a bird. The discovery of this pre-historic creature in Haddonfield, New Jersey in the USA had a major impact on the scientific world and changed our views of natural history forever. Dubbed Hadrosaurus foulkii, this dinosaur set the ball rolling for future discoveries.
Today, mounted dinosaur skeletons have become major attractions at museums around the world. Dinosaurs have become a part of world culture and are featured in best-selling books, films and in the media.

This set of self-adhesive dinosaur stamps is the first ever with a 3D effect to be issued by the South African Post Office. It will also be the first time that a pair of viewing glasses will be supplied with each stamp sheet and commemorative cover.
The method used to create this effect, is known as an anaglyph. An anaglyph is a stereo image that requires special glasses with red and green (or blue) lenses for 3D viewing. To achieve the effect, two views of a picture are printed in two colours, usually red for the left eye and blue or green for the right eye.
The stamps were illustrated by Chantelle Basson, a second-year Graphic Design student at the Open Window Academy in Pretoria. Five of the stamps depict skeletons of different types of dinosaurs, while the other five stamps show images of what scientists believe these creatures most probably looked like. All the dinosaurs depicting on the stamps have an African connection.