Paleontological Fossil Sites on stamps and other philatelic items

The best spot to collect fossils in Aland is Yttern's on the Jomala island.
The finds consist of trilobites and gastropods from the Ordovician period.
Some of these fossils were depicted on stamps of Aland in 1996 (see on the right). These fossils can be seen in University Museum in Helsinki, Finland.

Some farmers allow to tourist to collect fossils on their fields at Ordovician limestone blocks. [R1]

Known Philatelic items: commemorative stamp of Aland 2011.
back to the Top


Argentina: Ischigualasto formation - Talampaya Natural Parks. Paleontological location of Ischigualasto (Valle de la Luna)
These two contiguous parks extending over 275,300 ha in the desert region on the western border of the Sierra Pampeanas of central Argentina, contain the most complete continental fossil record known from the Triassic Period (245-208 million years ago).
Six geological formations in the parks contain fossils of a wide range of ancestors of mammals, dinosaurs and plants revealing the evolution of vertebrates and the nature of paleo-environments in the Triassic Period.
It is the only place in the world where nearly all of the Triassic is represented in an undisturbed sequence of rock deposits.
This allows for the study of the transition between dinosaurs and ancient mammals; research is ongoing.
Rhynchosaurs and Cynodonts are by far the predominant findings among the tetrapod fossils in the park.
Dinosaurs comprise only 6% of the findings, but these include early samples of the two major lineages of dinosaurs (Ornithischians and Saurischians).
The oldest dinosaur fossils, known to date, were discovered in the Upper Triassic Ischigualasto Formation. Thes fossils include several basal (primitive) dinosaurs, including Eoraptor (depicted on stamp of Argentina in 1998) and Herrerasaurus (depicted on stamp of South Korea in 2010). [R3]

Landscapes of Talampaya National Park shown on the following stamps:

back to the Top

This park is a protected area located in the northeast of the province of Santa Cruz, in the Argentinean Patagonia. It was created in 1952 with the purpose of preserving an area with a significant number of remarkably preserved petrified trees. The region that currently occupies the petrified forest is part of a geological formation whose antiquity corresponds to the upper Jurassic, approximately 150 million years ago. About 150 million years ago, during the late Jurassic period, the area occupied by this national park had a stable climate with abundant moisture. Dense forests with giant trees grew here, among which were Araucaria mirabilis, an ancient relative of modern species of Araucaria, a kind of evergreen conifer.
This changed at the start of the Cretaceous period, when volcanic eruptions, which coincided with the start of upthrusting of the Andes mountains, buried some of the Patagonian territory in ash and lava. Part of the forests covered by ash were subjected to the processes of petrification.
Some of the fossil trees are up to 30 m long and have a diameter of 2 meter. [R2]
One of these trees depicting on the right side of the stamp (see on the top-right).

It was officially recognised in 1994 for its extensive fossil record when the site was inscribed on the World Heritage List, along with Riversleigh. The park preserves 6 km of remnant vegetation, with 26 caves contained within the 3.05 km World Heritage Area.
The limestone of the area was formed from coral and marine creatures 200 million years ago and again 20 million years ago when the land was below sea level. Ground water since then has dissolved and eroded some of the limestone, creating the caves. The caves, such as the Victoria Fossil Cave and Blanche Cave, are often not far below ground, and holes open up creating traps for the unwary. This is the source of the remarkable collection of fossils. Mammals and other land creatures have fallen into open caves and been unable to escape. The fossil record has been preserved in strata formed from eroded topsoil washed and blown in. In some places, the fossil-bearing silt is up to 20 metres thick. Some of these areas are being preserved for future research when better methods of dating and reconstructing fossil records may have been found. These fossil traps are especially significant for tracing Australian megafauna.

In 1835 Danish paleontologist Peter Lund decided to settle in Lagoa Santa, in the state of Minas Gerais, Brazil, finding the perfect place to live quietly and develop his work. In nine years of research he explored more than a hundred caves, and found about 120 fossil species and 94 belonging to the current fauna. He thus became the Father of Brazilian Paleontology. These findings were of great importance for the studies undertaken by British naturalist Charles Darwin on the Theory of Evolution.
In 1844, Lund ended his work in the cave, and took a new direction in his research. In 1845, he sent his magnificient collection to the University of Copenhagen in Denmark and then devoted himself to botany. Currently this rich colection is at the Zoological Museum in Copenhagen.

Egypt: Wadi Al-Hitan, Whale Valley, in the Western Desert of Egypt
is a paleontological site in the Al Fayyum Governorate of Egypt, some 150 km southwest of Cairo[1]. It was designated a UNESCO World Heritage 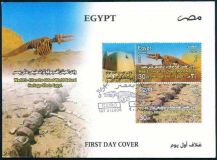 Site in July 2005 for its hundreds of fossils of some of the earliest forms of whale, the archaeoceti (a now extinct sub-order of whales). The site reveals evidence for the explanation of one of the greatest mysteries of the evolution of whales: the emergence of the whale as an ocean-going mammal from a previous life as a land-based animal. No other place in the world yields the number, concentration and quality of such fossils, as is their accessibility and setting in an attractive and protected landscape. This is why it was added by the UNESCO to the list of protected World Heritage sites.
The fossils found at the site may not be the oldest but their great concentration in the area and the degree of their preservation is to the extent that even some stomach contents are intact. The presence of fossils of other early animals such as sharks, crocodiles, sawfish, turtles and rays found at Wadi El-Hitan makes it possible to reconstruct the surrounding environmental and ecological conditions of the time, adding to its justification to be cited as a Heritage site.
The first fossil skeletons of whales were discovered in the winter of 1902-3.For the next 80 years they attracted relatively little interest, largely due to the difficulty of reaching the area. In the 1980s interest in the site resumed as four wheel drive vehicles became more readily available. Continuing interest coincided with the site being visited by fossil collectors, and many bones were removed, prompting calls for the site to be conserved. The remains display the typical streamlined body form of modern whales, yet retaining some of the primitive aspects of skull and tooth structure. The largest skeleton found reached up to 21 m in length, with well-developed five-fingered flippers on the forelimbs and the unexpected presence of hind legs, feet, and toes, not known previously in any archaeoceti.
Their form was serpentine and they were carnivorous. A few of these skeletal remains are exposed but most are shallowly buried in sediments, slowly uncovered by erosion. Wadi El-Hitan provides evidences of millions of years of coastal marine life.

The Dunarobba fossil forest nearby Avigliano Umbro, has been discovered in the 70s, but the work to bring it up to surface are not yet finished. All the trees belong to a family of sequoia which used to be present in this part of italy more than one million years ago. The particularity with this forest is that the trees lay in vertical position and not horizantally as it is the case for other fossil forests. This would confirm the theory that a flood could have overwhelmed the forest preserving it in the shape we admire today. The fossiles have enormous dimensions: 1.5 m in diameter and between 5 and 10 meters in high.