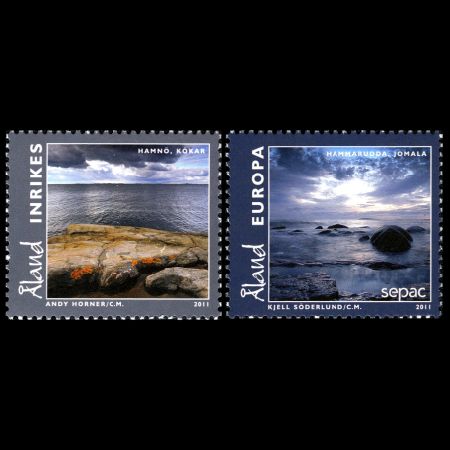 Jomala island, well known fossil-found place of Aland, can be seen on one of these stamps.
On the Aland islands between Sweden and Finland in the Baltic sea, you can find fossils from the Ordovician period.
This is a only place in Finland where you can find fossils. This fossils can be seen in University Museum in Helsinki.
East of the main island there is a 9 kilometre diameter crater (Lumparn). This crater was formed by a meteor or comet impact 1200 to 500 milion years ago.
It is possible to go to the Finnish Aland Islands by ferry from the Swedish or the Finnish mainland.
The best spot to collect fossils is Yttern's on the Jomala island. The finds consist of trilobites and gastropods from the Ordovician period. Some of these fossils were depicted on stamp of Aland 1996 (see on the right).
Some farmers allow to tourist to collect fossils on their fields at Ordovician limestone blocks.
Many farmers, however, don't like collectors and soon it will be also illegal export fossils from Finland.
The Aland Islands form an archipelago in the Baltic Sea. They are situated at the entrance to the Gulf of Bothnia and form an autonomous, demilitarised, monolingual Swedish-speaking region of Finland.