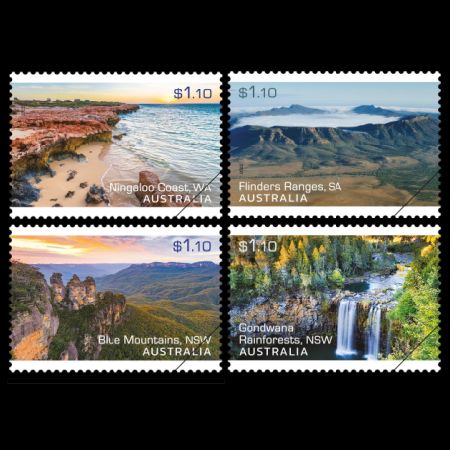 On February 23rd 2022, the Post Authority of Australia issued a set of 4 stamps "Our Beautiful Continent". This issue features landscapes from three UNESCO World Heritage properties and another recently included on the World Heritage Tentative List.

In 1946, while exploring for minerals, geologist Reginald Sprigg discovered fossil imprints in rocks around the low hills of the western Flinders Ranges at the old Ediacara minefield.
Sprigg's discovery was extremely important, as it was the first time the fossilised remains of an entire community of soft-bodied creatures had been found in such abundance anywhere in the world.
Sprigg's discovery was so significant that one genus of the fossils was named after him – Spriggina (shown on one of the stamps of Australia 2005 - below) and the Ediacaran Period was named after the location where the fossils were found.


The fauna is usually referred to as the Ediacara Fauna or the Vendian Fauna.
The Vendian Fauna gets its name from a site along the White Sea in Russia which has a similar fauna to the fossils found in Australia. The Russian site was actually found a little bit earlier.

The fossils preserved in the ancient sea-floor at Ediacara record the first known multicellular animal life on Earth that predates the Cambrian. This diverse and exquisitely preserved community of ancient organisms represents a significant snapshot of our geological heritage.
This discovery gave scientists a new understanding of the evolution of life on earth, as well as a better understanding of how fossils of organisms with soft tissue can become preserved in the fossil record.
The fossils of this period resemble the flatworms, soft corals and jellyfish we know today and range in size from a few centimetres up to a metre long.

Tha animals on the stamps above are: