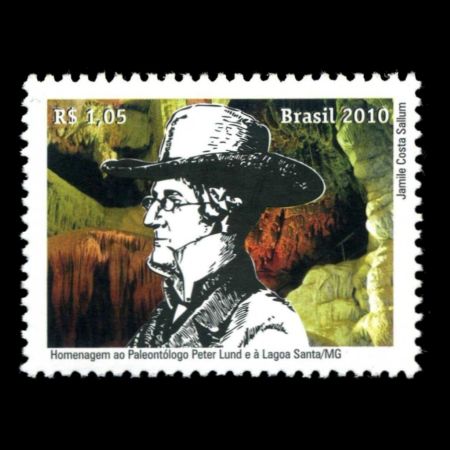 In the background the stamp displays a cave located in the interior of the municipality of Lagoa Santa, in the State of Minas Gerais, where the Danish paleontologist Peter Lund carried out some of his most important research and findings and lived most of his life
in the 19th century. In the center of the stamp, a picture of the researcher in his maturity years represents his dedication to science and appreciation of Lagoa Santa. Photography and computer graphics techniques were used.
Peter Lund, Danish paleontologist who came in Brazil for the firts time in 1833, to continue his studies in botany and zoology.He settled in Rio de Janeiro, where he made a thorough survey of all vegetation in the Baixada Fluminese area, and also analyzed the behavior of ants.

In 1835 he decided to settle in Lagoa Santa, in the state of Minas Gerais, finding the perfect place to live and develop his work quitely. In nine years of research he explored more than a hundred caves, and found about 120 fossil species and 94 belonging to the current fauna. He thus became the Father of Brazilian Paleontology. These findings were of great importance for the studies undertaken by British naturalist Cahrles Darwin on the Theory of Evolution.


In 1844, Lund ended his work in the cave, and took a new direction in his research. In 1845, he sent his magnificient collection to the University of Copenhagen in Denmark and then devoted himself to botany. Currently this rich colection is at the Zoological Museum in Copenhagen.