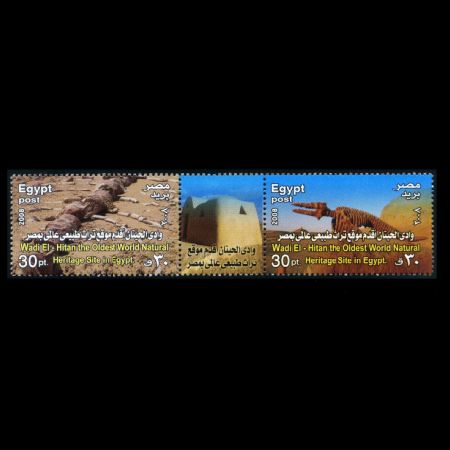 Wady Al-Hitan, is a paleontological site in the Al Fayyum Governorate of Egypt, some 150 km southwest of Cairo. It was designated a UNESCO World Heritage Site in July 2005 for its hundreds of fossils of some of the earliest forms of whale, the archaeoceti (a now extinct sub-order of whales). The site reveals evidence for the explanation of one of the greatest mysteries of the evolution of whales: the emergence of the whale as an ocean-going mammal from a previous life as a land-based animal. No other place in the world yields the number, concentration and quality of such fossils, as is their accessibility and setting in an attractive and protected landscape. This is why it was added by the UNESCO to the list of protected World Heritage sites.

The fossils found at the site may not be the oldest but their great concentration in the area and the degree of their preservation is to the extent that even some stomach contents are intact. The presence of fossils of other early animals such as sharks, crocodiles, sawfish, turtles and rays found at Wadi El-Hitan makes it possible to reconstruct the surrounding environmental and ecological conditions of the time, adding to its justification to be cited as a Heritage site.

The first fossil skeletons of whales were discovered in the winter of 1902-3. For the next 80 years they attracted relatively little interest, largely due to the difficulty of reaching the area. In the 1980s interest in the site resumed as four wheel drive vehicles became more readily available. Continuing interest coincided with the site being visited by fossil collectors, and many bones were removed, prompting calls for the site to be conserved. The remains display the typical streamlined body form of modern whales, yet retaining some of the primitive aspects of skull and tooth structure. The largest skeleton found reached up to 21 m in length, with well-developed five-fingered flippers on the forelimbs and the unexpected presence of hind legs, feet, and toes, not known previously in any archaeoceti.

Their form was serpentine and they were carnivorous. A few of these skeletal remains are exposed but most are shallowly buried in sediments, slowly uncovered by erosion. Wadi El-Hitan provides evidences of millions of years of coastal marine life.