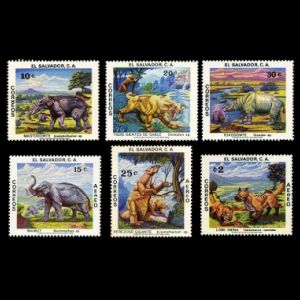 On September 7th, 1979 El Salvador issued a set of 6 stamps dedicated to prehistoric mammals that lived in our territory during Cenozoic Era. The issue's title is "Prehistoric Fauna from El Salvador". Stamp represent new (in 1979) exposition of Prehistoric life in Prehistoric animals museum of San Salvador.

El Salvador does not have dinosaur fossils because Central America appeared when dinosaurs were died out. During Mesozoic era the most part of Central America was marine bottom and was located where now is Mexico; for this reason the oldest life evidences are corals, algas, crabs, etc.

The first fossil's excavation in El Salvador were made by scientists David J. Guzman and Jorge Larde. In their papers, they make references to some sites where they found fossils. In 1942, a paleontologist who studied Salvadorean prehistoric mammals, Dr. R. A. Stirton discovered seven extint mammals that lived here.

The Natural History Museum of El Salvador had done an effort in order to catalogue the collection of prehistoric fauna and flora. During 70's, a paleontologist named Steve Perrigo arrived under initiative of Servicio de Parques Nacionales and Natural History Museum. He did excavation in many places and confirm the variaty of Pleistocene Central American fauna (last period of Cenozoic era). In that period the North and South of this continent were connected by Central America and intercontinental migration of animals was possible.

Comphotherium ( "Welded Beast") is an extinct genus of proboscid which evolved in the Early Miocene of North America from 13.6503.6 Ma, living about 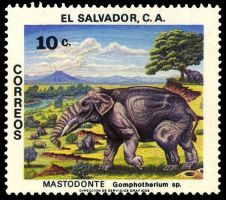 10 million years. The genus emigrated into Asia, Europe and Africa after a drop in sea level (probably during the Tortonian epoch) allowed them to cross over. It survived into the Pliocene, and its remains have been found in several locations around the world, include eastern country zone of El Salvador Gomphotherium stood around 3 metres (9.8 ft) high, and bore a strong resemblance to a modern elephant. However, it had four tusks; two on the upper jaw and two on the elongated lower jaw. The lower tusks are parallel and shaped like a shovel and were probably used for digging up food from mud. Unlike modern elephants, the upper tusks were covered by a layer of enamel. Compared to elephants, the skull was more elongated and low, indicating that the animal had a short trunk, rather like a tapir's. These animals probably lived in swamps or near lakes, using their tusks to dig or scrape up aquatic vegetation. In comparison to earlier proboscids, Gomphotherium had far fewer molars; the remaining ones had high ridges to expand their grinding surface. Gomphotherium inhabited dry wooded regions near lakes. 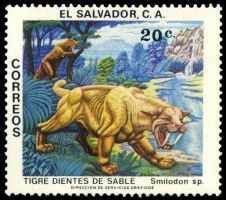 North America and South America, living from near the beginning through the very end of the Pleistocene epoch (2.5 mya 10,000 years ago). Fossils of Columbian mammoth found in eastern country zone of El Salvador. A fully-grown Smilodon weighed approximately 55 to 470 kg , depending on species. It had a short tail, powerful legs, muscular neck and long canines. Smilodon was more robustly built than any modern cat, comparable to a bear. The lumbar region of the back was proportionally short, and the lower limbs were shortened relative to the upper limbs in comparison with modern pantherine cats, suggesting that Smilodon was not built for speed.

Toxodon is an extinct mammal of the late Pliocene and Pleistocene epochs about 2.6 million to 16,500 years ago. It was indigenous to South America, and 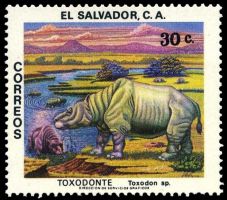 was probably the most common large-hoofed mammal in South America at the time of its existence. Charles Darwin was one of the first to collect Toxodon fossils, after paying 18 pence for a T. platensis skull from a farmer in Uruguay. In The Voyage of the Beagle Darwin wrote "November 26th - I set out on my return in a direct line for Monte Video. Having heard of some giant's bones at a neighbouring farmhouse on the Sarandis, a small stream entering the Rio Negro, I rode there accompanied by my host, and purchased for the value of eighteen pence the head of an animal equalling in size that of the hippopotamus. Mr Owen in a paper read before the Geological Society, has called this very extraordinary animal, Toxodon, from the curvature of its teeth." Since Darwin discovered that the fossils of similar mammals of South America were different than those in Europe, he invoked many debates about the evolution and natural selection of animals. Toxodon was about 2.7 metres in body length, and about 1.5 metres high at the shoulder and resembled a heavy rhinoceros, with a short and vaguely hippopotamus-like head. Because of the position of its nasal openings, it is believed that Toxodon had a well-developed snout. It had a massive skeleton, which suggests that it supported a large muscular body. It had short stout legs with three functional toes, with most of the body weight being borne by the central toe. 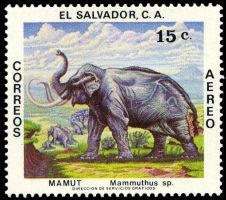 United States and to as far south as Nicaragua and Honduras) during the late Pleistocene. The Columbian mammoth was one of the last members of the American megafauna to go extinct, with the date of disappearance generally set at approximately 12,500 years ago.
The Columbian mammoth was one of the largest of the mammoth species and also one of the largest elephants to have ever lived, measuring 4 metres (13 ft) tall and weighing up to 10 metric tons (11 short tons). It was 10.7 feet (3.3 m) long at the shoulder, and had a head that accounted for 12 to 25 percent of its body weight. It had impressive, spiralled tusks which typically extended to 6.5 feet (2.0 m). Fossils of Columbian mammoth found in eastern country zone of El Salvador It was a herbivore, with a diet consisting of varied plant life ranging from grasses to conifers. It is also theorized that the Columbian mammoth ate the giant fruits of North America such as the Osage-orange, Kentucky coffee and honey locust as there was no other large herbivore in North America then that could ingest these fruits. 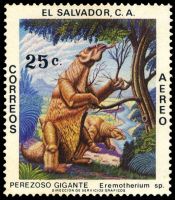 Megatheriidae, endemic to North America and South America during the Pleistocene epoch. It lived from 1.8 mya11,000 years ago existing (as a genus) for approximately 4.889 million years. Fossils have been uncovered at many coutries include El Salvador, at many county zones. El Salvador has a 7.6 m. fossil that is the tallest of Central American area


Borophagus ("gluttonous eater") is an extinct genus of the subfamily Borophaginae, a group of canids endemic to 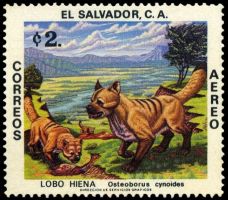 North America from the early Miocene epoch through the Zanclean stage of the Pliocene epoch 23.33.6 Mya. Borophagus existed for approximately 19.7 million years.Borophagus, like other borophagines, are loosely known as "bone-crushing" or "hyena-like" dogs. Though not the most massive borophagine by size or weight, it had a more highly-evolved capacity to crunch bone than earlier, larger genera such as Epicyon, which seems to be an evolutionary trend of the group (Turner, 2004). During the Pliocene epoch, Borophagus began being displaced by Canis genera such as Canis edwardii and later by Canis dirus.

Note: This page is incomplete, some info is missing. In case you have the any additional information please email to me.