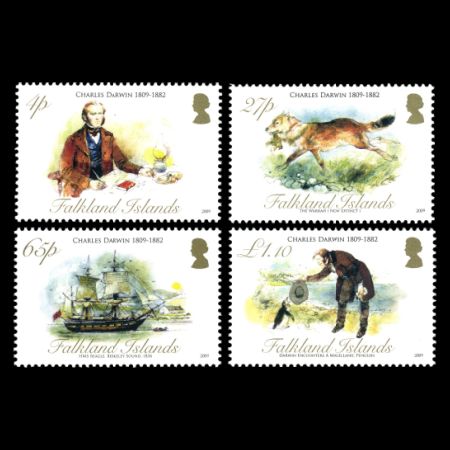 Darwin was the English Naturalist who laid the foundations of the theory of evolution by natural selection. The idea that plants and animals most suited to their environment are more likely to thrive and pass on their characteristics to future generations, leading to changes over time, seems quite obvious in the modern world. However, at the time most Europeans believed that the world was unchanging and had been created by God in seven days. To suggest otherwise was certain to cause considerable controversy.

For 20 years after the voyage of the Beagle, Darwin worked on his theories and collected the evidence to support them. When he learned that another naturalist, Alfred Wallace, had developed similar ideas the two made a joint announcement of their discovery in 1858, the year before Darwin published his most famous work On the Origin of Species by Means of Natural Selection.

The logical extension of his theories was that man was simply another animal that must have evolved, quite probably from apes. As expected Darwin was vehemently attacked by the Church. Yet within his own lifetime the fact of evolution had become widely accepted and by the 1930s his theories on natural selection came to be seen as the primary explanation of the process.

Born to a wealthy family Darwin initially planned to follow a medical career. However, appalled by the sight of operations performed without anaesthetic, he left Edinburgh University without a degree. His disappointed father then sent him to Christs College Cambridge (from where he graduated with a BA in 1831) in the hope that he might become a Church of England parson. Important friendships were made at this time. The Revds Adam Sedgewick, Professor of Geology and John Stevens Henslow, Professor of Botany, both encouraged his interest in Natural History and in 1831, at Henslows suggestion, he joined a five year scientific expedition on the survey ship HMS Beagle. 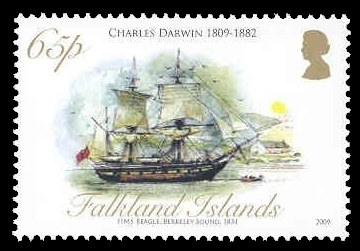 On 1 March 1833 it was with youthful and inexperienced eyes that Darwin first gazed on the shores of the Falklands, noting in his diary that ....the land is low and undulating with stoney peaks and bare ridges; it is universally covered by a brown wiry grass. The Beagle remained in Berkeley Sound, Port Louis for just over a month during which Darwins enthusiasm grew as he discovered fossils, examined stone runs and collected examples of the wildlife. The 400 million year old fossil shells that he found also occur in South Africa. Although he didnt realise it at the time, his find was a clue to the puzzle of continental drift.

Beagle returned to Port Louis 9 March 1834, again for about a month. In the 1830s the Falklands were a wild and lawless place and this 2nd visit was in the aftermath of a muderous rampage by renegade gauchos, refered to by Darwin as complicated scenes of cold-blooded murder, robbery, plunder, suffering, such infamous conduct ..... One of the 5 victims was Mathew Brisbane a partner in the Port Louis ranching enterprise whose body was recovered and interred by the crew of the Beagle. This time Darwin boldly set off inland on horseback with two of the Port Louis gauchos as guides. He noted in his diary they had no temptation to murder me and turned out to be most excellent .

During the journey Darwin and the gauchos lived off the land, butchering wild cattle as required, and spent two uncomfortable nights sleeping under their saddles. The weather was consistently bad ..... I suppose my horse fell at least a dozen times . He was not sorry to turn for home.

While anchored in port a packet ship arrived with mail and Darwin finally received a letter from his friend Revd. Henslow regarding the specimens he had been sending back to England. He learned that his shipments of specimens were arriving safely in Cambridge. Henslow found many of them to be very interesting indeed. Needless to say, this news excited Darwin a great deal. 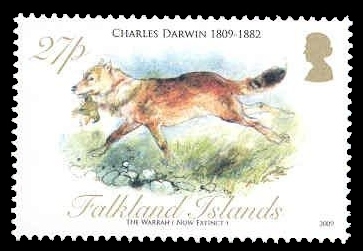 In the 1830s the native Falklands fox, the Warrah, was still common and widespread. Its presence puzzled Darwin who noted As far as I am aware there is no other instance in any part of the world, of so small a mass of broken land, distant from a continent, possessing so large a quadruped peculiar to itself. He was struck by the Warrahs inquisitiveness and lack of fear predicting that Within a very few years after these islands shall have become regularly settled, in all probability this fox will be classed with the dodo, as an animal which has perished from the face of the earth. Sadly he was right and the last know Warrah was shot in 1876. 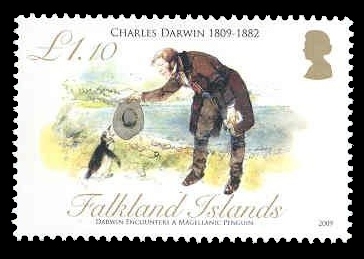 He was also struck by reports of subtle differences between the Warrahs of East and West Falkland and this interest, together with other notes in his journal, suggests that he was already thinking about the development of animals in isolation. This theme was to prove fundamental to his later ideas on evolution; the Warrah being mentioned in The Origin of Species

Naturally enough Darwins attention was also caught by penguins and he experimented by placing himself between a penguin and the sea. He was impressed when the undaunted bird, rolling its head from side to side, waddled directly towards him, pushing him aside. Of his time in the Falklands Darwin wrote my time passes evenly one day hammering the rocks; another pulling up the roots of the kelp for the curious little Corralines which are attached to them. HMS Beagle left the Falklands on April 7th 1834 to continue Darwins momentous voyage around the world. Perhaps the seeds of some revolutionary ideas had already been sown in his mind as a result of his time on the desolate Falkland Islands.