Contents:
Spain, officially the Kingdom of Spain is a sovereign state largely located on the Iberian Peninsula in southwestern Europe, with two large archipelagos, the Balearic Islands in the Mediterranean Sea and the Canary Islands off the North African Atlantic coast, two cities Ceuta and Melilla in the North African mainland and several small islands in the Alboran Sea near the Moroccan coast. It is the only European country to have a border with an African country (Morocco) and its African territory accounts for nearly 5% of its population, mostly in the Canary Islands but also in Ceuta and Melilla.
Spain has an area of 505,990 km2 and population of over 46 Mio. people. [R1]

The very first stamp of Spain issued in 1850, but it took 75 years untill some dinosaurs appeared on Spanish stamps. However there are many postmarks and some stamps of Spain depicting some prehistoric animals on cave paintig of Altamira cave.
Stamps in Spain are distributed and sold by the Spanish postal service known as the Correos y Telégrafos, and beginning in 2001 officially a governmental corporation, the Sociedad Estatal de Correos y Telégrafos, S.A. Since 2011 the corporation and its subsidiaries are known as the "Grupo Correos". [R2]
There are several philatelic clubs in various regions of Spain who produce some personalized stamps with fossils and reconstrution of prehistoric animals who roamed at their areas.

[1] The stamp in the middle of the second row, shows the paleoanthropological excavation at Atapuerca and a skull of Homo erectus found there.
The Archaeological Site of Atapuerca is located near the city of Burgos, in the Autonomous Community of Castilla y León, in the North of the Iberian Peninsula. The property rich fossil record of the earliest human beings in Europe, from nearly one million years ago and extending into the Common Era. It constitutes an exceptional scientific reserve that provides priceless information about the appearance and way of life of these remote human ancestors. The Sierra de Atapuerca sites provide unique testimony of the origin and evolution both of the existing human civilization and of other cultures that have disappeared. The evolutionary line or lines from the African ancestors of modern humankind are documented in these sites. [R3]

[3] On May 7, 2015, Post Authority of Spain issued the first stamps of Dinosaurs. The set contain four stamps each one printed with different technique: scales texture, Augmented Reality, phosphorescence, 3D and special glasses, which allows to some of the effects. All of the dinosaurs shown on the stamps are "classical", well known to wide public, but fossils of none of them are found in Spain. The dinosaurs are depicting at "children draw" style, another wekness of these stamps is the price. Euro 2 each it is very expensive even for European country and make their postal usage very limited. Seems as they issued with a purpose to be sold for collectors, rather to be used on letters, therefore these stamps are marked as undesired.

[4] On June 30, 2016, Post Authority of Spain issued the second stamps of Dinosaurs (first set issued in 2015). The set contain four stamps each one printed with different technique: scales texture, Augmented Reality, phosphorescence, 3D and special glasses, which allows to some of the effects. Distinguished from stamps of 2015 when all shown dinosaurs were well known to wide public: Ankylosaurus, Triceratops, Tyrannosaurus, Diplodocus, this year only "local" dinosaurs are depicting. Euro 2 each is very expensive even for European country and make their postal usage very limited. Seems as they issued with a purpose to be sold for collectors, rather to be used on letters, therefore these stamps are marked as undesired.

The stamp is dedicated to province Teruel, shows varios sighseeing and local food of the area. Dinosaur's head can be seen on the bottom-right corner of the stamp. The head belongs to Aragosaurus dinosaurs. Aragosaurus (meaning "Aragon lizard") was a genus of sauropod dinosaur from the Early Cretaceous period of Galve, province of Teruel, in the autonomous territory of Aragón, Spain. Aragosaurus was a large, quadrupedal plant-eating dinosaur, which lived about 133-125 million years ago. It was about 18 metres in length and about 28 tonnes in weight. Like other sauropods, it had a long neck, a long powerful tail, a small head and a bulky body. Another dinosaur found in Teruel province is Turiasaurus riodevensis, who was also a sauropod dinosaur, is believed to be the largest dinosaur ever found in Europe, and is among the largest dinosaurs known to datw, at 36–39 metres in length and with a weight of 40 to 48 tonnes.

Pitty that none of this unique dinosaur are shown on Dinosaur stamps of Soain in 2015 and 2016.

[6] Dinosaur's footprint depicting on the left side of the stamp "12 MONTHS 12 SEALS. THE RIOJA".
More than 120 million years ago in this place, Enciso, lived dinosaurs . They lived in a unique enclave, in the ancient Sea of ​​Tethys, where they left their mark. Today we continue to be amazed with its habitat, its diet, its way of life, hunting ... that is, with the authentic nature of the great saurians


Some personalized stamps of Spain related to Paleontology and Paleoanthropology: fossils, prehistoric animals


Notes:
[SP1] Issued by the Granada Philatelic and Numismatic Society and the Arrayanes Collectors Club, to commemorate the 30th anniversary of the "great "Discovery, in 1982, of the remains of the woolly mammoth (Mammuthus primigenius), in the so-called" peat bog "of La Laguna , in the Granada town of El Padul. [R12]

[SP2] Issued by Granada Philatelic and Numismatic Society, the Arrayanes Collectors Club, of Granada, the City Council of Orce and the scientific team of the IPHES ( Institut Català de Paleoecologia Humana i Evolució Social ).
The stamp shows a "milk" tooth of 10 years old child , found at Orce, Granada province of Spain. The tooth is about 1.4 million years old and is one of the oldest human fossils in Europe. [R13] 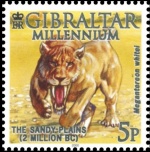 [SP3] The stamp show a jaw of Saber-toothed tiger: Megantereon whitei, that discovered at "Venta Micena" site by Orce village at Granada province of Spain.
Issued by "Arrayanes" Collectors Club of Granada to commemorate 20 years since publication of "Presence of the African Machairodont Megantereon whitei
(Broom, 1937) (Felidae, Carnivora, Mammalia) in the Lower Pleistocene Site of Venta Micena (Orce, Granada, Spain), with some Considerations on the Origin, Evolution and Dispersal of the Genus". [R14]

[SP4] Issued by "Arrayanes" Collectors Club of Granada. The stamp shows reconstruction and some fossils of Anancus arvernensis species Mastodon, that found in the Bastetan paleontological deposit called "Baza-1", excavated in summer 2017. [R10]

[SP5] On celebration of its 25th anniversary Mufomi Fossils and Minerals museum of Elgoibar issued two personalized stamps. One shows a mineral, another an Ichthyosaurus, Mixosaurus specie.
Mixosaurus was a small to medium-sized ichthyosaur, not growing more than 2 meters in total length with small species not growing more than 1 meter.
Mufomi, in Elgoibar, offers the largest collection of fossils and minerals in Euskadi (an autonomous community in northern Spain ). The museum is divided into two rooms. The first one is dedicated to invertebrate fossils and fossils from Euskadi. In the other room are exhibited vertebrate fossils and minerals collected from corners of the world. Pity they depict a foreign animal (Mixosaurus fossils have been found near Italy–Switzerland border and in South China) instead of a local one.

[SP6] Issued by the Society of Friends of the Museum of Natural Sciences of the University of Zaragoza (SAMPUZ) and Philatelic Association Zaragozana (ASFIZA), with the purpose to promote fossils of Aragon in different locations of Spain and even abroad.
Aragon is a landlocked, autonomous, region in northeastern Spain comprising the provinces of Huesca, Zaragoza and Teruel. Its capital is Zaragoza (also called Saragossa in English).
Fossils on stamps are:
Ammonite Albarracinites albarracinensis from Albarracín (Teruel)
Trilobite Acadoparadoxides mureroensis from Mureo (Zaragoza)
Skull of marine crocodile Maledictosuchus riclaensis from Ricla (Zaragoza). [R9]

[A2] Prehistoric horse shown on one of the cave painting stamps.

[A3] "Cave of Altamira" and Bison priscus, also called Steppe Bison, depicting on the background. The bison is from the cave painting found in the cave, it can be also seen on stamp from 2015 as well as on many postmarks of Spain.


The steppe bison or steppe wisent is an extinct species of bison that was once found on the mammoth steppe where its range included Europe. Steppe bison appear in cave art, notably in the Cave of Altamira and Lascaux, and the carving Bison Licking Insect Bite, and have been found in naturally ice-preserved form. [R5]

The Cave of Altamira, declared a World Heritage Site by UNESCO in 1985, is the reason for this emission consisting of a block leaf, printed with a slight relief to simulate the original cave, reproduces one of the best known rock paintings. Located in the municipality of Santillana del Mar (Cantabria), Altamira Cave was the first place in the world to identify the existence of rock art during the Upper Palaeolithic period. The discovery was made by the scholar Marcelino Sanz de Sautuola, who visited the cave for the first time in 1875, when official science did not admit the existence of art in the Paleolithic period. The cave is more than 270 meters long, with an irregular layout by different rooms, covered with paintings made some 15,000 years ago. The most famous is the polychrome ceiling, with figures of large red horses, bison, deer, bulls, hands painted in positive and negative, signs, points and other representations. [R6]

[A4] The Museo Nacional de Ciencias Naturales (Spanish: National Museum of Natural Sciences) is the National Museum of Natural History of Spain. It is situated in the center of Madrid, by the Paseo de la Castellana. It is managed by the Spanish National Research Council. The Museum was created in 1772 by Charles III of Spain as the Gabinete Real de Historia Natural, changing names several times until its current denomination.
The museum has significant collection of fossils, for example:
A Megatherium americanium brought from Argentina in 1789 and depicting on margin of stamps sheet (bottom-right corner)
A Diplodocus donated by Andrew Carnegie to Alfonso XIII of Spain. [R7]

[A5] The famous Asturian jet (also called black amber) is an organic gemstone, highly valued for its excellent cutting qualities, and attaining a typical shine and intense black colour after polishing.
Specialist studies determine that the woody material , which becomes a humic carbon, perihydrogenated during the Kimmeridgian age (Late Jurassic) around 155 million years ago, underwent particular circumstances while it formed, such as impregnation with hydrocarbons, which gives it some of its unique features and exceptional stability for use in jewellery making.

[CO2] The National Museum and Research Center of Altamira (Spanish: Museo Nacional y Centro de Investigación de Altamira) is a center dedicated to the conservation of, research into and the sharing of information about the cave of Altamira in Santillana del Mar (Cantabria, Spain), named a World Heritage Site by Unesco. [R8]