South Georgia and the South Sandwich Islands (SGSSI) is a British Overseas Territory in the southern Atlantic Ocean.
It is a remote and inhospitable collection of islands, consisting of South Georgia and a chain of smaller islands known as the South Sandwich Islands. The territory's total land area is 3,903 km2. The Falkland Islands are about 1,300 kilometres west from its nearest point.

South Georgia became a base for whaling beginning in the 20th century, until whaling ended in the 1960s. With the end of the whaling industry, the stations were abandoned.
Nowadays there are no permanent native population lives in the South Sandwich Islands, and a very small non-permanent population resides on South Georgia.
There are no scheduled passenger flights or ferries to or from the territory, although visits by cruise liners to South Georgia are increasingly popular, with several thousand visitors each summer.


Some stamps of South Georgia and the South Sandwich Islands to consider: contributors to Paleontology science


[1] Sir Alister Clavering Hardy (10 February 1896 – 22 May 1985) was an English marine biologist, an expert on marine ecosystems spanning organisms from zooplankton to whales.

Hardy visited the islands iin 1024-1925 and helped design the shore laboratory on South Georgia (Discovery House) that is still standing today. IN 1926-1927 he publishes a papper about marine life at the islands - "The Plankton of the South Georgia Whaling Grounds and Adjacent Waters". [R3]
In 1960 he published a hypothesis that assumes that in the evolution of man the ancestors of man from the present time lived intensively in water for a long period of time. He argued that a branch of apes was forced by competition over terrestrial habitats to hunt for food such as shellfish on the sea shore and sea bed, leading to adaptations that explained distinctive characteristics of modern humans such as functional hairlessness and bipedalism
This hypothesis known as the aquatic ape hypothesis (AAH), also referred to as aquatic ape theory (AAT) or the waterside hypothesis. [R4] 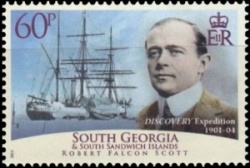 [2] On the stamps wurh face value of 60p shows Robert Falcon Scott
Robert Falcon Scott CVO (6 June 1868 – 29 March 1912) was a Royal Navy officer and explorer who led two expeditions to the Antarctic regions: the Discovery expedition of 1901–1904 and the ill-fated Terra Nova expedition of 1910–1912.
Scott and his companions died on the second expedition. When Scott and his party's bodies were discovered, 16kg of Glossopteris tree (an extinct beech-like tree from 250 million years ago) fossils from Queen Maud Mountains found next to their bodies, which they had dragged on hand sledges. More details are here.