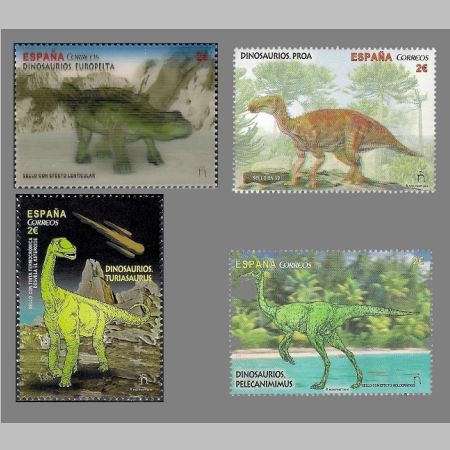 On June 30, 2016, Post Authority of Spain issued the second stamps of Dinosaurs (first set issued in 2015). The set contain four stamps each one printed with different technique: scales texture, Augmented Reality, phosphorescence, 3D and special glasses, which allows to some of the effects.

Distinguished from stamps of 2015 when all shown dinosaurs were well known to wide public: Ankylosaurus, Triceratops, Tyrannosaurus, Diplodocus, this year only "local" dinosaurs are depicting. Euro 2 each is very expensive even for European country and make their postal usage very limited. Seems as they issued with a purpose to be sold for collectors, rather to be used on letters, therefore these stamps are marked as undesired.

"Four new stamps shows the images of these some creatures that disappeared from Earth more than 65 million years ago. Dinosaurs who star in the series this year are: Europelta, which is printed with the technique called lenticular printing, the Pelecaniminus whose image has been printed with holographic ink, the dinosaur known as Proa presented in a Premium Pliego 3D and finally Turiasaurus, printed with thermo chromic ink that changes color when subjected to temperature changes.