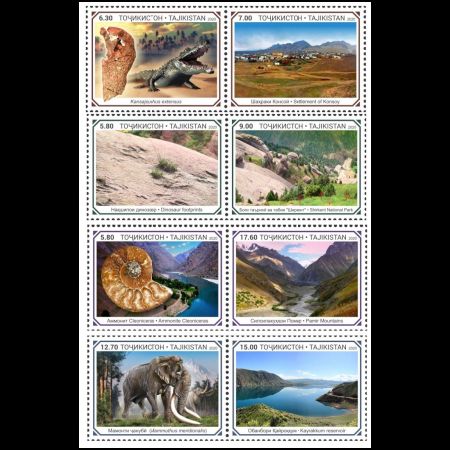 On December 20th, 2020, Stamperija agency from Lithuania issued a set of 8 stamps on behalf of Tajikistan - "Paleontology of Tajikistan".
Distinguished from many other stamps of the agency, these stamps shows prehistoric animals who roamed on territory of modern Tajikistan.

These stamps issued in four Mini-Sheets. Every Mini-Sheet contains four pairs of stamps. Each pair of stamps has a common organization. The left stamp in the pair shows a fossil, a footprint or a reconstruction of a prehistoric animal, while the stamp on the right shows a view of the landscape of the sites where these fossils were found. On the left side of the sheet is a short explanation in Tajik and English describing the context of these fossils.

A reconstruction of the prehistoric animal in its environment is shown on the bottom of the sheet. According to the stamp designer, to recreate the living animal, he just manipulated stock images of the agency.

The stamp designer, Mr. Rezo Kaishauri explain:
"The client provided us with a detailed concept, and my job was simply to visualize it. In this particular design there was no sketching or painting involved. The mini-sheet artwork is mostly based on extensively manipulated stock images. As for the stamps, some of them feature graphically edited material, but real-life location photographs were also used, as per request of the client who was aiming for a seamless transition from prehistoric imagery into present reality."

Many single bones and bony armor were found by Soviet paleontologists near the village of Konsoy in the Sughd region of Tajikistan. Unfortunately, a complete skull has yet to be found for this species.
1964-1967 expeditions of Paleontological Institute (PIN) in Moscow, led by A.K. Rozhdestvensky and I.M. Klebanova (Novodvorskaya after she married in 1968).
1968 expedition of Leningrad (nowadays Saint Petersburg) State University , led by of L.A. Nesova.
All of these fossils are stored in Moscow and Saint Petersburg to date.

This paraligator was described in 1975 by the Soviet paleontologist from Paleontologic Institue in Moscow - Mikhail Efimov (1947-2017), who assigned the paraligantor to Goniopholididae family.
The name Kansajsuchus extensus refers to the village name where fossils of the animal are found and means "large crocodile of Kansaj".
Kansaj is the Russian name of Konsoy village and used in many Russian articles and scentific books and even in English articles written by Soviet and Russian paleontologists.

In 2018, international team of paleontologists from Vertebrate Zoology Department, Saint Petersburg State University in Russia and Department of Paleobiology, National Museum of Natural History, Smithsonian Institution in USA performed phylogenetic analysis of Kansajsuchus extensus fossils from Konsoy village in Tajikistan and Shach-Shach village in Kazakhstan. In total, over 400 fossils of this prehistoric animal were analyzed. Result of this analysis allowed reinterpretation of the morphology of the animal and reassignment it to Paralligatoridae family.

This Tajk paraligator, a contemporary of the dinosaurs, was comparable in size to large present-day members of the genus Crocodylus, with estimated total length of 5–7 meters and a dorsal cranial length of up to 70–80 cm.
One of the cranial bones (an isolated right premaxilla in dorsal) is shown on the left side of the stamp with reconstruction of this prehistoric animal.

Kansajsuchus extensus is one of the largest known members of the derived Neosuchia (a clade within that includes all modern extant crocodilians and their closest fossil relatives) , which were typically small to moderate-sized animals.

Similar to modern alligators Kansajsuchus had special skin ossifications - scutes that, like armor, protected the back bone and belly of reptiles during fierce battles with prey or other crocodiles.
This prehistoric animal was even big enough to attack some dinosaurs.
Fossils of some hadrosaurid dinosaurs, similar to Bactrosaurus johnsoni from the Iren Dabasu Formation of China, discovered by the same Soviet expedition of A.K. Rozhdestvensky in 1960s near Konsoy village too.

Shirkent Valley was established a Nature Reserve in 1991, to preserve unique natural and geological environment.
The most significant among the geological objects are three locations of dinosaur traces: "Shirkent-1" , "Shirkent-2" and "Kharkush", with a total of over 400 footprints.
Initially it was planned to build visitor observation stations and staircase to allow easier access to the tourists, as well as some sheds over the footprints to protect it from erosion and rain.
Unfortunately after 30 years, nothing has been done to protect these fossils. The few tourist who visit this area per year have to climb to the tracks and rest on the stones under some trees.

"Shirkent-1" site discovered in 1963 by two Tajik geologists Sergey Zakharov and Firdavs Khakimov during their study of Cretaceous rocks in the valley.
This site with eight tracks of dinosaur footprints from Late Cretaceous period, located on one of the right banks of the Shirkent River, slightly above the village of the same name.


These footprints make up two sets of tracks consisting of 7 footprints. The footprints were named “Macropodosaurus gravis” which means “big-legged, heavy lizard".
(Macropodosaurus gravis is not a dinosaur species name, but an ichnotaxon - the name of the footprints itself).
Three tracks are very well preserved and clearly show the boundaries of the foot – four fingers and claws.
The average size of these footprints is 53 cm by 29 cm with a depth of 3-5cm. The length between footprints is 75cm. These footprints were made into muds on the shoreline. At the same site are fossils of marine gastropods indicating that the footprints are from a coastal setting.
It was described and named in 1964 by Soviet paleontologist S. A. Zakharov.
In 2006, Russian paleontologist Andrey Sennikov from Paleontological Institute of Russian Academy of Science, re-examined these footprints and concluded that these tracks, most likely belongs to a therizinosaurid dinosaur.
Therizinosaurs (once called Segnosaurs) were small to giant-sized, mainly herbivorous, theropod dinosaurs that have been found across the Early to Late Cretaceous deposits in Asia and North America.

"Shirkent-2" site is located about five kilometers from the mouth of the Shirkent River, almost at the watershed of the left side of the river. Discovered in 1984.
This site contains about 300 footprints and it is the biggest dinosaur footprint site in Tajikistan.
Three types of three-toed footprints of Jurassic dinosaur, dated 164.7 - 155.7 million years ago, can be seen at this site.
Most of the footprints are 50 cm long but some up to 65 cm long have been found. The footprints are up to 45 cm wide.
Type I and II (on the image in the right) belongs to bipedal (walking on two legs) Theropod dinosaurs, when type III belongs to a big Sauropod dinosaur. As the tracks only show footprints from the back legs, this Sauropod was probably bipedal too.
These footprints (not dinosaurs) called: Shirkentosauropus shirkentensis (type I), Regarosauropus manovi (type II) and Mirsosauropus tursunzadei (type III).
Shirkentosauropus named after the valley.
Regarosauropus named after the region name, nowadays called Tursunzoda.
Mirsosauropus named after famous Tajik poet Mirzo Tursunzade, who was born somewhat east of the location of the tracks in the Karatag village.

"Kharkush"" site, discovered in 1983 located in the area of ​​the Pashmi-Kukhna village and has three dozen footprints of only one three-toed dinosaur, but a real giant.
These footprints (not dinosaur) called Kharkushosauropus kharkushensis.
The length of his feet exceeds 70 cm, the width reaches 60, and the depth of the tracks in some places reach 10 cm deep.

On top of the dinosaur tracks there are also some fossils of marine mollusks and even their traces and signs of giant sea waves that are preserved on the sea bed, can be seen in Shirkent National Park - more great stuff from Mesozoic era.

Due the fact that there are any fossils of the dinosaurs who leaved their tracks in the Shirkent National Park are found, it is hard to estimate how they looked in a live.
The footprints Shirkentosauropus shirkentensis probably belongs to a genus of large carnivorous theropod dinosaur, who might look similar to the well known Jurassic dinosaur Allosaurus.
Most Allosaurus fossils were found in North America from the Morrison Formation, USA. Some fossils of this dinosaur are also known from Portugal and have been shown on Portuguese stamps in 1999 - 2002 and in 2015. 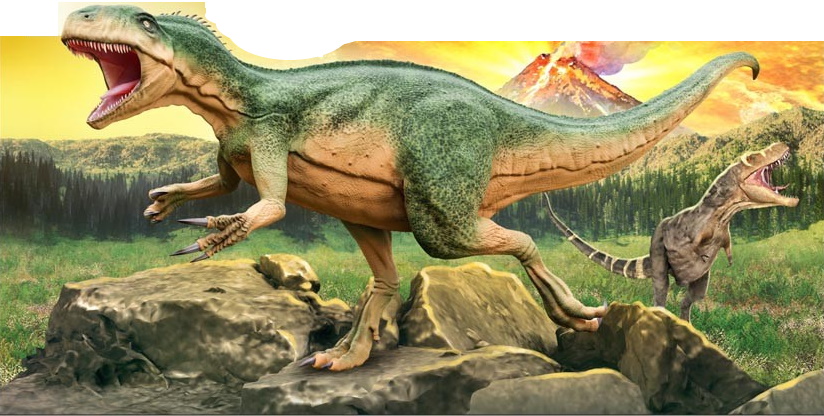 Mr. Kaishauri said about his artwork of the mini-sheet margin: "As the client explained in his brief, there is no way of knowing for sure what those dinosaurs actually looked like, but still, I was provided with a visual approximation which looked a lot like an Allosaurus , so I decided to use slightly modified Allosaurus images for that particular sheet design."

Ammonite Cleoniceras from the Pamir Mountains

Ammonites formally Ammonoidea, are subclass of extinct Cephalopoda.
This group of extinct marine mollusk are more closely related to living coleoids such as octopuses, squid, and cuttlefish, than they are to shelled nautiloids such as the living Nautilus species.

The earliest ammonites appeared during the Devonian Period (419 million years ago), and the last species vanished in the Cretaceous–Paleogene extinction (66 million years ago) event.
Ammonites are excellent index fossils, because of their wide geographic distribution in shallow marine waters, rapid evolution, and easily recognizable features, it is often possible to link the rock layer in which a particular species or genus is found to specific geologic time periods.
Their fossil shells usually take the form of planispirals, although there were some helically spiraled and non-spiraled forms (known as heteromorphs).

The species lived in ancient seas that covered the territory of modern Tajikistan about 120 million year ago.
Its fossils are can be found in valleys of Pamir, in Gorno-Badakhshan region of Tajikistan.

The Southern mammoth (Mammuthus meridionalis) is one of the oldest mammoth species that lived during the Early Pleistocene (2.6-0.7 million years ago) in Europe and Central Asia. This prehistoric animal was one of the biggest in the Mammoth family and reached 4 meters high at the withers, with estimated weight of 10 tonnes.
Teeths analysis of Mammuthus meridionalis indicates that it does not seem to have specialized in eating grasses like later species of mammoth‭, the Woolly Mammoth (Mammuthus primigenius) for example. Its teeth were better adapted to eating leaves with the presence of ridges running atop low crowns The Southern mammoth was more at home in‭ ‬woodland habitats that had a variety of trees and shrubs that it could browse from.‭
‬
Some bones and a skull of Mammuthus meridionalis discovered on the shore of the Kayarakkum Reservoir in summer 2013.
Estimated age of the fossil is about 1.5 million years. It was excavated and transported to Sughd Regional Museum where it is on display now.